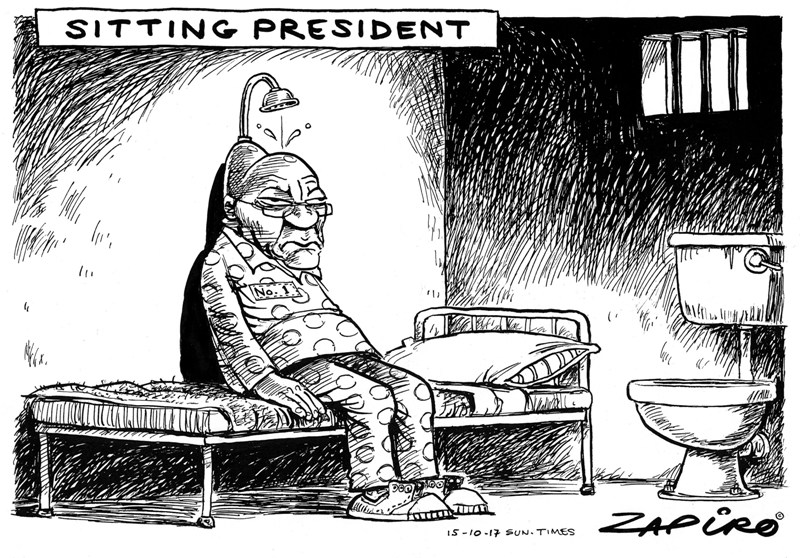 EDINBURGH — State capture is the term given to the worst financial scandal in South Africa in decades. It refers to the strategy by politicians, headed by former president Jacob Zuma, and friends to use legal and illegal means to squeeze funds out of state coffers. State capture also entails the use of public tenders and contracts to divert money from state entities. The proceeds of state capture have ended up in bank accounts around the globe. The Gupta family, Indian immigrants who built a business empire and grew obscenely rich very quickly in South Africa by working their political contacts and corrupting officials, are the best known culprits. But brothers Ajay, Atul and Rajesh are in hiding, most probably in Dubai where they bought a mansion on South African taxpayers’ backs. In this article, veteran journalist Ed Herbst assesses who is likely to go to jail first for state capture. – Jackie Cameron

On 16 November the News 24 website posted an article headlined State Capture: Who will go to jail first?

It was written by News 24 editor Adriaan Basson and my response is that we are not fussy – any high-profile ANC snouter will do, even if he/she was not involved in the Zuptoid State Capture project.

Given the ANC’s taxpayer-funded ‘Stalingrad’ strategy, I predicted on this website that the first orange-overall candidate of the Ramaphosa era would be Rubben Mohlaloga who was one of the ringleaders in a snouting attack on the Land Bank which was not as successful as the first – ask Helena Dolny, she’ll tell you.

I emailed Phindi Louw, the NPA spokeswoman for the North Gauteng area and asked her for the sentencing date. She replied on 31 September saying that it was on 24 February next year, but when I checked I found that this was Sunday.

I replied by email on the same day pointing that the date must be incorrect. I also suggested that, to save further inconvenience to her, it would help if she gave me the contact details of the prosecutor in the case with whom I could liaise directly.

There was no reply so nine days later I sent a polite email reminder pointing out that our courts do not sit on Sunday.

Again there was no reply.

Anyone who reads news reports either in the printed or online media will know that not a day passes without a reporter carefully noting that no response was received from the civil servants whose salaries are paid by you and me but who slip under the radar the moment there is a crisis or the potential of bad publicity. I call such people ‘Silent Spokespinners’ – see here and here.

No matter – we now have an approximate date and I am hoping that our print and broadcast media court reporters will be there to cover the hearing – President Cyril Ramaphosa was elected on an anti-corruption ticket as he pointed out in Davos and I am sure he would welcome such media coverage. After all, the last deployed cadre to be swiftly investigated, charged and jailed was Cynthia Maropeng and that was because she stole ANC constituency funds rather than from the fiscus to avoid being trampled in the Gadarene rush to the trough.

If you tend to suffer from the festive season blues, read Desiderata, remember that a hug-a-day works wonders especially in the long term and retain hope in the Glorious National Democratic Revolution South Africa because, if you play your cards right, you too can become incomprehensibly wealthy without doing anything of benefit for the mining industry – ask Baleka Mbete and Ashwin Willemse – they’ll tell you.

Count your blessings – at least you don’t have to live in the dank and foetid basement of Luthuli House like my Browse Moles or wear a hard hat inside like the wretched inmates of the state broadcaster’s rotting Auckland Park edifice who live in constant fear of falling masonry.

And, as you sing “I’m dreaming of a dark Christmas” – the local version of the world’s best-selling single – hear my plea.  Ignore the Siren Song of the Saxonwold Shebeen and its promises of half-price Johnny Walker Blue by the flagon, avoid Gavin Watson, don’t apply for a job at Independent Media and, if you’re driving, try not to be as sober as an ANC-protected judge.