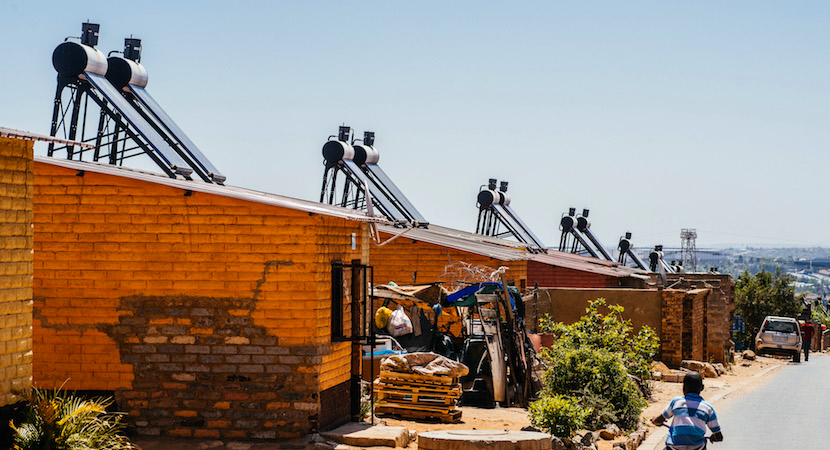 CAPE TOWN — When the ANC coined the phrase “Sekunjalo,” it was meant to signify finally having achieved freedom and that “now is that time.” Little did the authors know that 28 years later, analysts and leaders would be exhorting people not to vote to empower themselves, but to install solar heaters because the ruling party had effectively mismanaged Eskom into the ground. What Chuck Stephens, Executive Director of the Desmond Tutu Centre for Leadership, is calling for here is an act of country-wide patriotism that will help the faltering power-utility stagger back to its feet. And, he says, now is the time. That’s because it’s never been more urgent. Only an estimated 10% of South Africans have converted to solar, a full 40% short of the National Development Plan goal 12 years hence. The thing about empowerment, whether it be corporate or individual, is that it uplifts both. The personal benefits – which as outlined here are pretty substantial – become the political. Whether you’re a survivalist who’s given up on the ruling party delivering even the most basic of services at any level of government, or a believer in collective Ubuntu, this suggestion has serious voltage. – Chris Bateman

At this point in time, decommissioning your “electric geyser” and replacing it with a solar water heater, could be construed as an act of patriotism.

Load-shedding sucks, so every homeowner that can get off the grid and tap into the sun’s rays for domestic water heating is acting out of good citizenship.

Half of the electricity consumption in every home is to heat its water. For baths, for showers, for washing dishes, for washing clothes, etc.

There are about 55m people in South Africa. If the average family aggregate is 5 people per house, then there are about 11m homes. Only about 1m homes so far – not even 10% – have converted to solar.

The National Development Plan calls for a 50% density of domestic solar water heating by 2030. We are not at 10% density yet. This additional 4m homes constitutes a HUGE business opportunity for manufacturers of reliable products, and for installers.

As youth will be affected by Global Warming more than anyone, they deserve to occupy this business “niche”.

Typically, electricians don’t like to get involved with water – because mixing electricity and water is a recipe for trouble. And plumbers like to stay on the ground, or to dig underground. But up on the roof is not their natural habitat. ENTER STAGE LEFT: the Solar Fitter.

Now there are some new “green occupations”. They are being trained by technical colleges, funded by the Energy and Water SETA. They may still be rated as a “scare skill” because Demand is rising faster than anyone can train them.

Demand because the lights are going out – so you get a cold shower when you wake up in the morning. Demand because industries are pinching because of all the “down time” when they are load-shedded. Demand because it is now against the law to install an electric geyser in a new house under construction.

Read also: Sunny days and solar ways: How Africa must and should plug its electricity gap

Devices come in different shapes, sizes and cost ranges. One distinction is between a flat “solar panel” and the “evacuation tubes”. Because solar-thermal requires the tank to be above the heating device, the evacuation tubes mean mounting a new tank on your roof with them. This feeds down into your house by gravity.

Whereas with a panel, you can still have the new tank up on the roof too. Or you may be able to keep it in your attic? (As long as your roof will allow the solar panel to be below it, in terms of elevation.)

This raises another prospect – keeping your geyser in place as your water tank, and mounting an external solar panel to feed it with hot water, instead of it containing an electrical element. This is usually called “retrofit”. There are manufacturers that actually specialise in the hardware for “retrofit” – so that you can keep installation costs down by not replacing your insulated water tank. This also cuts down on labour costs.

The financial bottom line is good news. Yes there is an initial outlay that adds up. But you get an immediate reduction on your monthly electricity bill – probably around 50% or even more. Before too long, these savings have paid you back for the conversion. Then you will have that extra monthly income to spend on other things.

But the environmental bottom line is best of all.

It takes one ton of coal to generate enough electricity to keep one electrical geyser hot for one year. So by converting to solar, you could be reducing our carbon footprint significantly. And measurably. Verifiably. No kidding.

Imagine the benefit of converting 4m more homes to solar-thermal.

That comes to 4m tons of coal PER YEAR thereafter. That’s a lot of smoke, that is right now polluting the air that you breath. Then it is mixing with the clouds and causing acid rain to fall. That sinks into the soil and contaminates the water table. The springs that feed our rivers are thus sending poison downstream, killing fish. The birds that feed on fish die from eating the poison.  And so on, down to the oceans which are getting filthy.

This is the time.

If credit is a problem for you to meet the installation costs, there is a simple solution. Start or join a solar stokvel. You know the drill.  You pay a fixed amount into it monthly, probably less than the electricity that you will save by converting to solar. Then you wait your turn. In the rotation of the stokvel, a month will come when your home is fitted with a solar water heater, just like all the other members.

A solar stokvel can also be a local investment in youth unemployment. They are idle, they need work. While you are heating your domestic water with electricity, pulling Eskom down.

This is not just good citizenship, it is patriotic.