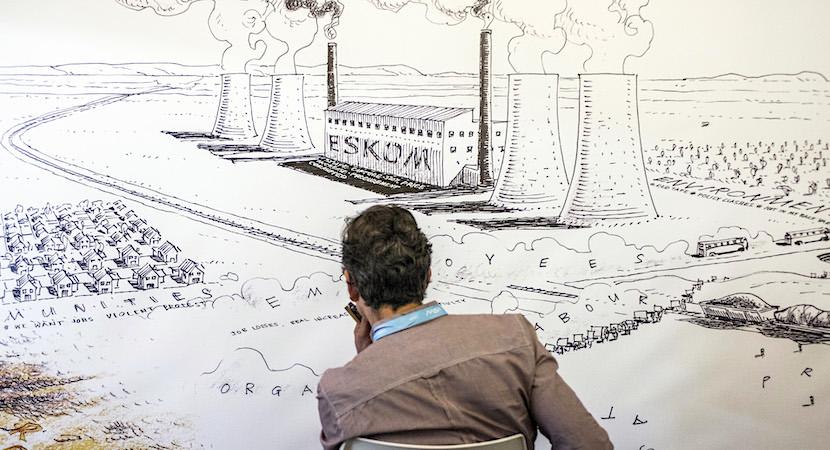 CAPE TOWN — Our Eskom crisis has three major interlinked causes, the largest of which is the dysfunctional and tardy construction of two of the world’s biggest coal-fired generating plans; Medupi and Kusile. According to Wits Business School energy fundi, Professor Rod Crompton, they are probably the largest single disaster in South Africa’s economic history. The answer to the question why is the second contributor to our predicament; patronage networks or State Capture, and their attendant corruption and poor management leading to over-staffing and neglected maintenance, resulting in constant breakdowns. The third factor? Electricity theft and an enduring culture of non-payment. Eskom is owed R30bn with arrears debt growing by R500m per month. It does not generate enough cash to pay even the interest on its own debt. Compton reminds us that Eskom’s sales have been declining by about 1% per annum. The less it sells, the higher the tariff it wants, and the higher the tariff… – the utility death spiral. Capetonians are today among the world’s most self-sufficient water users, thanks to an astute Day Zero campaign that today has about every fourth middle-class home sporting a borehole or roof-water storage system. Perhaps it’s time to extend self-empowerment nationally… – Chris Bateman

Eskom is by far the largest of South Africa’s many state owned companies. This near monopoly power utility is in crisis. It’s the single largest threat to South Africa’s economy, according to a former minister of finance.

How is power generated and distributed in South Africa?

Electricity markets in most countries consist of three parts: generation, transmission and distribution. Most electricity is generated by using heat to boil water to create steam which in turn spins a turbine that generates electricity.

South Africa’s cheap and abundant coal resources made coal generated electricity an obvious choice for many years. Initially, power stations were owned by municipalities and large mining and industrial concerns. But as the costs of recapitalisation emerged, government was persuaded to take over responsibility for power.

Eskom is among the biggest power utilities in the world, famous for its ability to handle vast tonnages of low grade coal. Eskom accounts for over 90% of power generating capacity. Its power plants are mostly coal with one nuclear station and some pumped storage (water). Only a few minor power generators have remained outside Eskom’s fold.

I don’t subscribe to the sabotage theory at @Eskom_SA I think the reality is more disturbing: eskom’s plant is in breakdown due to neglect, bad maintenance, skimping on paying for it, shocking project management, poor skills, unskilled mangers running power stations

Transmission lines end where high voltage power is stepped down to distribution networks until it reaches residential customers – at 220 volts. In many areas Eskom sells to municipal distributors.

So, Eskom is a vertically integrated near monopoly responsible for generation, transmission and distribution.

Read also: Death spiral: Eskom at risk of disappearing a decade from now

Is this monopoly situation unusual in the 21st century?

In many countries competition between power generators has been encouraged to drive down prices. Transmission, being a natural monopoly, remains just that; but like toll roads they are open to all who obey the “road rules” and pay the toll. The same goes for distribution to a lesser extent.

What’s the trouble with Eskom?

Eskom has two major problems. Its operating costs are too high and it can’t pay its debt. It owes over R400bn and does not generate enough cash to pay even the interest on its debt. It’s reached the end of the road.

Eskom has been getting steep tariff increases in recent years but these have driven some customers off-grid and shut others down. Eskom’s sales have been declining by about 1% per annum. The less it sells, the higher the tariff it wants, and the less it sells – the utility death spiral.

How did it get here?

The main cause of its troubles is its decision to build two of the biggest coal fired generating plants in the world, (Medupi and Kusile). These plants are running way behind schedule, they’re over budget and the bits that are complete don’t work properly. They are probably the single largest disaster in South Africa’s economic history.

“State capture” (patronage networks), corruption and poor management have led to over staffing and neglected maintenance, resulting in constant breakdowns. Electricity theft, a culture of non-payment and defaulting municipalities have deepened the crisis. Eskom is owed over R30bn.

What are the answers?

Eskom needs to simultaneously reduce operating costs, increase tariffs and shed a big chunk of its debt. There is no painless way for South Africans to deal with their Eskom crisis. And it can’t wait until the national elections on 8 May 2019.

President Cyril Ramaphosa appointed a team of advisers and has announced that Eskom is to be split into three subsidiaries: generation, transmission and distribution. This has been a government policy since 1998. This should increase cost and debt transparency and may lead to increased efficiencies, especially if competition is allowed.

Ramaphosa hinted that Eskom will be allowed to invest in renewables, possibly to absorb surplus staff and avoid retrenchments that have been so vehemently opposed by the unions. Some think this is too little too late. He passed the debt hot potato to the minister of finance’s budget speech on 20 February 2018.

Energy Minister Jeff Radebe said Eskom must prepare for increased competition, presumably in generation. The transmission network needs to be opened to allow this. The courts have stopped Eskom from switching off defaulting municipalities. Eskom’s crisis gets worse every day. Government will have to sort out municipal non-payment or allow towns and cities to go dark or let Eskom collapse.

Until the President’s statement, government seemed paralysed. Will words turn into the effective action that’s needed to save South Africa from its power utility?