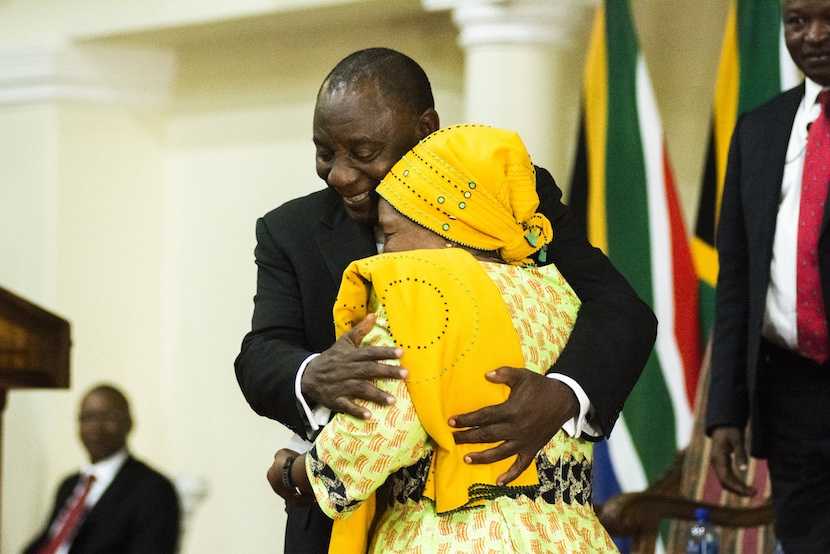 Many South Africans are puzzled by some of President Cyril Ramaphosa’s choices for his new cabinet. Take for example, his decision to include his rival for the top ANC position, former president Jacob Zuma’s ex-wife Nkosazana Dlamini-Zuma, in his decision-making team. Or, his choice for deputy president: David Mabuza is a man who has the stench of corruption swirling around him, yet Ramaphosa has promised to clean up on graft. Helping to make sense of the Cabinet make-up is Steven Friedman, a political analyst who has been studying the South African landscape for decades. Friedman highlights some shrewd choices by Ramaphosa, as well as some risky moves. – Jackie Cameron

South African President Cyril Ramaphosa has selected a Cabinet which shows that he and his allies believe they are now firmly in control of the governing party and can shape the government’s agenda. What is not yet clear is whether they are right.

Ramaphosa’s choice of cabinet was particularly important because government in South Africa is at a crossroads.

The governing African National Congress (ANC) has been the site of a factional battle between the president’s allies and supporters of former president Jacob Zuma. Ramaphosa’s group has vowed to stop the misuse of public money and trust of which the Zuma faction is accused. But their credibility is dented by, among other factors, the claim that they are too weak to counter the Zuma faction’s influence over the ANC. Their detractors point to the continued presence in the national government of ministers in the Zuma faction who are accused of abuses.

Read also: As Ramaphosa is sworn in, ANC’s two faces on display

A key indicator of whether the government can win back public trust is, therefore, who Ramaphosa appoints to his Cabinet.

Before the announcement, he and his allies seemed to face an impossible task. They had to make good on his promise to trim down the Cabinet. But they must know that, in any governing party, fewer jobs means more resentment: one reason why Zuma became ANC president at the expense of his predecessor Thabo Mbeki is that Mbeki rarely replaced ministers and so ANC politicians believed that their job prospects were slim until he went.

Second, they had to meet public demands to remove Zuma faction ministers. But governing party leaders who deny posts to their opponents within the party are likely to be accused of purging them and might be resisted by anyone outside their faction.

Given these obstacles, the Cabinet appointments send a clear message that Ramaphosa and his allies believe that, having improved the ANC’s vote compared to the 2016 local government elections – the first time in 15 years that it did better in any election compared to the previous one – they are firmly in control.

Only five of the 28 ministers are linked to the Zuma faction: one of them, Nkosazana Dlamini-Zuma, is probably no longer aligned to it. She was the faction’s choice for president but was not overly enthusiastic about its style of politics then and seems even less so now.

Dr Nkosazana Dlamini-Zuma would have been a good candidate to take over after Cyril if she didn't associate herself with the Zupta gang. I think she needs to go to the Zondo Commission & come clean about what was the deal between her, the Guptas & Zuma. We need to know as SAns!

So only one in seven ministers are aligned to Zuma’s group and none are in posts regarded within government as senior positions. The Cabinet has been reduced although, as Ramaphosa acknowledged when he announced the appointments, not as much as he would like. So unconcerned was Ramaphosa about resistance within the ANC that he appointed an opposition politician, former Cape Town mayor Patricia de Lille, as his public works minister.

Ramaphosa and his faction did not ignore resistance within the ANC. The Cabinet was announced five days after he was inaugurated, an unusually long delay: the announcement was twice postponed on the day. This signalled that there had been intense bargaining within the ANC.

The Ramaphosa group lost one important battle. They had hoped to drastically cut the number of deputy ministers but reports suggest that they bowed to resistance from various lobby groups, among them the Zuma faction: there are 34 deputies, three fewer than under Zuma. At least 12 of them are in the Zuma faction.

But their strategy seems to have been to give ground only if they believed this would not prevent them from appointing the Cabinet they needed to pursue their agenda. So, as they did when Ramaphosa chose his first Cabinet, they appointed Zuma faction members in posts which are not central to their plans or as deputy ministers, who are not members of the Cabinet and have no say over what it decides.

The Cabinet signals to the Zuma faction that the Ramaphosa group believes their star is waning and that they are not strong enough to turn the tide. They are probably right.

First, the election was a huge defeat for the Zuma faction. Three parties formed by or including politicians linked to the faction made no headway in the May election. While parties formed by supporters of factions which lost ANC battles won over 8% in 2009 and 6% in 2014, the three parties – African Transformation Movement, African Content Movement and Black First, Land First – polled 0,6% between them.

In the North West province, the removal of a Zuma faction premier and his replacement by a Ramaphosa faction appointment boosted an ANC vote which had fallen below 50% in by-elections to over 60%. If they were to lead the ANC again, it would probably lose its majority and most active ANC members must know this.

Second, Ramaphosa’s government has boosted the capacity of the National Prosecuting Authority to prosecute crimes committed by politicians accused of misusing public office. There are signs that key Zuma faction politicians are in the firing line. This will hamper their political role and further damage their credibility.

But there is a potential threat to Ramaphosa from within the ANC. Deputy president David Mabuza was a key member of the Zuma faction. He abandoned it to encourage unity between the factions and was largely responsible for Ramaphosa’s victory because he allowed his provincial delegates to vote as they pleased rather than delivering Dlamini-Zuma the block vote he had promised.

Mabuza is now politically isolated: the Zuma faction feel he betrayed him while the Ramaphosa faction never trusted him. But he seems bent on reinventing himself. In the weeks before the Cabinet appointment, it was rumoured that he would not be reappointed. He reacted by delaying his swearing in as a member of Parliament and appearing before the ANC integrity commission to answer allegations of corruption published in the New York Times. His aim was presumably to discredit the claims and so present himself as a champion of clean government and a plausible next president.

His plan worked in the short-term – he is back as deputy president. Ironically that may make it harder for him to build support. ANC history shows that candidates who are removed from government office have plenty of time to campaign for support; some have used this to win election to national or provincial office. Mabuza will now have less time on his hands to campaign behind the scenes as he tackles his governmental duties.

Is it not interesting that the @PublicProtector clears DD of wrongdoing at the same time as she finds #pravingordhan guilty of something, and Julius Malema immediately warns Ramaphosa to keep DD as his deputy but shld drop #Pravin from his cabinet? Nice co-ordination there

The odds seem stacked against Mabuza if he is eyeing the presidency, for himself or his ally Paul Mashatile, the ANC’s treasurer. But he still seems a likelier contender for power than the Zuma faction. If he does aspire to lead the ANC, the threat to the Ramaphosa group may shift from the Zuma faction to Mabuza.