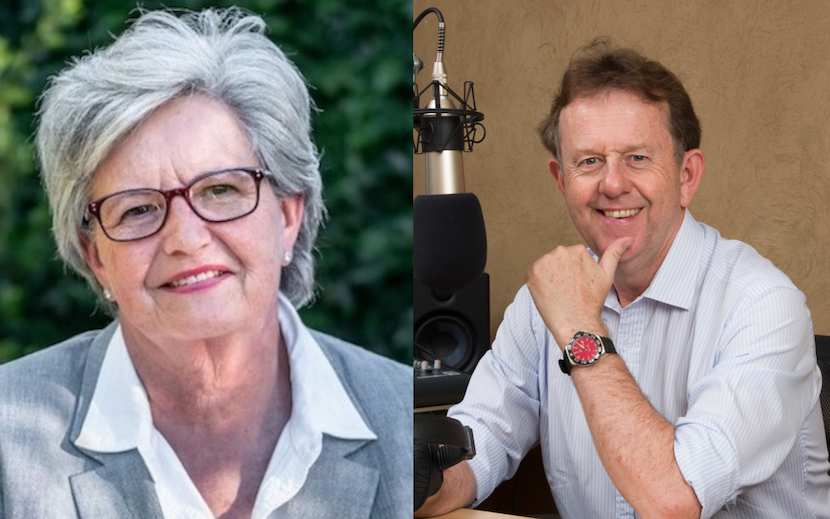 An arrest warrant has been issued for former Free State Premier and current ANC secretary-general Ace Magashule. Arrests surrounding the R255-million asbestos scandal were made last month, with corruption-accused businessman Edwin Sodi apprehended for his alleged involvement in the procurement of government funds. Since 2015, DA representative Leona Kleynhans has been chasing justice, after a whistleblower handed her documents containing information that ‘didn’t make any sense at all.’ BizNews founder Alec Hogg spoke to Kleynhans, whose initial investigation has ultimately led to the arrest warrant that was issued for Magashule today. – Jarryd Neves 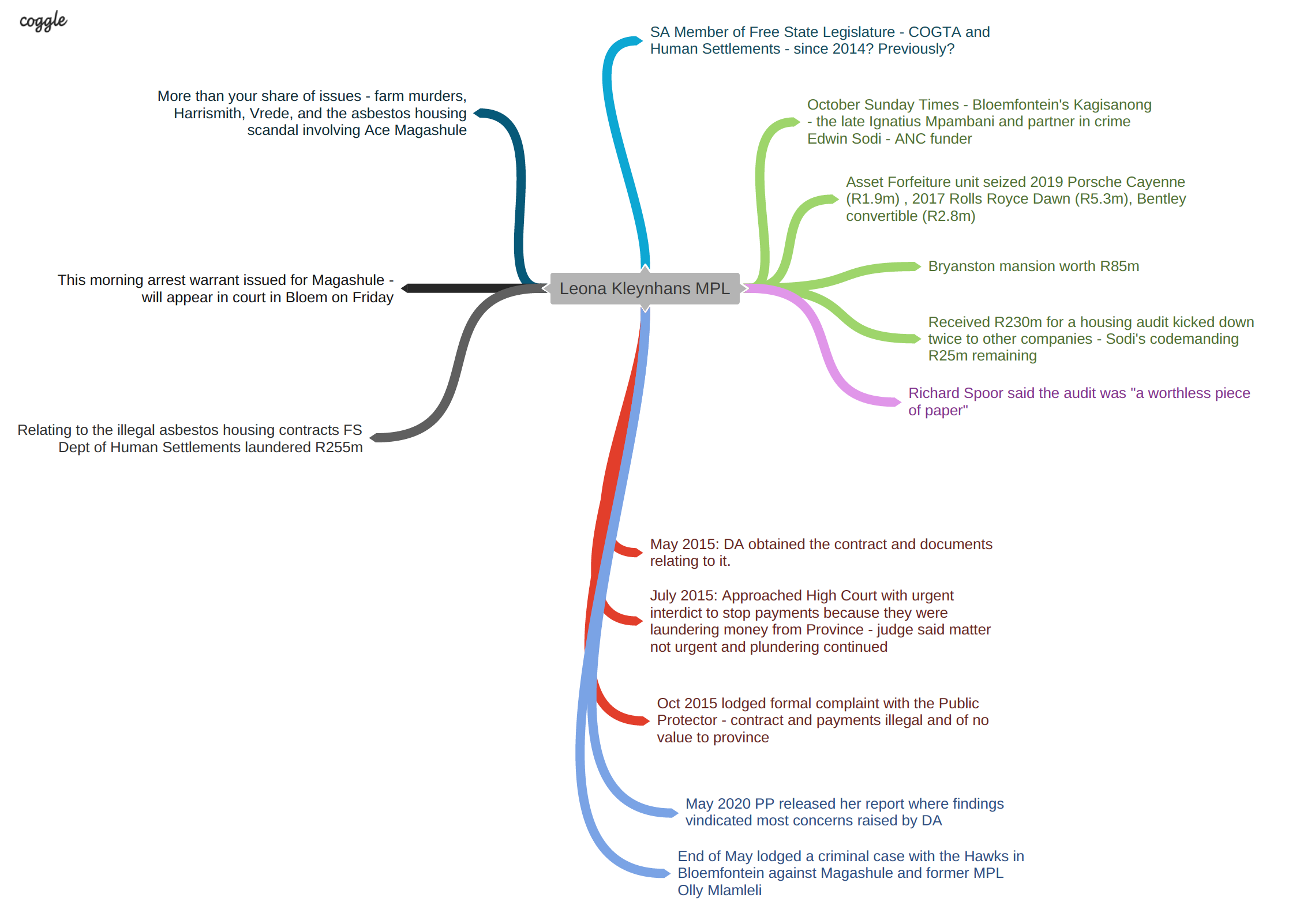 Leona Kleynhans on her background:

I had been a councillor in the Maluti-a-Phofung municipality since 2006 which had its own challenges. I was then elected to the legislature in 2014. I’ve been a politician and activist.

On the asbestos roof audit:

A whistleblower came to us with a lot of the information and said this isn’t right. There are serious things going on here and we definitely need to look at this. It was a great big sack of documents that I went through. It took about a week. I put the whole thing together and realised it didn’t make any sense at all. The contract; it had different versions. That seemed to be highly irregular. Some of the invoices had been generated by the system of the department. It didn’t have a tax number. At the end of the day, I drew up a list of all the problems that I had encountered looking at all the documents. In the caucus, we discussed it and decided that we would try for an urgent interdict in the Bloemfontein High Court, to stop payments of that contract.

On the court action:

The urgent interdict was unsuccessful because the judge deemed it to be not urgent. The HOD and MEC who were sitting in the court said, ‘no, no, no this DA member is very confused and everything is all fine and hunky dory. We need to remove and replace the asbestos roofs in the Free State.’ Now, nobody can argue with that. Except that this contract didn’t even have that in mind. The contract was to pay R255-million, simply to find houses with asbestos roofs. As I say, in court we were not successful.

I then took the whole sack of documents and went to the public protector. Lodged a complaint, gave all the evidence and our own interpretation of what we had seen in the documents and why we thought this was a highly irregular contract. That was up until May of this year, when the Public Protector’s report was released. That was a long time.

On the development of the case:

Pieter-Louis Myburgh caught onto this story and came to see me. We had meetings and I gave him most of the information I had. He was then able to do further investigation into what had actually become of the money. Which is not what I had been investigating. I simply wanted them to stop wasting the money belonging to the people. What happened this year after the Public Protector’s report was released in May – and having been vindicated in all the concerns that we had raised – we decided to go to the Hawks and lay charges against the former MEC Olly Mlamleli and against the Premier. Now, this stems from our court case of May 2015. We then said, how can it be that the MEC sat in the courtroom and heard all the discussions about the contract which we were claiming was illegal and the judge was deciding whether it was urgent or not. So basically she had to sit in the court and defend herself, then go home and pretend that everything is hunk-dory. She must have known or – at the very least – suspected that something was very irregular and very wrong.

On the involvement of Ace Magashule:

The legal advisor who had to launch a legal defence on behalf of the MEC – who we had now charged – sat in the office of the Premier. So, it’s extremely impossible that the Premier could have sat in the office where the legal advisor was discussing and coming up with a legal defence for the MEC – which had been appointed by the Premier – and the case brought by the official opposition in the province. I can’t imagine that the Premier could have not been aware of that. It was in terms of the Prevention and Combating of Corrupt Activities Act, that we then played charges  against Olly Mlamleli and Ace Magashule. That legislation says, that if you are aware of a crime and you do nothing to report or stop it, you are equally guilty.

Thoughts on why it’s taken so long:

I believe – and this is my allegation – that the politicians were involved in conceiving this entire plan. They all plotted together to rob the department. To get money out of government coffers and into the pockets of cronies. So that was the whole concept behind this contract.

On the Vrede Dairy Project:

I am aware that there have been charges laid against Ace Magashule, in relation to the Vrede Dairy Project. Now, obviously I’m not privy to what the prosecuting authorities or the Hawks are doing in relation to that, but I would not be at all surprised if other charges were possibly added – or different cases come about – with relation to other contracts, including Vrede dairy. There are many, many issues in the Free State which could come before the courts. Undoubtedly, it will not stop the asbestos case.

I have just confirmed that an arrest warrant was issued this morning for the current Secretary General of the ANC and former Premier of the Free State, Ace Magashule. This is in relation to the illegal Free State asbestos housing contracts in which the Department of Human Settlements was used as a vehicle to launder R255 million from government into the pockets of various cronies.

The matter started when the Democratic Alliance (DA) obtained the contract itself and documents related to the contract in May 2015. In July 2015, we approached the High Court in Bloemfontein for an urgent interdict to stop payments, because we were convinced that the contract had been established with the sole purpose of laundering money. The judge in the matter ruled that it was not urgent, thus sadly paving the way for the illegal payments to continue.

However, in October 2015 the DA lodged a formal complaint with the Public Protector (PP) in relation to the contract. Our complaint included our belief that the contract itself was illegal, that the payments were illegal, and that the entire project had been of no value to the Department nor to the Free State.

In May this year, the PP released her report in which her findings vindicated most of the concerns raised in our complaint. It was clear from the findings that the contract had been illegally entered into, that the payments had been illegal, and that the contract had not been value for money. The recommendations in the report were that the Premier should hand over the matter to the SAPS with a view to investigate the Head of the Department, Tim Mokhesi. The report went on to state that other senior officials should face an internal investigation.

At the end of May this year, we lodged a criminal case with the Hawks in Bloemfontein against the former MEC Olly Mlamleli, who had been the second respondent in our 2015 case, as well as against former Premier Ace Magashule for his dealings in the matter.

Ms Mlamleli had been seated in the court-room when the urgency of our application had been discussed. Our case was in terms of the Prevention and Combating of Corrupt Activities Act, which makes a person in a position of authority, equally guilty if he is aware of a crime taking place and does not act to prevent it. Ms Mlamleli was arrested and has appeared in court, with her trial set to continue in Bloemfontein tomorrow.

Our complaint against Ace Magashule, stemmed from the fact that at the time of our 2015 court case, the state legal advisor Mr Bertus Venter, had been seated in the office of the Premier, and that this office had been tasked with launching a legal defence on behalf of the MEC which the Premier had appointed. It is impossible that the Premier could not reasonably have known that his MEC had been dragged to court by the Official Opposition in the Free State Legislature.

We are very happy that at last the man who has been plundering the province and impoverishing its citizens since 1994 will face justice. He has acted with impunity for twenty six years, and the DA’s legal battle which lasted over many years has at last brought Mr Magashule before the law. Magashule still has many other issued, among others the Vrede Dairy Project, that he has to answer for before the courts.

The tragedy of the destruction of the Free State and the plundering of state coffers by Mr Magashule will hopefully now be brought to an end as the wheels of justice turn against him. The wheels of justice do indeed turn exceedingly slow, but the DA will continue to ensure that its inexorable movement will not be stopped.

If this is indeed true, it must be welcomed with cautious optimism.

An arrest is one thing, but what really matters is a successful prosecution…

It’s about time the law caught up with #AceMagashule https://t.co/7LQPpxLqmP

I wonder what’s going on within the ANC Top Six, Integrity Committee, NEC and other formations. The #MKMVA through Carl Niehaus has said it’s angered by the warrant of arrest of #AceMagashule on corruption related charges. How should @CyrilRamaphosa respond?

We want to remind South Africans that we will not stop until every last corrupt ANC cadre and politician is placed behind bars. Our country deserves nothing less. – @jsteenhuisen #AceMagashule

@MYANC Statement on the issuing of a warrant of arrest against its Secretary-General Ace Magashule. pic.twitter.com/Ih2vYIIw1f