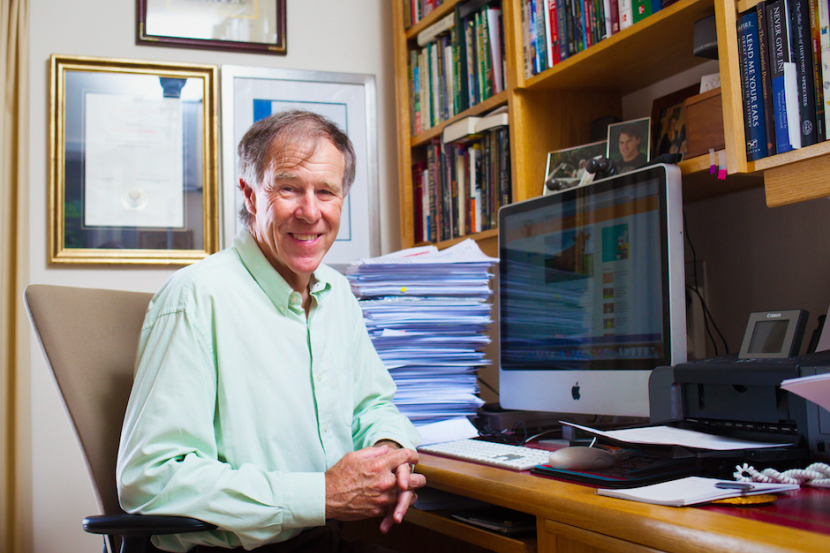 Tim Noakes is South Africa’s best-known sports scientist. He survived a gruelling legal battle over four years to defend his belief that a low carbohydrate, high fat diet is better for your health than a high carbohydrate, low fat diet. Noakes told BizNews about his new book, The Eat Right Revolution: Your Guide to Living a Longer, Healthier Life (co-authored with journalist Marika Sboros) and sets out some modifications to his LCHF theory – with particular insights on how women can lose weight. Insulin resistance is a key focus in this interview, too, with a large number of diabetics among those who have died of Covid-19. – Jackie Cameron

The biggest predictor for risk of Covid is what no one’s is told. You’re told to do X, Y and Z, but you’re never told that if you got visceral fat – which is fat stored inside the gut – around the intestine, but particularly in the liver, the pancreas, skeletal muscle and the adipose tissue in the gut. People have this protruding abdomen and I think, well, that’s typical. Everyone over 30 has a protruding abdomen. That indicates that you’ve got a visceral fat. One of the interesting points is that we’re not told this.

We’re only told that vaccines can help us. We’re not told that we can do a lot more by changing our diet. It turns out that the greatest risk factor for a fatal outcome, besides age, is type two diabetes. But more investigation shows it is actually not Type two diabetes. It’s a special feature of Type two diabetes that causes fatal outcomes in Covid infections. That specific change in the body is an increase in our visceral fat content. Humans store fat in two sites – either below the skin and we call that subcutaneous fat. It looks like that subcutaneous fat is perfectly safe and can be relatively healthy.

But it’s when you store fat in the viscera – that’s in the liver, the pancreas, skeletal muscle and also in the fat cells inside the abdomen – that fat is totally different. What happens is, as that fat becomes more, the cells become bigger. They start to attract inflammatory cells and those inflammatory cells are active. If you have a large amount of fat, you are in a chronically inflamed state – and that’s what doctors don’t understand. They have no clue about that. Where Covid comes in, is it specifically attacks those visceral fat cells and releases a so-called cytokine storm from those fat cells. They start to release all these inflammatory chemicals, which then cause the fatal storm of inflammation that kills people in Covid-19.

So veganism – and Marika describes that beautifully – about how the Seventh Day Adventists came along in the 1930s and said that meat would cause cancer and make us sexual predators. In order to get rid of those bad events, humans had to stop eating meat. It was a religious statement. It had nothing to do with science. There never has been any science stating that plant based foods are healthier for us than meat. That’s simply not true

All the evidence is opposite – that without meat, humans don’t do very well. There is no traditional society that was ever purely vegetarian. Vegetarianism is purely a result of the industrial diet because, you can survive as a vegetarian eating highly processed diet, which will give you enough calories and and perhaps enough protein to get you by.

But it’s never been the ideal diet. And that is now being driven as part of this Covid great reset story, that firstly we are going to eliminate climate change and then we’re going to eliminate the animals and we’re going to eat a highly industrial diet, of processed meat – the so-called beyond meat. That is all part of what’s happening in the world today. It has no basis, in fact. You have to come to Africa to see that the malnutrition comes with removing animals from the diet. That’s what causes long-term malnutrition and stunting.

if you continue to eat your standard diet, that makes you angry – you can’t fast intermittently. you have to find the diet that’s going to take your hunger away. As soon as you increase the fat content, increase the protein content and reduce the carbohydrate content and eat real foods – not these highly processed foods – you’ll find that your hunger starts to disappear and you can then go for many hours without eating.

Most people who do intermittent fasting probably would eat in an eight hour period, either from lunch to dinner – that eight hour period they’ll leave open for eating – and then they don’t eat after dinner till lunch the next day. That’s a very convenient way. When I talk about intermittent fasting, I usually tell people eat once or twice a day. The idea that you must eat three times a day is nonsensical. We do much better when we eat more infrequently. For me, intermittent fasting is eating one large meal a day and perhaps having something else to eat another time during the day – perhaps eight hours later – and then fasting for the rest of the day.