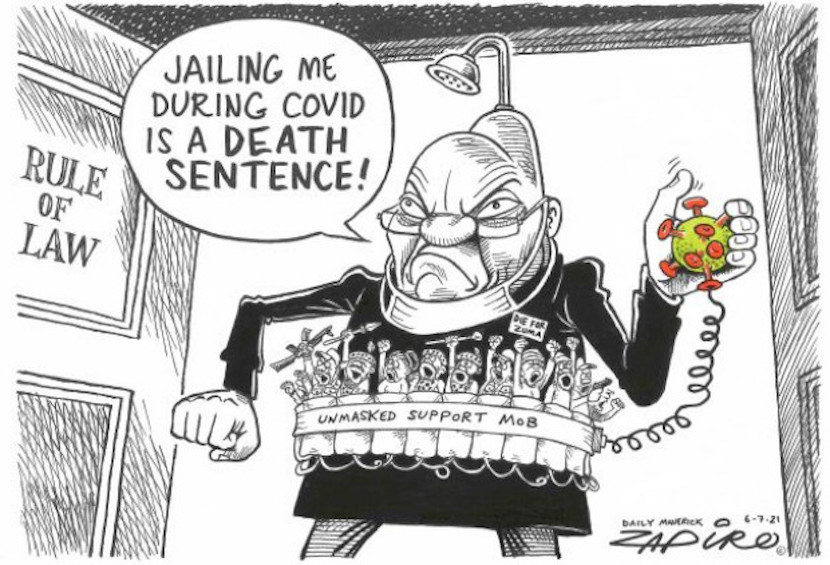 Across the country, thousands of South Africans cheered as former president Jacob Zuma handed himself over to police at the last minute. Facing a 15-month jail sentence for contempt of court, the 79-year old reported to an Estcourt prison to serve his time. While certainly a victory for South Africa’s legal system, the country has come under attack. Since last week, violent protesters and rioters have looted and destroyed large parts of the KwaZulu-Natal province, with Gauteng similarly affected. While his arrest and subsequent imprisonment may have been the pin that broke the proverbial camel’s back, there are myriad reasons behind the mass looting and violence currently gripping South Africa. As David Everatt notes below, SA’s gaping inequality, frustration of the hungry (and jobless) masses and even “internal ANC factional tensions spilling onto the streets” could be a few of many reasons behind the civil unrest. Everatt writes that “hungry people do not become violent looters on behalf of better-known looters who are in jail. They may well be available for mobilisation (looting, violence, marching) behind the organisers – but it is the organisers that need to be brought to book, and who must also face the rule of law.” As the Wits professor concludes, corruption (already a major problem in SA) thrives in a destabilised state with weak institutions. If SA were to go back there, there would be “no turning back,” he remarks. This article was first published on The Conversation. – Jarryd Neves

South Africans spent most of mid-July glued to their news outlets, from established media outlets to TikTok, from streaming news to old-fashioned printed words, to see just one thing: would Jacob Zuma blink? Would the country finally get some taste of revenge for the state capture, looting, destruction of institutions and threats to the country’s democracy their former president had enabled and championed? Would the rule of law win?

Zuma blinked, with a few minutes to spare, and handed himself over to police. An hour or so later he was booked into a rather comfy looking “state of the art correctional facility” in Estcourt (which had taken 17 years to refurbish).

The rule of law won. The institutions that had been so assiduously hollowed out under the nine years of his presidency had flexed their new-found muscle. The Constitutional Court had long held firm, the police were rather more wobbly, but despite much assegai-rattling by family members and the Zuma Foundation, into prison he went. No ANC leader expressed joy, only sorrow that the man had fallen so low; for people not in such elevated positions, it was a rare moment of jubilation in the midst of a global pandemic that has us locked down, again.

The stakes were (and remain) exceptionally high. Thanks in part to the commission of inquiry into state capture and corruption Zuma established and later refused to attend, Zuma is now known to have allowed the Gupta family, using organised crime money-laundering vehicles, to bankrupt the state. As has been noted, fish rot from the head. From the time that he was fired by former president Thabo Mbeki (in 2005) to date, Zuma has deployed his infamous Stalingrad legal strategy. In effect, he has been fighting every single item in court while adopting the victim stance of a man more sinned against than sinning.

Sadly, Zuma is not a Shakespearian hero, but a man of decidedly clay feet. For nine years as president, he outmanoeuvred pretty much all and sundry – he reshuffled cabinets to destabilise opponents; he forced the Whip and faced down multiple votes of no confidence; he allowed R50 billion to be stolen by his friends, the Gupta family – all now safely in Dubai – and ran state and party as both cash cow and defensive wall.

He met his match in Cyril Matamela Ramaphosa, who succeeded him as ANC and national president. Ramaphosa has moved with the cold, calculating methodology that proves him to be the real chess master (Zuma has a passion for the game). Ramaphosa has outmanoeuvred Zuma and many of his allies in the ANC (such as secretary general Ace Magashule). He has done this by trying to resuscitate the organs of state, investigation and prosecution that had been severely damaged by his predecessor.

The rule of law – which took a pummelling over the last decade – seems to be out of rehab. Zuma may only be in prison for a contempt charge – but the notion that the first ANC leader in orange overall would be Zuma was not a fantasy that played out as realistic in most imaginations.

Many reasons have been offered for the violence, looting, racist bile and bloodshed that erupted. These include:

All of these have some truth. Yet none provides a narrative thread that ties together these disparate issues and scattered but clearly organised acts of violence. Part of the gap in our understanding is how a middle-of-the-night incarceration of Zuma – albeit done in the blaze of TV arc lights – led to such a widespread and destructive but apparently spontaneous outbreak.

This narrative suits Zuma and his supporters perfectly: pity for the victimised former president unleashed patriotic fervour that was unstoppable, proving his popularity and victim status. Family, the Zuma Foundation and others all began pumping out the narrative – much as Zuma’s daughter tweeted the video of a gun firing bullets into a poster of Ramaphosa. Subtlety did not play much of a role.

But when the Minister of State Security reported on the morning of Tuesday 13 July that her spies had managed to stop attacks on substations, planned attacks on ANC offices and in Durban-Westville prison, things began to look different. How did they know of the plans, and for how long? Who was doing the planning? How did they stop it?

When “impeccable sources in the intelligence service and law enforcement” warned of arms caches at Zuma’s home, Nkandla; when we recall that the police admitted to “losing” some 20,000 weapons in the 2000s, as had the State Security Agency, we are permitted to ask uncomfortable questions.

Suddenly the acts look rather more organised and rather less spontaneous.

Neeshan Balton, executive director of the not-for-profit lobby group, the Kathrada Foundation, has suggested that part of the strategy was a wildfire – strike lots of matches and just let them burn whatever is in their path to destabilise the democratic project.

This too is premised on the existence of a plan.

The danger with suggesting that this was not at heart a set of random acts by poor people who were overcome by emotion at the thought of Zuma in prison but rather a (more or less well) planned and executed attempt to destabilise the state is that rather than “joining the dots” as Public Enterprises Minister Pravin Gordhan advised, one may be constructing a crazy conspiracy theory.

The definition of insurrection is to rise against the power of the state, generally using weaponry. Conspiracies exist. From dark warnings of another massacre like the one at Marikana in 2012 should Zuma be touched, to planning sabotage against municipal infrastructure, and fanning the flames of xenophobic violence, it seems very difficult to ignore the planned insurrection at hand.

Poor and hungry people exist, and the state should be ashamed. But hungry people do not become violent looters on behalf of better-known looters who are in jail. They may well be available for mobilisation (looting, violence, marching) behind the organisers – but it is the organisers that need to be brought to book, and who must also face the rule of law.

Corruption thrives in a destabilised state with weak institutions. South Africa cannot be allowed back to that space because there will be no turning back.