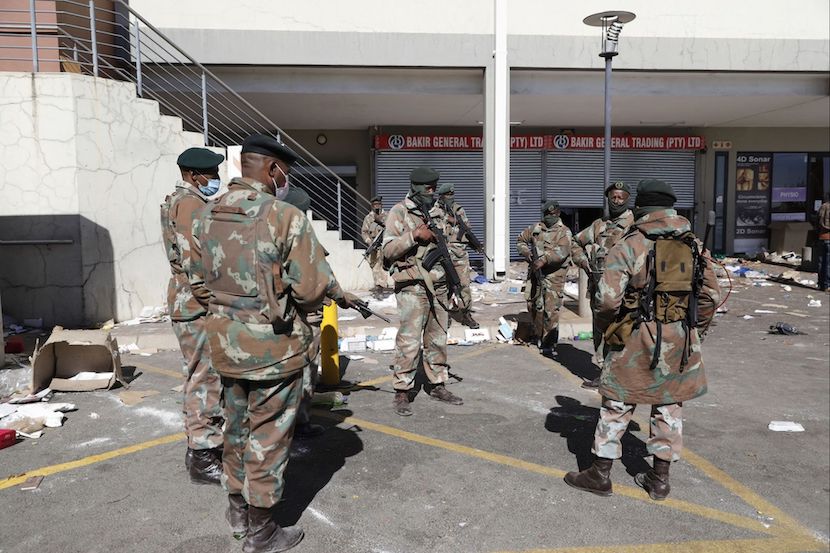 In the last few days, South Africa has seen violent protests and wide-spread looting in the KwaZulu-Natal and Gauteng provinces. Already in an economic crisis, businesses big and small have been destroyed – along with the jobs and livelihoods of even more. While many believe Jacob Zuma’s arrest is behind the mass protesting, many social commentators note that it may have been the spark that lit the fire, but the real reason behind this is hunger, inequality and a lack of jobs. As the outgoing CEO of the IRR Frans Cronje said in a recent interview with BizNews (listen below), “more than half of young people do not have a job. They wake up every morning, not sure of what the day is going to hold for them. They don’t have the dignity of labour and earning something. That’s a very powerful social force.” Below, the Free Market Foundation’s Chris Hattingh writes that with such a high unemployment rate amidst the youth (74.7%) “a sense of hopelessness and frustration permeates the country.” Below, Hattingh notes that this and other negative factors will continue to exist in South Africa until the country becomes investment-friendly. – Jarryd Neves

After more than a year of enterprise-killing lockdowns, and a decade of declining economic growth, South Africa has been gripped by violence and looting. Attempting to give a glimmer of hope, during two public addresses, and in his 12 July letter, President Ramaphosa said, “We are building up, not shutting down. We will rebuild our economy and create jobs.” But as South Africans have learned over the last while, mere words from the government can only take one so far. Years of ideological and policy decisions by this government, policies that discourage economic activity, business- and capital-formation, and job creation, have led the country into this present crisis.

President Ramaphosa also highlighted phenomena such as hunger, poverty, and inequality, as factors contributing to the current spate of looting. Yet he did not address any of the government policies that exacerbate, if not cause, these burning issues. Because of an anti-entrepreneurial and anti-wealth creation environment, many South Africans will feel that inequality is a static phenomenon, and that the only way to take care of themselves is to take what they can get from others, while they can.

Citizens are told that, if they do not have as much as someone else, it is always because that other person (or group) has illegitimately acquired what they have. Many in government, and in the commentariat generally, assume that wealth is fixed, and that it can only ever change hands through force. There is little to no acknowledgement of the fact that the government controls every facet of the economy (in some instances blatantly, in others subtly). This state of affairs has steadily manifested to where we are now, where it matters more who you know politically, and that government must ultimately decide how a fixed amount of wealth ought to be distributed amongst competing interest groups.

Busisiwe Mavuso, CEO of Business Leadership South Africa, has indicated that by the afternoon of 12 July more than 200 shopping malls had been looted, and retailers had lost an estimated R2 billion. Rebuilding businesses, and reinforcing and expanding supply chains, will take a long time. According to KwaZulu-Natal Premier Sihle Zikalala, as of 13 July, 26 people have died as a result of the ongoing violence. Gauteng Premier David Makhura confirmed that 19 people have been killed in that province. At this point, it is not a case of ‘lives vs livelihoods’ anymore; after a year of destructive lockdowns, the economy – and everyone’s economic wellbeing – is experiencing yet another battering.

In the latest Budget delivered by finance minister Tito Mboweni, cuts to areas from healthcare to education were announced. This was the inevitable, harsh outcome resulting from years of government pouring billions into state-owned companies (read: black-holes). Indigent citizens will feel these cuts the worst.

In the decade up to 2019, South Africa’s GDP growth averaged 1.4%. The credit rating is currently at junk level, and the government’s debt-to-GDP ratio is projected to breach 100% in the next few years – this would add further pressure on the private sector, and the government will become ever more desperate to control any and all possible sources of revenue.

To ever effectively arrest, and reverse the ongoing decline, the country needs real, transformative economic growth. Focusing on ‘the rich’ can only get you so far, as within the paradigm of redistributionism at some point there will be nothing left to redistribute. Transformative growth does not mean more government control and regulation. Rather, it entails:

The current devastation can be blamed on one individual. However, for as long as real economic growth and progress are prevented by government ideology and policies grounded in statism, the fertile ground for grievance politics (and the exploitation thereof by opportunistic forces) will continue to exist in South Africa. President Ramaphosa’s ideals of building up, of real job creation, will come to nought unless South Africa becomes investment-friendly.