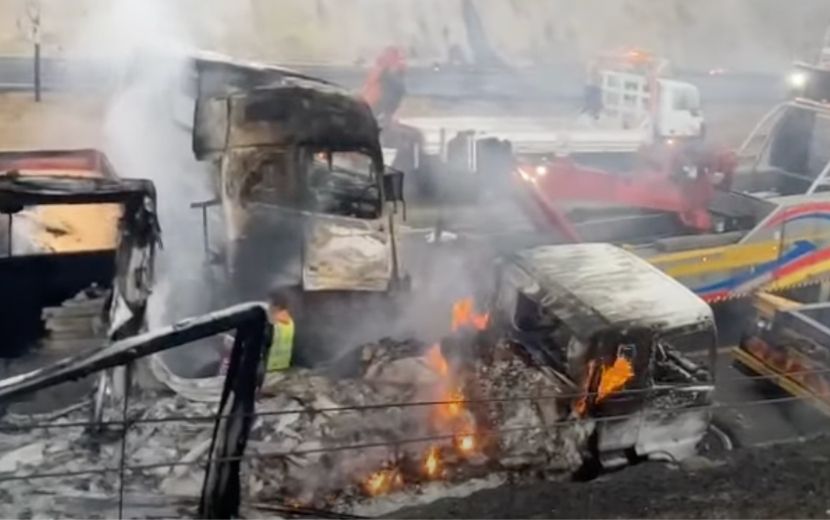 Civil unrest and looting sparked by the arrest of former president Jacob Zuma has seen Gauteng and KwaZulu-Natal bucking under pressure, as violent protesters damage property and steal from businesses. Late last week, trucks carrying cargo were burned to the ground, with Bloomberg reporting an estimated 35 trucks destroyed in the inferno. Below, Gavin Kelly, CEO of the Road Freight Association, highlights the seriousness of the sorely affected supply chain affecting long-haul distribution. He notes that the short-term damage has already cost the industry billions of rands, but the long-term effects are still to be recognised. Not only will there be loss of income for drivers and employees, but for the companies too. There’s the possibility of logistics companies shutting down, which would mean fewer trucks and transporters to carry out work. “The consumer will foot the bill for what has happened – through both indirect charges relating to the cost of logistics, the need to build reserves to repair damaged infrastructure and as goods become scarce.” – Jarryd Neves

Road carries 80% of South Africa’s goods. Simply put: when trucks stop, South Africa stops. The opportunistic mass looting occurring in KwaZulu-Natal and Gauteng and the wanton destruction of trucks and goods has spread to the wholesale and retail sectors and distribution centres in these two Provinces – and there is a real and imminent danger this will spread to other Provinces. What started out as sporadic incidents on one or two routes, has now spread to the total supply chain, affecting the transport legs (all forms, whether local or long-haul), as well as destinations and originations. With the total supply chain now being impacted, the economic effects are far reaching – but the collapse of the supply of all goods will be the immediate result.

Short-term losses already run into billions of rands; the long-term impact is yet to be fully realised:

The consumer will foot the bill for what has happened – through both indirect charges relating to the cost of logistics, the need to build reserves to repair damaged infrastructure and as goods become scarce. Supply and demand will dictate cost – and if supply cannot meet demand, demand will drive prices up.

The looting and destruction of retail points (from small businesses to large malls, from regional to national distribution centres and warehouses) will force closures, whilst damages are ascertained, repairs are done and stock levels are replenished. There will be shortages. Some companies have already noted they will not re-open and the direct job losses (in those companies) and the indirect job losses (from all their service providers) will be huge. The cycle of unemployment will continue to spiral upwards.

What cost are we looking at? The cost to operational assets (vehicles and infrastructure) is just the tip of the iceberg – and as reports come in, this will grow exponentially. We are already looking at billions of rands in the total logistics supply chain – without factoring in the damages to commercial retail space.

The costs to commercial retail and other related damage will be phenomenal – and the impact on the investors and owners of these facilities has not been factored in, as yet.

The cost to families and communities where jobs will be lost, will be crippling. Millions will be lost in salaries and wages – but more importantly millions of people will become destitute. The long term implications of this have not been factored in yet.

The damage to the South African economy will run into billions of rands, as business confidence drops, foreign investments plummet or are withdrawn, and those who use South Africa as a transit hub, turn away from us and move to other countries that are safer and more efficient.

A State of Emergency needs to be declared – immediately. The time has come for the gloves to be taken off.

Law and order needs to be restored and the perpetrators /instigators/ inciters of the violence and destruction of our economy must be harshly dealt with. The Minister of Police previously referred to such activity as economic sabotage. Then the government needs to treat it as such and deal with it in the appropriate manner.

The country’s infrastructure, people’s lives and livelihoods and the right for all citizens to live in a safe environment have all been trampled upon by those who wish to have their will imposed.

This must stop. NOW. Mr President – do what is necessary to protect the people of South Africa.

We need directed, focused, firm and resilient control by you to stop what is happening.