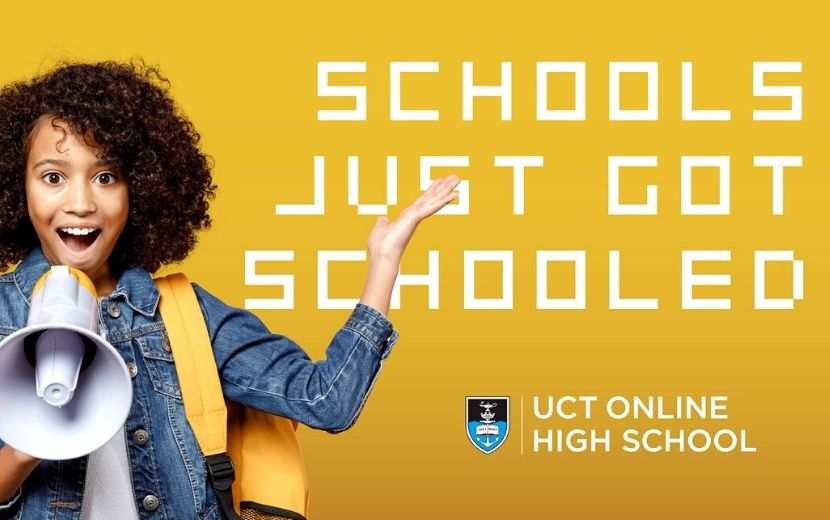 Covid-19 brought about radically new ways of doing things, particularly in the education sector. The lockdown regulations imposed in South Africa led to several schools having to resort to the implementation of online learning strategies to adhere to national regulations, which accelerated the digitalisation of education in the country. With thousands of students having adapted to (remote) online learning, new opportunities arose in the educational sphere. One of the most noteworthy new opportunities is the UCT Online High School which will be offered in partnership with Valenture Institute. Robert Paddock, the founder and CEO at Valenture Institute, spoke to BizNews founder Alec Hogg about this exciting new chapter – which is a first on the African continent – and the ways in which it addresses fundamental errors in the traditional brick and mortar school education. – Nadya Swart

Robert Paddock on the launch of UCT Online High School in partnership with the Valenture Institute:

This is not a world first. Universities like Stanford have their own online high school that’s been running for just over 10 years, but there’s relatively few globally. UCT is indeed the first university on the African continent to launch an online high school. It’s an incredibly exciting partnership between the University of Cape Town and the Valenture Institute. And really, one of the great opportunities is for an incredible institution such as UCT – being the number one ranked university on the African continent – to extend its expertise into the secondary schooling market, which I’m sure all listeners can appreciate; secondary schooling and tertiary sit side by side and they impact each other monumentally. The university has decided that it’s been long enough sitting on the sidelines and it’s time to get their hands dirty.

On the Online High School creating a transition into the university curriculum:

That’s certainly one of the intentions – to create a more effective bridge between the secondary and the tertiary schooling sector. I think it’s somewhat symptomatic of the way that our government departments are structured. But often, kind of, basic education believes that its job is to get students to complete a national senior certificate. Higher education believes that it’s their job to get people to a bachelor’s degree or postgraduate and so on. There’s this massive chasm that exists in between.

So there’s two ways in which the University of Cape Town are thinking about this together with us at Valenture institute. The first is that students will be writing the government national senior certificate examination. But we need to make sure that learners are very well prepared to succeed academically in the national senior certificate. And one of the mechanisms that we’re employing in this model is called mastery based learning. So learners actually can’t progress to the next portion of their module if they haven’t mastered the content that they’re busy working with, so that we can constantly build on solid foundations.

One of the problems with the traditional brick and mortar school education is that teachers always have to teach to the middle effectively. If Learner has mastered the concept or if they haven’t yet – if the schedule says it’s time to move on, everyone moves on. And the unfortunate reality in South African classrooms is that learners, on average; their grade level understanding spans about five grade levels in the average classroom, which is a terrifying prospect, especially for subjects like mathematics, science, STEM related fields. If you lose those fundamental concepts and you keep getting pushed through, it’s only a question of when you’re going to fall out of the system as opposed to if.

On fundamental flaws in the South African education system:

You can be sitting in grade nine mathematics and you can actually have a grade three mathematics level understanding, but you’re still sitting in that grade nine level class. Why? Because you’ve been pushed through every single year, because if learners stay back – it creates these massive clogs in the system. There’s this perverse incentive, let’s call it, to keep pushing learners on, regardless of whether they’ve actually mastered the concepts of the respective subjects or not. And that is particularly problematic when you get to, as an example, your final national senior certificate exams or even if you get through those and you manage to get into university.

Now, in first year university, one of the biggest issues in our country is [that] we’ve got massive dropout rates of previously disadvantaged learners in first year varsity, because they’re just not academically prepared and they’re certainly not prepared to succeed in this more independent modality of education being tertiary. So there are these huge systemic problems that if we don’t take a step back and think radically differently about the whole system – we’re just not going to solve it.

This is a systemic issue for sure. And it’s multifaceted as these complex issues tend to be. One other related point is that, as an example, in the Eastern Cape; 60% of teachers teaching grade eight mathematics cannot pass the same test for which they are teaching. Now, that’s a terrifying prospect. So now we’ve got this double whammy where not only are the teachers not sufficiently skilled in order to teach the subjects, but actually they have no positive incentive to keep progressing to make sure that students have actually mastered the concepts to achieve a reasonable grade level so that they can progress to the next.

That’s terrifying when you think about how that extrapolates and amplifies over time and the issues that it creates for us in the economy more broadly. So this idea of mastery based or competency based learning is not a new phenomenon. Certainly not at all. But it’s not being properly integrated into a school system, partly because the practical realities of a physical classroom make it very difficult to provide a personalised, individualised learning approach to every learner. And as you can imagine, let’s say that you’re already a strained teacher with forty kids in your class; the idea that you could actually pinpoint exactly that Sipho is struggling with quadratic equations, but another learner is struggling with something different and ‘ let me go and give some personalised attention to each one of those’ – it’s just not feasible not only to do the diagnostics, but actually then to do the personalised teaching – even if you have the skills.

Digital technologies, fundamentally and transformationally, create new opportunities to think differently about how we diagnose the gaps in student learning and how we then provide individual mediation. It’s a whole new world. I think one of the positives that have come from Covid-19 is that regulators and leaders of education institutions’ minds have been open to the fact that digital can play a really meaningful role. It needs to be thoughtfully integrated. It needs to be contextually suitable. But jeepers creepers, there is a huge opportunity for us to think differently. And quite frankly, we can’t keep doing what we’re doing. I think our results are a testament to that. Like we have to start thinking differently.

On how the partnership between UCT and Valenture Institute will work:

So the UCT Online High School is a collaborative partnership between the University of Cape Town and Valenture Institute. We have a shared government structure. So members of the University of Cape Town leadership team sit together with Valenture Institute leadership team on what’s called an oversight committee. Then there is a delegated authority to an Operations and Governance Committee, which includes representation, as an example, from UCT’s registrar, the Dean of the Centre for Higher Education Development. The UCT principal is a really key member there and two members from the Valenture Institute. So this is truly shared governance structure.

There’s then further delegated authority down to then the University of Cape Town Online High School principal. We’re excited, we will probably be in a position to announce that individual in about two weeks time. And then there’s further authority delegated down to the UCT Online High School leadership team. So it’s very much a kind of classic case of teamwork makes the dream work. And we’re trying to infuse the best of what the University of Cape Town can bring; deep academic expertise, a strong understanding of the challenges in the bridge between schooling and university and so on. And the best of what Valenture can bring, which is our proprietary learning management system and student support model.