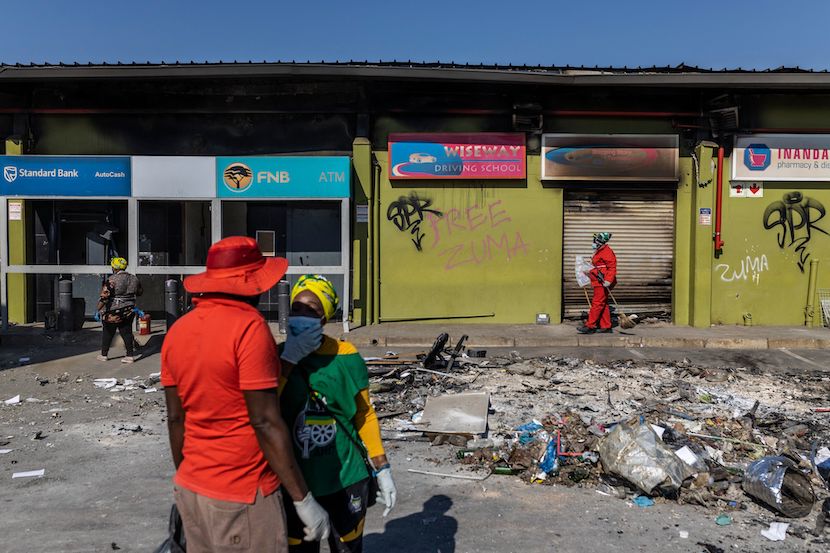 Calls for government to introduce a basic income grant have become louder following the recent spate of riots and looting that afflicted the Gauteng and KZN provinces. According to Riaan Salie of African Liberty, this has prompted President Cyril Ramaphosa to respond to the pleas, suggesting that the ANC is indeed considering it. With nearly half the population living below the poverty line, a basic income grant would drastically reduce poverty in South Africa – but as Ivo Vegter explains, it’s not as simple as that. – Jarryd Neves

The pros and cons of basic income

There is a widespread belief that a basic income grant of some variety can rapidly and significantly reduce poverty in South Africa. That is true, but it isn’t quite as simple as all that.

Earlier in the week, I wrote about magic money tree theory (known by socialists as modern monetary theory) upon which Duma Gqubule bases a large part of his argument that South Africa could eliminate poverty in three years by implementing a basic income grant and a job guarantee.

The public interest news agency GroundUp also recently published an article written by two activists at the Institute for Economic Justice (IEJ), a progressive (i.e. left-wing) economics think tank, which argues that a universal basic income grant is affordable, and proposes a whole slew of new taxes in order to prove that claim.

Gqubule leans heavily on the IEJ’s work to make his case.

The case for a UBI

In several developed countries, UBI proposals have been made to address a relatively small number of people living near or in poverty. A major motivating factor is the belief that technology will soon make many low-skilled jobs redundant and therefore lead to widespread unemployment. (In my view, automation will make some of today’s jobs redundant, just like computers displaced typing pools and floors full of clerks, but it will not lead to widespread unemployment).

South Africa, however, is in a different situation. Our country struggles with persistently high, and rising, unemployment. Much of this employment is structural, caused by a mismatch between the requirements of employers and the skills of the unemployed. 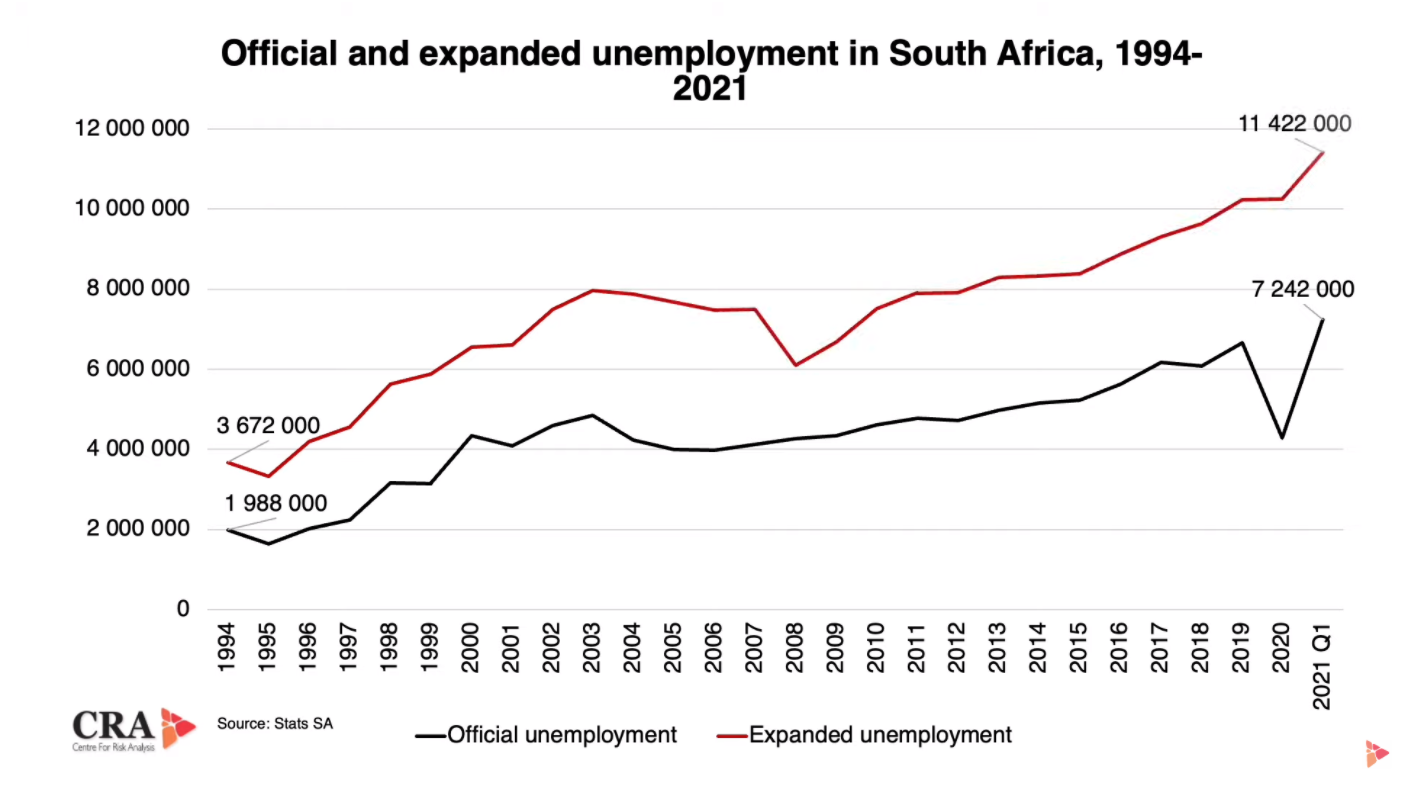 Soon after the advent of democracy, the ANC government introduced social grants as a primary social security policy. Grants were made available to old-age pensioners, the disabled, and people with long-term care needs, and to mothers of dependent children.

Research shows that these grants have had a significant effect on poverty reduction, especially in rural areas and among female-headed households.

It follows from these observations that providing a basic income grant to the unemployed (or indeed to everyone) would go further and alleviate much of the dire poverty that is attributable to high unemployment.

The basic idea of a UBI has a great deal of merit, and it is hardly new. More than 100 years ago, the socialist polymath Bertrand Russell wrote: ‘A certain small income, sufficient for necessities, should be secured for all, whether they work or not.’

It is in some ways similar to the negative income tax advocated by free-market Chicago School economists such as Milton Friedman, in which people below a certain income level would receive a percentage of the difference between their incomes and a certain income cutoff level as a grant from the government, while people above that cutoff level would pay the taxes to fund it.

The reasoning is that this turns over many basic services to the market and allows people the freedom of choice to spend their money on the schools, healthcare, and other services that they prefer.

By contrast with an uncaring civil service monopoly, which has no skin in the game and no incentive to provide a good service, cash grants for the poor would force social service providers to compete for customers, which will improve the quality and reduce the price of these services.

There is exactly zero chance that a UBI in South Africa would replace other welfare services, so the objections to such a scheme – such as that deadbeat parents might spend their kids’ school money on alcohol – are moot.

Proponents of a UBI argue that it would reduce poverty levels, and by freeing people from the anxiety of daily survival, would improve not only their quality of life, but also their outlook in the job market.

Detractors believe that it would incentivise idleness. In particular, it would disincentivise work in tough jobs that earn little, like refuse collection or construction. It would also disincentivise entrepreneurship, which often is extraordinarily hard on new start-ups that have yet to build enough revenue to pay a decent wage to the founder(s).

The higher the level of the UBI, the more the disincentive would bite, which would leave an ever-shrinking pool of productive taxpayers to carry an ever-growing pool of people who cannot, or will not, work.

The problem is that there is precious little evidence either for or against a UBI. A number of small-scale experiments have been run, both on negative income tax and on UBI, but they’ve been limited in scope, and the results – beyond obvious findings about improved well-being – have been largely inconclusive on matters such as market impact or unemployment rates.

Finland decided not to extend its experiment with a UBI, and eventually discontinued it, because it found that giving money to the unemployed was unpopular with the employed majority.

Canada tested an income grant which was conditional and not fully universal but canned it over its cost. A UBI really ought to be tested as a universal basic income, and not just a basic income provided to a handful of selected research subjects.

Switzerland, one of the wealthiest countries in the world, needed citizens to vote their approval for a UBI pilot, but 77% voted against it.

What would it cost?

Some of this, but only about 5%, would be recouped via income taxes, and some more through VAT, assuming that most of the grant would be spent in the economy.

Gqubule recommends introducing it at the FPL, and then ramping it up over three years to the UBPL. So, he’s talking about a cost of R415 billion three years down the line. This figure could be reduced by 5% and R50 billion by income taxes and VAT, respectively, to get a net cost of R344 billion. Per year, increasing to account for CPI every year.

It would dramatically increase the current budget deficit, estimated at R690 billion, to over R1 trillion. That, in turn, would be funded by debt, which would certainly push our national debt past the 100% of GDP mark.

Gqubule says none of that matters, because of magic money tree theory, but as we’ve established, that is a fantasy. Whether it is through taxation, or inflation, one way or another, we’re going to have to pay for all this largesse.

Only then, it argues, will a UBI be affordable.

In short, the IEJ proposes to make South Africa way more unfriendly to business owners, foreign investment, and private wealth creation than it already is. Presumably, it has never heard of the Laffer Curve.

So, the top arguments against a UBI have not really been addressed. The first is that it will simply be too expensive. For a country in a deep economic malaise to even consider such an expensive social security programme is, well, preposterous.

The successful welfare states in the developed world did not start out as ‘social democracies’. They made their wealth on the back of free markets, industrious people, and free trade. Only once they became rich could they afford to implement substantial social safety nets, and even then, they came at significant economic costs.

The second issue is that incentives work, but handouts are disincentives to work. If people don’t have to work, a lot of people are going to take up that offer and stop trying to be productive citizens that raise the overall economic performance of the country.

The third is that there are no plausible political avenues to having a UBI replace existing welfare and social services programmes. If it could, it would arguably be an improvement, but it can’t, and it won’t.

A fourth problem is that the UBI would have to be administered. The government already struggles endlessly to distribute existing grants. There are frequent delays, grants are never paid until well after the end of the month, and fraud is rife.

The idea that there is a civil service bureaucracy, or even a contracted private agency, that could distribute a UBI efficiently, timeously, and with a reasonable level of security, is laughable. It will just become a bigger trough for the corrupt to feed at.

There is a further argument against a UBI in South Africa, which is that it essentially puts lipstick on a pig.

As IRR CEO Frans Cronjé points out, it would allow the ANC government to congratulate itself on a job well done, without the pressure of having to enact any of the underlying economic reforms that are urgently needed to re-establish a thriving, growing economy.

Enacting a UBI will certainly buy the ANC votes in the next election, but that is all it is: a voter bribe. It puts a plaster on the symptoms but does not address any of the underlying problems that cause the country’s high unemployment and poverty levels.

Gqubule also proposes a jobs guarantee, which would entail government subsidising or fully funding jobs for everyone who wants one. This idea has so many holes, it’s hard to know where to start.

Like with a UBI, this idea is affordable only if you believe in magic money tree theory.

If everyone is guaranteed a job, then how would you dismiss people for under-performance? We’re already overrun by lazy, unfit, and disinterested civil servants. Why would anyone bother to put in an honest day’s work if their jobs are guaranteed?

If everyone is guaranteed a job, what would they all do that is economically productive? Or are we going to continue to conceal the true extent of unemployment with an army of flag-wavers?

They’re both wrong. The money that goes to paying the unproductive should instead be invested in the productive economy, where it can create far more jobs and wealth than any make-work programme ever could.

Like with a UBI, job guarantees also raise the question of who will administer this programme. Our incompetent and over-stretched government, which couldn’t manage its way out of a paper bag?

More philosophically, what happens to freedom in a country where a very large percentage of the population is directly dependent on the benevolence of the state for their basic survival?

Proposals such as job guarantees and a UBI will return us to a sort of paternalistic dependency, in which pleasing politicians, rather than working hard, becomes the key to material welfare.

I haven’t been able to discover who made this parody of Barack Obama as the Wizard of Id, but it teaches an enormously important lesson: 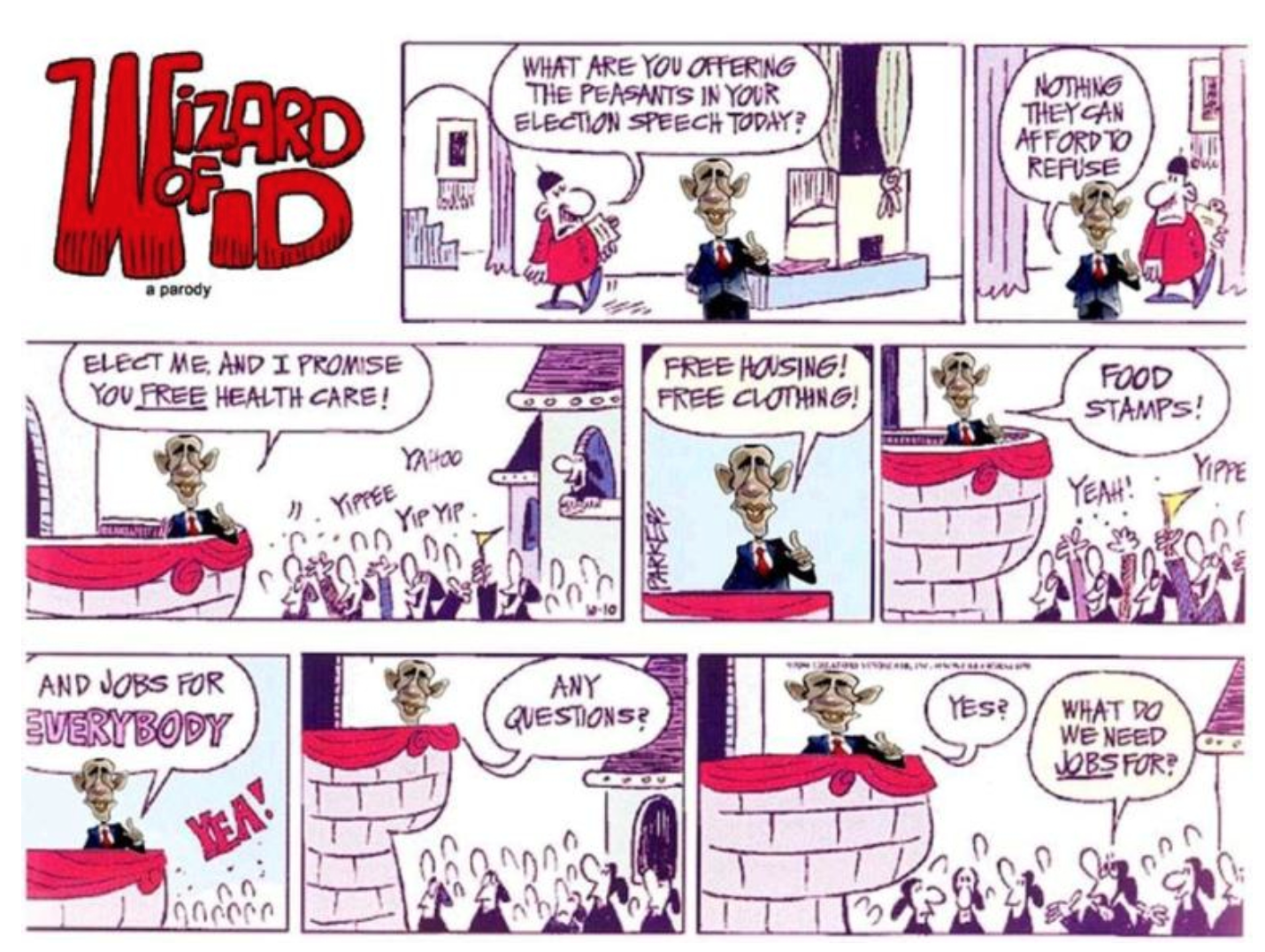