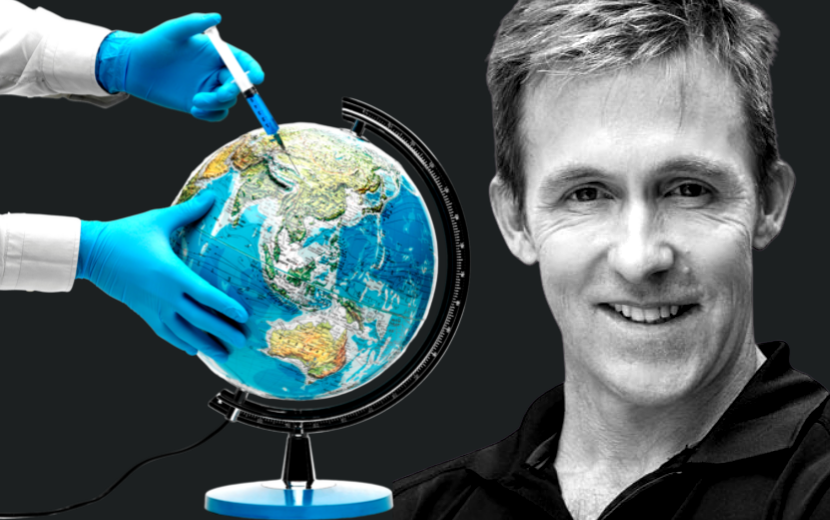 Subsequent to Discovery CEO Adrian Gore’s announcement earlier this month that all its SA-based employees would be subject to a vaccination mandate as from 2022, the subject of mandatory or enforced vaccination has been very uncomfortably propelled into the spotlight. Dr Duncan Carmichael, founder of The Institute of Healthy Ageing (IHASA) and author of the medical book ‘Younger for Longer’, wrote a refreshingly rational article which looked into both the arguments for and against enforced vaccination. BizNews interviewed Dr Carmichael to further explore the findings of those studies referred to in his article, the particularly topical debate between natural immunity and Covid-19 vaccine-induced immunity and the erosion of the public’s trust that occurs in the event of enforced vaccination. – Nadya Swart

Dr Duncan Carmichael on his profession and experience with the issue of enforced vaccination arguments:

On the findings of the recently released Israeli study:

So essentially the Israeli study – which still is in a journal called MedRxiv, which is like a holding pattern journal. It still needs to be peer-reviewed, but they generally only publish them in MedRxiv if it’s like one of interest and secondly, likely to get through the review process. So it still needs to be fact-checked.

But essentially in there, they were showing that in Israel – where they’ve had the vaccine rollout for quite a long time – that interestingly, six months down the line, what they’re finding is, which is what we’d expect as well, that the vaccine strength is not perhaps quite as strong as we had hoped. And people are starting to have to now go into hospital having had a vaccine six months ago with slightly more symptoms than we’re expecting.

People look at UK numbers; people are delighted that if you’ve had a vaccine, you’re tending not to need to go into hospital. But as things progressed down the road, perhaps that new support that the vaccine was giving was not quite as good. And so they’re having to go to hospital more.

And it really is just as we had with past vaccines, that [with] the natural or wild-type immunity from an infection – one would expect it to be stronger, one would expect it to affect more aspects of our immune system than just a piece of RNA making a piece of protein, which is what a vaccine is. And so, to have a longer immunity than, say, the vaccine. So that’s what that study is about.

On the picture in Israel as it relates to the robustness of natural immunity from prior Covid-19 infection:

The picture from Israel is really just cautioning us that the vaccine is not a panacea. It’s not the big thing. It’s not the answer. It’s part of a solution. It’s certainly very useful; it’s decreased hospitalisations, it’s decreasing illness, it’s decreasing death – but it has its limits. We should be in a healthy state when we have the vaccine. We shouldn’t be exhausted and have coughs and colds and things. We need to continue to look after our health after a vaccine. We can’t just rely on it and then sort of go and rush off.

So, we have – and I think it’s what we’ve seen with past vaccines – that the natural wild-type immunity, one would expect it to be stronger than the vaccine immunity. And that is what this is Israeli study is showing. It’s nothing massively new, but it’s just affirming what we know from past vaccine experience.

On whether he would advise his patients who have natural immunity by virtue of prior Covid-19 infection to get vaccinated:

Well, yes, it depends. And so I’m dividing people up into the over 50 year olds – that’s my group – and the under 50 year olds. And [with] the over 50 year olds, the best thing to do is not get the natural wild-type infection, but to get the vaccine – because we’re more likely to get a nasty infection. We are more likely to fill up the hospital beds. Once you’ve had the vaccine, if you were to happen to get the infection – and you would probably then get a mild infection – big bonus, because that’s going to then see us through not for six to nine months, but for two or three [years], who knows, but for a much longer period of time.

It doesn’t mean that we should sort of rush out and hug people who’ve got the virus just because you have the vaccine. But it is not a terrible thing if we were to be exposed to the virus a month or more after having the vaccine and we were to develop that immunity, in my opinion.

On precautions to be taken subsequent to getting vaccinated:

On the findings of the Wisconsin study:

So, in the Wisconsin study – in my reading of it, and we will see further examinations of it as it goes along – but I think the background is that a lot of people who’ve had their vaccine have been looking at people who haven’t been vaccinated, and they’ve said, ‘Well, you’re the problem. You’re the people who are spreading this illness around.’

And really what the Wisconsin study is saying is that as a vaccinated person, if I pick up the virus, I can still have a high viral load. I can still pass it on. And we still need to know a lot more about it. Now, other studies have said that you’ll have a viral load, but it might be less than someone who has not had the vaccine. But in certain circumstances, you could have quite a high viral load.

There is the possibility that I could, having had the vaccine; pick up the virus, not have many symptoms, have a reasonably high viral load – in theory – and not know that I’m passing it on. So as a vaccinated person – and I’ve seen this with quite a few patients – I need to be mindful that if I’ve got a bit of a scratchy throat – it could be Covid and I should really go for a test.

On whether Covid-19 with a recovery rate of over 99% is a ‘special circumstance’ which warrants forcing individuals to forgo their right not to get vaccinated:

It’s interesting, isn’t it? This is such an important topic. I honestly don’t think I’m the most qualified person to make the judgment on this. I’ll certainly give my opinion on it. But they’re far cleverer people than me who would have a wider opinion on it. But I do think we need to be mindful that It’s very difficult for us to swallow the fact that ‘I do not have the right to do whatever I want with my life.’

And then we think about it. Yes, you can’t shoot someone, you can’t run down the street naked, etc. There are certain things that we can’t do, but when it comes to medical things – it becomes a lot more personal. And there have been many, many instances in the past where people have been coerced and forced and governments and then – after the Second World War with the Nuremberg Code and then the Helsinki Declaration some years later – that the medical rights, what we put inside our body, should be a whole lot more enshrined.

It’s not law. It’s not legislation that we can’t. But a lot of countries uphold that. And it’s upheld because, as a clinician, we work on trust. When someone comes in to see me, he or she trusts that what I’m going to say is for their best interest. And as soon as we start coercing and forcing, then we lose some of that trust. And it’s not just that you’ve got to buckle up, [that] you’re not allowed to drink alcohol – there’s a lot more at stake than that. And it’s a very difficult question, you know, ‘the good of the herd.’

Adrian Gore was saying in his article why Discovery is enforcing [vaccination upon] their employees that we have had so many hospitalisations that we have a responsibility to have a vaccine – because it’s proving to be quite useful – so we can reduce the burden on this state, you can reduce those hospitalisations. But from a clinician’s point of view, it’s so much more complicated than that – because we do lose a lot of trust when we pull that trigger.

On the repercussions of the erosion of the public’s trust in the medical fraternity in the event of enforced vaccination:

We’ve seen it. I mean, I see it every day. Everyone, people hear what they hear, they’re in that bubble, whether it’s this side or that side. And, you know, one of the nice things about BizNews is that you allow discussion from both sides and you encourage it – and we need that more and more. You know, [in] South Africa, we’ve had the Truth and Reconciliation Commission. We have a long history of open discussion, of being able to give an opinion.

I think it’s so important. And that’s what we lose. We lose the discussion and we lose people feeling free to express their fears. It doesn’t matter how ridiculous the fear is. That’s why psychologists help us to be so at ease, so we can express our fears, they can actually come out. It’s very important. As soon as we start suppressing things and enforcing things – all of that goes underground.

On his stance in respect of enforced vaccination:

I do have a stance, I mean I’m against enforced vaccination. There’s got to be a pretty good reason. And I don’t think you have the reasons at that moment. I don’t think they’re in place, and I think that’s what – especially – the middle part of the article and the studies that have come out show; that as a vaccinated person, I can still shed viruses, my vaccine that I get is not long lasting. There’s really quite strong limits on it. We’re not going to get herd immunity. So, the strongest argument for enforced vaccination is to take pressure off the state, pressure off hospitals – and I think that’s a very hard sell.