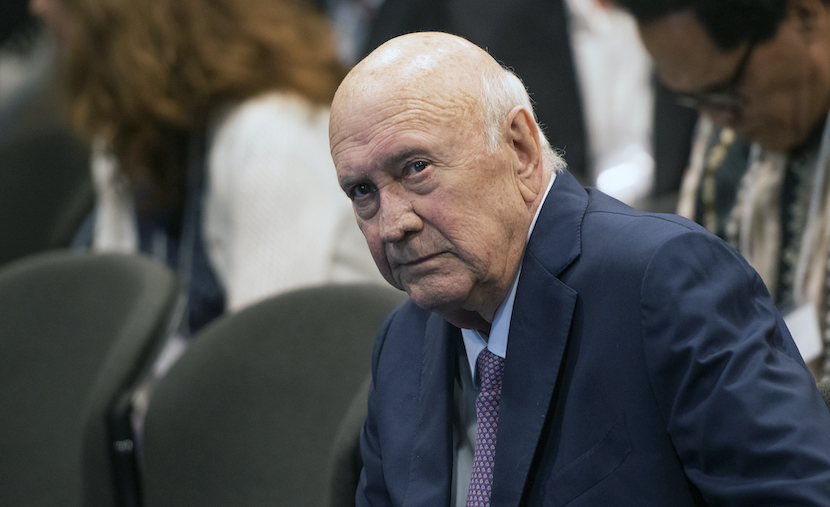 There’s one line in this news obituary that stands out from many competing claims: “South Africa could not have escaped from the cruel vortex of its history without him.” Pragmatic, back to the wall, smart politician, cynical negotiator, hero, villain… FW de Klerk was at various times all of these. The one jarring note for me in his otherwise credible and sympathy-inducing final video was him saying that, since the early ‘80s, his views “changed completely” – as if he’d had a ‘conversion’ upon realising that apartheid was wrong and unjustifiable. If such it was, it happened on a continuum. A canny politician to the end, De Klerk carefully avoided citing any Damascene moment. What I and many journalists of the time saw was a carefully managed transition to full majority rule, with some plausibly deniable dirty tricks used to keep the upper hand at the negotiating table. The journey to a full apology for apartheid’s intrinsic evil was far longer than the one from a tricameral parliament to democracy. Perhaps it’s more accurate to say the cruel vortex of history would have been worse without him. Story courtesy of the Financial Times. – Chris Bateman

FW de Klerk, the last South African president of the apartheid era, presided over one of the most extraordinary political events of the late 20th century: the voluntary handover of power by the white minority regime in conditions of remarkable peace.

De Klerk, who died at home in Cape Town at the age of 85, shared the 1993 Nobel Peace Prize with Nelson Mandela, the country’s first democratic president, for dismantling apartheid.

But, decades on from that peaceful transition, South Africans still have cause to reflect on Mandela’s description of de Klerk, even in the midst of the peace negotiations. In his 1999 memoirs, de Klerk said Mandela called him the head of an “illegitimate discredited minority regime”. Others regarded him as reluctant to acknowledge the depth of apartheid’s crimes to the end.

“While de Klerk played a vital role in ending apartheid, he was never able to acknowledge the full extent of apartheid’s evil,” the foundation representing the legacy of Archbishop Desmond Tutu said on Thursday.

With more boldness and imagination than any previous Afrikaner leader, de Klerk transformed the political landscape of South Africa when, in 1990, he released Mandela from decades in prison and legalised the African National Congress, which took power four years later.

De Klerk had the courage and vision to do what no other white politician could even contemplate: not only to admit that apartheid, South Africa’s grotesque experiment in social engineering, had not worked, but to follow this perception through to its logical conclusion — that black majority rule was inevitable and that whites would do best to accept it while they still had the power to press for a reasonable bargain.

De Klerk often said that he acted when he did to avoid the threat of the kind of racial war that engulfed Rhodesia before it became Zimbabwe.

Though a devoutly religious man — de Klerk was a “Dopper”, a member of the Gereformeerde Kerk, theologically the most conservative of South Africa’s Dutch Reformed churches — his decision to abolish apartheid appears to have been more pragmatic than moral.

He acknowledged the futility of trying to keep South Africa under white control in the face of massive migration of black jobseekers to the cities from the scattered, impoverished “homelands” that had been decreed by apartheid. But he was a slow convert to the cause of reform.

His father Jan was a senator and cabinet member under prime minister Hendrik Verwoerd, apartheid’s main architect. His grandfather was another senior NP politician and friend of Paul Kruger, the elder statesman of Afrikanerdom. De Klerk himself held various cabinet posts from 1978 until becoming president in the last white government, elected in 1989.

De Klerk’s brother, the political commentator Wimpie de Klerk, insisted that FW (as he was universally known) cultivated a conservative image to ensure a strong power base within the party. In his book FW de Klerk: The Man in his Time, Wimpie explained: “In Afrikaner politics, power is based on conservative thinking; in the long run it gains you confidence, and once you have that you can do magical things with the Afrikaner. That was FW’s strategy.”

Nonetheless, de Klerk found his fellow Afrikaners deeply sceptical of political reform where they were not openly hostile. He was branded a traitor by many Afrikaners and was subjected to countless death threats from rightwing extremists.

As political negotiations seemed to drag on interminably, with mounting violence, he became a hate figure for those in the white minority who feared or opposed change — and also for many supporters of the ANC, who accused him of turning a blind eye to the abuses of security forces.

Though he continued to fight for an effective white veto in a post-apartheid government, his bottom line was steadily eroded until he agreed to what was in essence a majority rule constitution.

From 1994 to 1996 he served as one of two deputy presidents under Mandela. De Klerk stepped down as leader of his party the following year. His private life brought controversy when he divorced his wife of 39 years, Marike Willemse, and married Elita Georgiades. His first wife, with whom he had a daughter and two sons, was murdered in her Cape Town home in 2001.

While founding the pro-peace FW de Klerk Foundation as well as a Global Leadership Foundation that groups former heads of state and government worldwide, he became largely detached from South African public life. In 2004 he quit the renamed New National party after it announced that it would merge with the ruling ANC.

Yet he often drew outrage, telling a CNN interviewer in 2012 that he had apologised only for apartheid’s injustices, not for having promoted the concept of “separate but equal”, racially based nation states in South Africa.

“The Czechs have it and the Slovaks have it,” he went on, seemingly blind to the absurdity of comparing eastern Europe’s velvet divorce with the iniquities inherent in a system that was never intended to cede big cities, good land or significant mineral wealth.

In 2020 de Klerk denied that apartheid was a crime against humanity, echoing words of defiance at South Africa’s Truth and Reconciliation Commission decades earlier. He eventually backtracked and said that it was “not the time to quibble about the degrees of unacceptability of apartheid”. In a video message by de Klerk released after his death, he apologised for “the pain and the hurt and the indignity and the damage that apartheid has done” to non-white South Africans.

Mandela once said that he and de Klerk “had our differences, some of them very public. Our basic respect for one another has, however, never diminished”.

De Klerk could be petty and, as president, he became almost paranoid about criticism. More seriously, he can be faulted for his reluctance to clear the security forces of obstructive officers and slackness in pursuing the official perpetrators of violence.

His hopes of maintaining Afrikaner influence in a post-apartheid society may have been largely futile. But South Africa could not have escaped from the cruel vortex of its history without him.

© 2021 The Financial Times Ltd. All rights reserved. Please do not copy and paste FT articles and redistribute by email or post to the web.