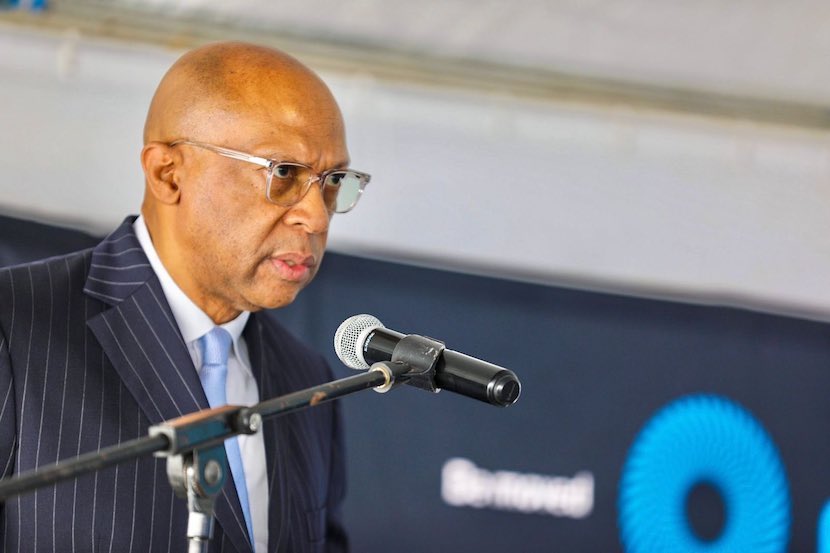 In an interview with BizNews founder Alec Hogg, Paul Hoffman of Accountability Now takes a lawyer’s look at the clear attempt to throw the kitchen sink at Matthews after he started uncovering malfeasance. According to Hoffman, using Matthews’s dual-citizenship as the reason for his suspension is dubious, questioning the true motive of Leonard Ramatlakane, the politician drafted in as Prasa’s chairman. – Sharidyn Rogers

NB: Prasa reports to the Transport Minister, not the SOE Minister as suggested in the interview.

It’s difficult to come to a conclusion because there is so much up in the air and so many stories on the street. What we know for sure is that Leonard Ramatlakane  – who has drifted into the position of chair of Prasa, having been a politician all his life and a member of Parliament at various stages  – in his capacity as chair, putting up two reasons for the garden leave that Matthews is enjoying. The first is the question of the non-disclosure of his dual citizenship, part Brit, part South African. Apparently, when he was employed back in February, Matthews just wrote ‘SA citizen’ and did not mention his British citizenship.

Why that should be material defeats all logic because this man happened to live in the UK because his father was an exile. His sister is a cabinet member in South Africa, so if he is a security risk, let’s hope the rest of the family isn’t. There seems to be absolutely no materiality to the non-disclosure of his British citizenship, which makes you think that they are trying to throw the kitchen sink at him and will resort to any manoeuvre to keep him on garden leave long enough to get bored and want to just move on with his career, rather than stay.

The question is, why do they want to get rid of him and rather mysteriously? Ramatlakane talks about contractual obligations giving rise to the suspension, and he doesn’t say what they are. There is a lot of speculation going on around what that is all about. It’s also known that some of the whistleblowers at Prasa, which led to the Zondo Commission, have not been treated well by Prasa and they are not back in their jobs as they had hoped to be.

This may have something to do with the suspension of Matthews. The other story on the street is that Matthews has been setting aside procurements that do not comply with the Constitution, aren’t fair, equitable, cost-effective, transparent nor competitive. That is upsetting the board of Prasa because he is not playing ball with the Cadre deployment in Prasa and not allowing the state capture party to continue in Prasa. I wonder why a man with a master’s degree in public administration from Harvard should allow himself to get involved in a mess of this nature.

On the distinction between freight rail and Prasa:

The Passenger Rail Association of South Africa has really succeeded the Metro rail. It’s all part of the family that used to be the South African Railways and Harbours, and that was split and separated out. Now we have the Ports Authority and we have Transnet. Prasa has been kept separate from the freight rail. Freight rail is Transnet, Prasa is passenger rail.

On Pravin Gordhan’s jurisdiction over Prasa:

[Pravin Gordhan] is the shareholders’ representative. He is the minister in charge of public enterprises and the board should be reporting to him about what is going on there. Just relying on Ramatlakane’s press statement as recorded in the business day, for example, it’s a question of the materiality of his citizenship. The man has been there since February for heaven’s sake, and now suddenly he is a security risk … I don’t think so. Then this contractual obligation, part of it is mysterious and ambiguous and very difficult to unravel. So, time will tell.

On whether Ramatlakane would have been appointed by Pravin Gordhan:

Yes, that’s correct. This is part of the attempt to clean up the act of the state-owned enterprises that have been sites of state capture. But when you think about it,  it’s deployed cadres all around and it depends on which faction the cadres belong to, as to whether things are going to work as they should, or whether they are going to be a continuation of state capture.

He got an undergraduate degree from Warwick University, which obviously happened while his father was in exile. Then he has a postgraduate master’s in public administration from Harvard, according to what mother Google told me about him.

It’s payback time. If we assume he is as pure as the driven snow, then he was actuated by the best of motives in seeking to be part of the solution rather than part of the problem. But if he is a typical deployed cadre, then he’s sought deployment there, so that he can have his turn at the dining car on this particular trailer.

On Ramatlakane as the man entrusted to turn around the embattled rail utility:

I’m sure the matter needs to rapidly be driven to a head, and that can be done by seeking clarity from Ramatlakane; as to what he was talking about when he spoke so mysteriously about contractual obligations. I’m sure that in the interests of openness, accountability and responsiveness – which are all set up very deeply in section one of the Constitution – informing as foundational values, the way this country is meant to be run. Pravin Gordhan will be doing just that and saying, “Okay, please, Mr Ramatlakane, can you explain to us what exactly is going on here?”

Matthews had never crossed my radar before this incident, which would seem to suggest that he has not previously been involved in shenanigans of state capture. If there is conflict between him and the board, then the underlying cause is that he is seeking to achieve objectives in a particular way; and they are seeking to achieve objectives in a way that is inconsistent with the way that he is going about it. Who is right and who is wrong? Well, Peter Harris is an old campaigner and is unlikely to go on record to the media saying that his client has no case to answer.

If that is not the position, he would be much more likely to be very reserved and unforthcoming in relation to queries like yours if he was concerned that his client is in trouble. I cannot see any trouble at all in relation to the materiality of the non-disclosure of the British citizenship, especially as it’s raised in November, and he was employed in February. So it obviously has something to do with this mysterious contractual obligations part of the story.