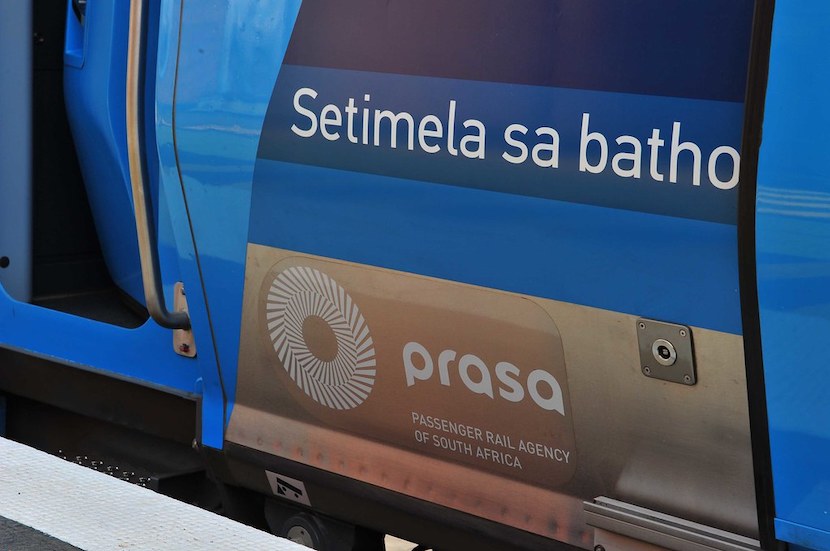 Just a week after the Government decided to place South African Airways under administration, another state-owned enterprise, the Passenger Rail Agency of South Africa is following in its footsteps. The Minister of Transport, Fikile Mbalula has announced that in view of ‘deep-rooted fault lines at Prasa’ that he is dissolving the interim board with immediate effect, the secondment of the acting group CEO, Dr Nkosinathi Sishi is withdrawn immediately as well and that Bongisizwe Mpondo has been appointed as the administrator. Mphondo is described in a profile on social media as a social entrepreneur who has ‘extensive experience in the fields of transportation planning’. President Cyril Ramaphosa said in his weekly statement that placing state utilities under administration was not his preferred option but he was determined to make tough decisions on the SOEs. Prasa is another prime example of a shell of a state utility ruined by the looting in the years under Jacob Zuma and his friends, the Guptas. In a letter to the Zondo Commission the controversial former Prasa head, Lucky Montana said its  financial mess was ‘directly linked to a major battle for control of Prasa’s rolling stock fleet renewal programme to the tune of R53bn.’ – Linda van Tilburg

Media statement of the Minister of Transport, Fikile Mbalula

This morning I addressed the management and employees of PRASA across all its divisions and subsidiaries.

PRASA is an important institution that plays a major role in South Africa’s public transport value chain and its impact on the economy cannot be emphasized enough. Each one of the 16 350 employees employed by PRASA has an important job to do, in ensuring that the wheels continue to turn and those who rely on our trains for their livelihoods are not short-changed.

I have no doubt that PRASA is well endowed with men and women who are not only committed to do their best to make sure PRASA succeeds, but who also possess the requisite talent to ensure that we transform the travel experience of our people.

During our first 100 days in office, we spent a lot of time tackling pressing challenges that constrain service delivery. These efforts revealed the fault lines in the Transport agenda and enabled us to re-imagine the role of transport in propelling economic activity, while taking strides in advancing social emancipation. It is precisely these fault lines that prompted us to establish the PRASA War Room, which has helped us gain a better appreciation of the magnitude of challenges facing this entity.

The continued decline of the quality of service PRASA provides to the commuting public requires urgency in the interventions we put in place. The focus of the 6th administration is on accelerated implementation, working with all South Africans. Our interventions here at PRASA are premised on this.

The urgency of addressing PRASA’s turn-around cannot be overemphasized, and tangible results that people can see must be realized in the shortest possible time.

In the decade of its existence, PRASA has experienced many challenges that became pronounced in the 2015/16 financial year. While the audit outcome was unqualified with emphasis of matter, the AG flagged serious governance breaches, particularly in the supply chain management. Irregular expenditure stood at R4.1bn alongside fruitless and wasteful expenditure of R541 million. This period was also characterized by dissonance at the highest levels of the organisation, characterised by tensions between the Board and management.

The Public Protector also released her report on PRASA titled “Derailed”, which highlighted serious lapses of corporate governance. As a consequence, the National Treasury instituted a forensic investigation on some of the issues flagged by the Public Protector.

The Directorate of Priority Crime Investigation (“the Hawks”) had also initiated investigations on a number of issues referred by PRASA.

The downward spiral continued in 2016/17 where PRASA had 2 Boards in a single financial year. The relationship between Minister Peters and the Board reached an all-time low, resulting in the Minister dismissing the Board, replacing it with an Interim Board in March 2017, which was short-lived. Over this period PRASA lost 1,355 employees, 26.4% due to natural attrition and 16% resigned. This was the first time PRASA received a qualified audit opinion.

Irregular expenditure stood at R19.6bn, an increase from R14.8bn in 2015/16. The AG reflected that instability in the entity, “including the board of control, negatively contributed to the decline in the financial management, performance reporting and compliance processes and the overall collapse of the internal controls within the public entity as a result of inadequate and ineffective oversight.” Fruitless and Wasteful expenditure escalated to R181m.

In 2017/18, PRASA had 4 Boards in a single financial year. This perpetuated the instability. Over this period PRASA lost 1,246 employees, 27% due to natural attrition and 18% resigned. Once again, the audit outcome was a qualified audit opinion. Irregular expenditure stood at R23.4bn, an increase from R19.6bn the previous year.

Similarly, fruitless and wasteful expenditure escalated to R1bn, up from R988m the previous year. Once again, the Auditor-General sharply raised the concern about instability at PRASA.

Less than a month after expressing his full confidence in the previous board and management, the minister of transport, @MbalulaFikile, has finally seen the light and dissolved the inept board of @PRASA_Group, placing the railway operator under administration.

Minister Nzimande appointed an Interim Board in April 2018 for a period of 12 months, with a mandate to turn around the fortunes of PRASA, as it became evident that the downward spiral was continuing without let. A Shareholder Compact was signed with this Board mapping out priorities they were expected to deliver on.

When the term expired in March 2019, it was extended by 6 months. At the end of the 6 months, the term was extended by a further 6 months ending on 30 April 2020 or until a new board has been appointed. This was done to enable us to run the process of appointment of a new Board having duly looked into the affairs of PRASA incisively.

Over the last few weeks we have conducted a review on the performance of the Board and of the entity as a whole. This assessment followed the Government Technical Advisory Centre (GTAC) assessment report, compiled after engagements with a number of managers. Based on this report and other considerations, we arrived at a conclusion that PRASA has deep-rooted challenges that require decisive interventions at leadership and management levels.

Merely replacing an interim Board with a permanent Board will not address the deep-rooted fault lines at PRASA. The GTAC report highlights the dysfunctionality of PRASA and records non-compliance with financial prescripts that warrant immediate action and intervention, in addition to the initial intervention of the War Room.

The Auditor General (AGSA) in its Management report for the 2018/19 financial year raised critical issues on governance, which included a finding that PRASA did not take effective and appropriate steps to prevent irregular and fruitless and wasteful expenditure, as required by law. The majority of the irregular, fruitless and wasteful expenditure disclosed in the financial statements was caused by non-compliance with supply chain management prescripts, as well as payments made, where the value derived could not be justified.

The AG also highlighted in the report that there has been no progress in addressing the significant deficiencies noted over the oversight by the accounting authority and senior management regarding financial and performance reporting, compliance and related internal controls. This is evident from the regressed audit outcomes.

Ramaphosa: Whether it is Transnet or Eskom, Denel or Prasa, we are taking all necessary measures to turn them around.

There is no doubt that the Board is responsible for the systems of internal control. These are designed to provide reasonable, assurance as to the reliability of the annual financial statements, to adequately safeguard, verify and maintain accountability of assets, and to prevent and detect material misstatement and loss.

Since the interim Board’s appointment, the affairs of the entity have not improved but have regressed instead as evidenced by the disclaimer, following two financial years of stagnant audit outcomes position of “qualified with findings”.

Having considered all these issues and other aspects of the AG’s report, the delivery against the signed Shareholders Compact, the PFMA and King IV code, I arrived at a conclusion that a more incisive intervention that enables quick turn-around times in decision-making with a view to stabilise operational performance is more urgent that an appointment of a permanent Board. This view was supported and agreed to by Cabinet.

I have therefore decided to dissolve the Interim Board and place PRASA under administration with immediate effect. The Administrator will run the affairs of PRASA as a de facto Board of Control as envisaged in the PRASA founding law and as an Accounting Authority in terms of the PFMA.

In order to enable swift and rapid decision-making as well as build management capacity to decisively manage turn-around interventions, the secondment of the Acting Group CEO, Dr Sishi, is withdrawn with immediate effect. The role of the Group CEO will be integrated into the role of the Administrator as an integral part of the intervention. Thank you Dr Sishi for your contribution and efforts in addressing challenges at PRASA.

This intervention will continue for 12 months, after which a permanent Board will be appointed to run the affairs of PRASA. We will ensure that the process to recruit a permanent Board is initiated at least 6 months into the tenure of the Administrator to ensure a seamless transition at the end of the intervention.

I am pleased to announce the appointment of Mr Bongisizwe Mpondo as the newly-appointed Administrator of the Passenger Rail Agency of South Africa, with immediate effect.

I have no doubt that Mr Mpondo has the right credentials to tackle the challenge of turning around PRASA, address its operational deficiencies and tackle intractable challenges confronting its Divisions and Subsidiaries. In the coming days, we will be concluding a Service Level Agreement, which will outline in detail the terms of reference for his engagement. Among the Administrator’s key priorities are the following:

Mr Mpondo is an entrepreneur who has an extensive record in corporate governance and working with public institutions to improve operational efficiencies. He has served on the Boards of many public entities which include:

He has published many papers and articles covering topics as diverse as freight logistics, aviation, cost of increased demand for transportation, land use and sustainable development. He has led a diverse range of projects that include project management for the Department of Transport for the 2010 World Cup, serving as a transaction advisor for the Housing Development Agency and many others.

Mr Mpondo will put together relevant teams with the requisite skills and capacity to support him in the undertaking of his work.