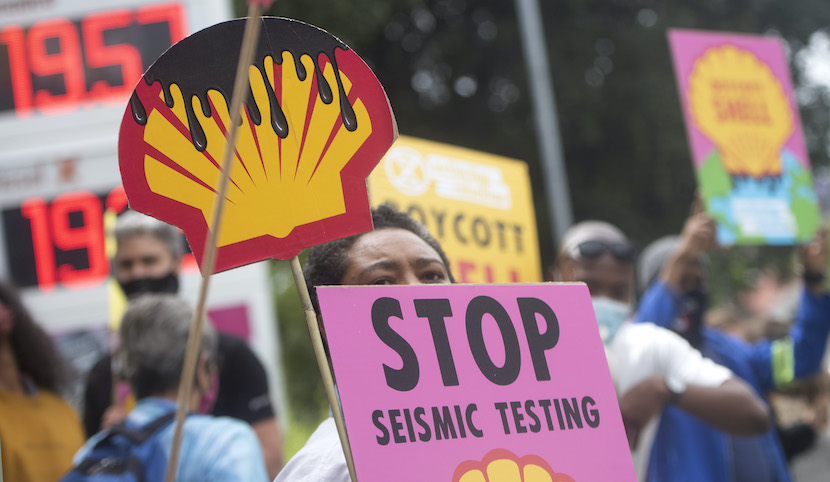 Freelancer writer, Ivo Vegter, in his inimitable style, may not win many environmental activist friends with this brutal reality-check, but he may well influence a few people. As is so often the case, when deeply held convictions and beliefs are confronted with a lack of verifiable facts, or somebody has the temerity to challenge an agreeable High Court judge, the proponent is bound to end up parrying a shower of brickbats. Throw in some satire, as Vegter does, and you could risk provoking a veritable crusade against you. Which is what courageous journalists often do, in service of the common weal. Unlike politicians or activists, they tend not to play as much to the gallery. Nobody is above criticism, even judges, so long as the commentary is not sub-judice or in outright contempt, neither of which I believe apply to this piece, though many will probably disagree. Judge for yourself. Story courtesy of The Daily Friend. – Chris Bateman

Exploration blocked because dead people live in the sea

In a wild judgment on the Wild Coast, the High Court granted an interim interdict blocking a seismic survey, inter alia because some local people believe it would disturb ancestors who reside in the sea.

That case sought an urgent interdict against a seismic survey which had begun on 1 December, as per an exploration right first granted in 2014, and renewed twice thereafter, most recently in August 2021.

The applicants had several procedural complaints, and claimed a reasonable apprehension of irreparable harm should the interdict not be granted.

The judge in that case, Acting Judge Avinash Govindjee of the High Court in Makhanda (Grahamstown), dismissed the case, on the grounds that the applicants had failed to convince him that there is a well-grounded apprehension of irreparable harm if the interdict was not granted.

‘The applicants’ submissions in this regard, related to the detrimental impact of the seismic survey on the environment, and marine life in particular, are speculative at best,’ the judge wrote.

He also ruled that in light of the ‘massive financial consequences’ of granting such an interdict, and the ‘paucity of information as to the likely environmental harm’ the balance of convenience favoured the responding oil companies.

Durban attorney Ian Cox wrote in these pages that science – or rather, the absence of science that showed any harm – had won the day. I previously wrote of my surprise that the media so uncritically supports activists against legitimate industry ‘when their claims are so obviously ignorant, false or wildly exaggerated, and so easily debunked’.

It might seem unfair, but the oil and gas exploration companies had to return to the same court within days to defend against a different group of applicants seeking essentially the same thing: an interim interdict on proceeding with the seismic survey while the legality of their exploration right was brought before the court.

The environmental activists were getting a mulligan.

This time, a different judge, Judge Gerald Bloem, came to exactly the opposite conclusion (full judgment), despite being faced with very similar facts.

Local news outlets celebrated the ruling, as did the activist mainstream media, delivered on Tuesday 28 December 2021, saying: ‘The judgement is monumental and has international repercussions for Seismic Surveys (sic) taking place across the world.’

That, it isn’t. It is, after all, only an interim interdict, and a full hearing might yet – and probably will – overturn it.

Besides, there are reasons to believe that international judges, when reading Judge Bloem’s ruling, might die laughing before they get a chance to consider it as a respectable precedent.

The anglers and the jet skiers, the puppets the NGOs recruited to gain standing in the first case, were griping because that’s what privileged people do. For some reason, they think that oil and gas exploration between 20km and 80km offshore is going to interfere with their precious fun in the sun.

The second group of applicants, led by a non-profit that opposes all ‘imposed, unsustainable, so-called “development” projects’, including mining and building a new N2 highway across the former Transkei, involves a local communal property ownership association, three fishers, and a sangoma.

Each of these individuals claim to act on behalf of ‘fellow Wild Coast fishers’, although these claims do not appear to have been tested.

The judgment claims that the exploration companies failed to have actively canvassed the opinions of these specific fishers, instead of relying upon consultations with traditional leaders in the area and open invitations to participate in community meetings. Therefore, the consultation process was ‘inadequate and substantially flawed’.

Besides some hand waving about customary rights to the land, always having fished and combed the shore for sustenance, and using sea water and beach sand for their supposed healing powers, a highlight of the applicants’ testimony is the claim that ‘some of the ancestors reside in the sea because they loved the sea in life and some of them died in the sea’.

It is, the judge wrote, ‘considered very important by members of the Amadiba traditional community not to disturb these ancestors through pollution or other disturbances’.

This sacredness of the ocean, because dead people live there, increases with depth, the applicants allege. So a group of coastal subsistence fishermen are using claims of supernatural beliefs to prohibit anyone from disturbing what is essentially the entire ocean.

Judge Bloem goes on: ‘That belief should not be difficult to comprehend by those who do not share the customs of the Amadiba traditional community if regard is had to the fact that graves on land are not easily disturbed or moved’.

This is a remarkable line of reasoning. Graves on land do not encompass all the land. They might block development right on top of the grave, but even then, graves can be moved.

Judge Bloem’s ruling suggests that because the sea contains human remains, and some people therefore consider the ocean to be sacred, the entire ocean ought to be off-limits to ‘pollution or other disturbances’. (There go your jet-skiing rights, you sacrilegious elites!)

The learned judge goes even further, however. Because the oil companies did not dispute the applicants’ cultural and spiritual beliefs, he writes: ‘There is no reason not to accept the applicants’ evidence in that regard.’

However outlandish the claims may be, it isn’t up to the court to weigh them, but merely to ‘accept that those practices and beliefs exist’. And because they exist, the court must protect them, and the people who claim to be offended.

So, a mere claim of belief in the supernatural, if left undisputed, becomes acceptable evidence, and because some people claim dead people live under the sea and wouldn’t like to be disturbed by the likes of Shell, this merits inflicting a loss in excess of R1 billion upon the oil companies involved.

To underscore the judge’s remarkably one-sided view, he proceeds to summarise the views of a handful of ten ‘experts’, all of whom made speculative claims of potential irreversible harm, none of which was supported by real-world evidence that seismic surveys, which are extraordinarily common, actually cause more than minor and temporary harms.

Yet, Judge Bloem writes, ‘There is no reason not to accept their evidence.’

The oil companies disputed these claims, of course, but the judge summarily rejected their response because they were deposed by the country chairman of Shell, who failed to ‘show that he has the requisite expertise to refute the expert evidence relied upon by the applicants’.

Ignoring entirely that the oil companies had a mere seven days to produce an answering affidavit in the matter, the judge held it against the respondents that they failed to recruit credentialled experts to rebut each particular claim by the applicants’ experts, and placed no value on the attempted rebuttal at all.

By disqualifying the respondents from having an opinion, therefore, he accepted every single speculative claim of harm made by the experts marshalled by the applicants. Not for Judge Bloem the adversarial system of justice.

He justifies his failure to demand firm evidence by appealing to the precautionary principle: ‘where there are threats of serious or irreversible damage, lack of full scientific certainty shall not be used as a reason for postponing cost-effective measures to prevent environmental degradation’.

So ‘experts’ can make any speculative claim of harm, without having to prove that this harm has occurred in the past, or is likely to occur in the future, and thereby block any project.

Since the judge rejected the claims in the respondent’s Environmental Management Programme that harm is unlikely, and potential harm will be mitigated by extensive measures, the precautionary approach means that the oil companies would have to conclusively prove a negative: that harm certainly will not occur, which is a ridiculous standard.

Judge Bloem goes on to rule that the tremendous damage that even an interim interdict will inflict upon the oil companies – R350 million immediately, and over R1 billion in due course – does not trump their failure to consult with the particular applicants in this case.

He pretty much blames the oil companies for their predicament, despite the fact that they obtained an exploration right in the belief that they had jumped through all the required hoops, and tells the respondents to suck it up.

Throughout the judgment, Judge Bloem sounds extraordinarily sympathetic to even the most outlandish of the claims of the applicants, while high-handedly dismissing absolutely every representation that the respondents made.

If I were the type to accuse honoured high court judges of bias, which I’m not, I’d say Judge Bloem was biased as all get-out.

Yet this case could stand as a case study in environmental obstructionism and judicial activism.

Environmental lobby groups who cynically recruit unsophisticated applicants who can easily be scared with baseless claims of harm and disrespect may celebrate this judgment. So might armchair environmentalists who oppose any and all economic development, even in the face of grinding poverty and deprivation.

However, what was not delivered here was justice.