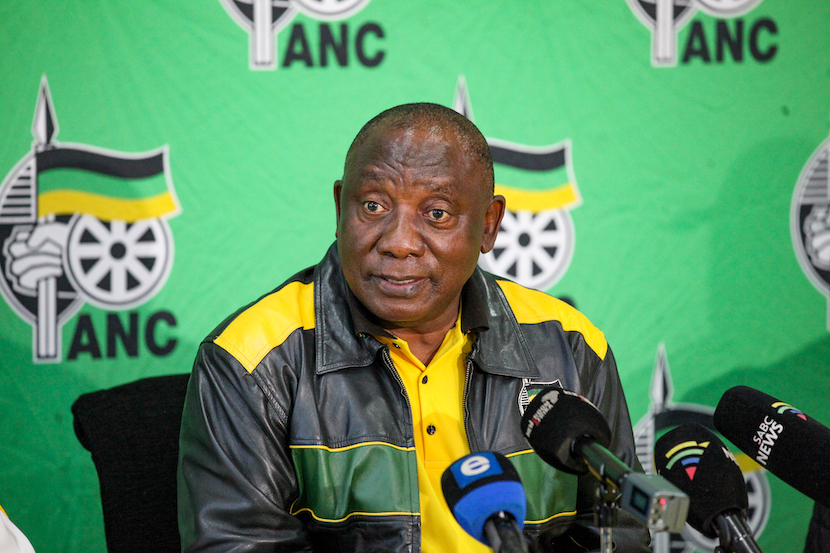 It may still be early in the year, but the temperature is already rising in the build-up towards the ANC’s elective conference that is taking place in December 2022. It appears that Tourism Minister, Lindiwe Sisulu has thrown her hat in the ring with her public attack on the judiciary and the Constitution. The Eurasia Group’s African Director, Shri Pillay told BizNews that President Cyril Ramaphosa is likely to retain the ANC leadership as the race commences. Pillay says the runup to the conference could be marred by violence and he predicts challenges by younger ANC members for positions in the party. He also discusses Ramaphosa’s reaction to the Zondo Commission and whether this elective conference could be a swansong for the ruling party. – Linda van Tilburg

Ramaphosa enters the year in a strong position:

I think the early indications are that President Cyril Ramaphosa’s position as President of the ANC is relatively safe. I think there’s a realisation within the party, across both factions of the ANC, the RET faction and the CR17 which is now the CR22 faction that Ramaphosa’s popularity is greater than that of his party across South Africa, making it an asset for the ANC heading into the 2024 general election. So, I think if you take that view and look forward to 2024 election, it’s something that the ANC needs to rely on as a party, given the reputational damage it suffered due to state capture, service delivery as well as the July unrest which occurred in South Africa. So, I think what we’re going to see this elective conference is an elective conference that is characterised by intense competition for the remaining top five positions in the party, as well as a high level of contestation for the deputy-president position of the ANC, as well as that of secretary-general. I think also you quite rightly said Lindiwe Sisulu being quick out of the starting blocks in 2021 and I think this is something that’s going to be a theme throughout this year, is further attacks on state institutions, primarily by those who are looking to be the leader of the RET faction within the ANC. And I think, you know, it would be quite symbolic that these attacks would generally come through op-ed pieces in newspapers, as we’ve seen over the years. So, I think that will be a running theme throughout 2020 to as we build up to the conference.

The campaign for leaders’ positions in the ANC could lead to violence:

There’s a couple of factors that do raise the risk of political violence in South Africa. Primarily, of course, would be the findings from the Zondo Commission into state capture and the publication of the reports, which will likely implicate former president Jacob Zuma, as well as his inner circle in state capture and which could be used as a narrative by the RET faction within the party to claim that there’s a broader political conspiracy against them. The destabilising effect of this really comes in when you look at the potential removal of political elites at a local, provincial and national government level through the state capture report’s findings. And also, I think it’s important to note that a number of the implicated persons in this report span a large range of government, state owned enterprises, as well as more local bodies that will likely come to the fore. And I think this really now does depend on whether or not President Cyril Ramaphosa decides to act on the outcomes of the report, which I think he will. It’s just a question of how willing he is to implement the full ambit of recommendations that Acting Chief Justice Zondo has come up with.]

Less secrecy in the ANC electoral process and younger members are keen to challenge leadership positions:

One thing that’s always been effective in selective conferences is a high level of secrecy over the electoral process as it were and that’s changed substantially over the years of Polokwane, then Nasrec, and I think this year you’re going to see likely it’ll be a more open contest with politicians and high-ranking government officials that are party members looking to stake their claim quite publicly. As we saw with Minister of Justice Ronald Lamola on the January the 8th at the ANC’s celebrations coming out and saying that he’d be willing to run for the deputy-president position. This is something that previously you wouldn’t really have seen also from someone so young in the ANC. The level of ambition of younger ANC leaders to try and depose some of the older generation within the party to take their rightful place amongst senior leadership positions in the party, is something

You can’t count David Mabuza out at any time. They call him the cat for a reason; he’s has more than nine political lives, that’s for sure. And I think ahead of this conference, while many people are writing him off as having burnt his political capital and not really having been somebody that’s been visible enough in the role as deputy-president. I think for President Ramaphosa David Mabuza played a role at the last conference, which ultimately delivered him the ANC presidency. This time around, given his health issues and also, changes within the political architecture at a provincial level in the North West will count against him. I think that there will be a new deputy president of the party. What happens to David Mabuza is a bit of a guessing game at this moment in terms of whether he retains a top six position in the party. And I think that’s something that will be a watch point.

Other members of the ANC tipped for leadership positions:

The other people to watch are Paul Mashatile who is somebody that I think has aspirations for higher office within the party. I don’t think you can count him out. I also think President Ramaphosa will have to pay back some of the goodwill that has been shown to him at provincial branches in the country where members of his faction have been fighting to retain power for him within the NEC as well. There are a number of of younger ministers as well as provincial allies that the president will have to back up his slate. And I think what I saw is somebody that should have to be watched as well, as well as minister Mmamoloko Kubayi-Ngubane is somebody that has shown a great deal of loyalty to the President. I think the president also showed that she’s a trusted pair of hands in his eyes. You also have other characters within government like David Masondo, Deputy Minister, Young, ambitious, somebody, I think, that has aspirations, but also within the party is quite trusted. So, I think these are just a few of the names that are definitely ones to watch.

As far as Ace Magashule goes , the RET camp is concerned; the ANC step-aside resolution when it was implemented, did side-line a lot of the faction and it really changed the power dynamics within the ANC. I think it portrayed the right message to South Africans that the ANC was trying to clean up its act. It was a bold move by President Ramaphosa and one that is being attacked again this year, with some calling for the step-aside resolution to be abolished. I think that the president also has made it quite clear with the January, the 8th statement that he is trying to instil a sense of discipline within the party and try to really push forward a sense of renewal and change in the organisation. And I think people like Magashule as well as Zandile Gumede, there are a number of political heavyweights that have been side-lined and that won’t play a larger role at the ANC conference.

Could the 2022 ANC National Elective Conference be the ruling party’s swansong?

I think that’s a very valid question. The party’s election results and the local government elections were definitely a wake-up call for the ANC. But I will say that that was something that was expected. The chronic levels of poor service delivery in South Africa for such a long period of time have eroded public confidence in the ruling party’s ability to deliver. Yes, there are a host of contributing factors to this, but ultimately, from a governance viewpoint, the big issue that needs to be dealt with and sees behind is partly the deployment of ANC cadres to local, national and provincial government, but also the skill of those cadres that are employed. Looking at it from an international investor viewpoint, what you want to really see is a more technocratic civil service being formed. That really is going to be a big challenge for President Ramaphosa going forward is, how do you shape a government to create a technocratic civil service that has skills that are necessary to deal with the major challenges that you have in South Africa of high unemployment and low development.

For more on Sri Pillay from Eurasia’s view on Ramaphosa’s response to the Zondo Commission and what the international investor community would like to see in South Africa, tune into BizNews for the full interview.