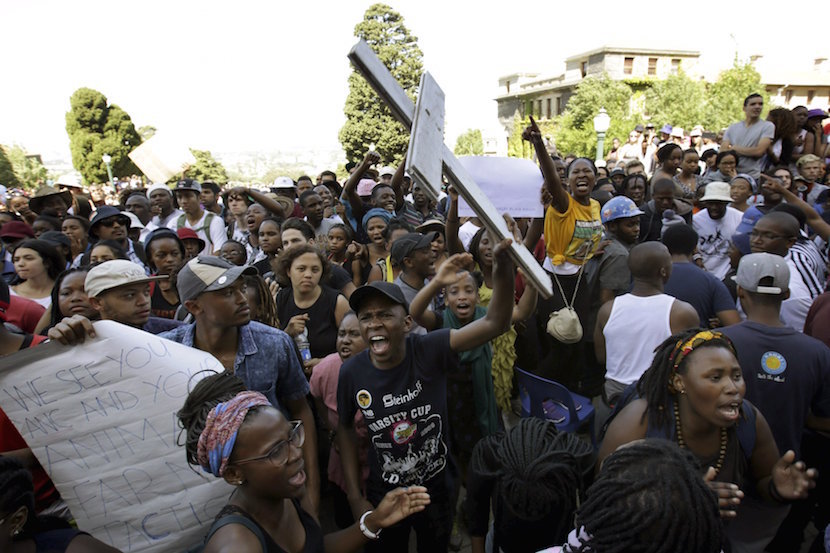 I’m sure Professor Max Price, former vice-chancellor of UCT – at the centre of the storm which radicalised sentiment and stifled free speech – would have something to say about this review of a brutally honest documentation of his once-anarchic campus. The line from Hamlet, ‘Whether ’tis nobler in the mind to suffer the slings and arrows of outrageous fortune, or to take arms against a sea of troubles, and by opposing, end them?’ may not have rung as loudly in his head as it did in others’. Only historians will more calmly pronounce on Price’s responses to the ongoing revisionist, racist chaos, which left liberals towing the line of a repressive new climate, arrived at in this narrative as via continuous, debilitating capitulation. Yet, one suspects that taking up arms against the ‘sea of troubles’ may have ended in a more destructive tsunami. As it is, the cost ran into tens of millions in disrupted studies, torched vehicles, a library, statues and artefacts, plus the suicide of a globally leading black academic and cardiologist. The legacy, however, lives on. Story courtesy of the Daily Friend. – Chris Bateman

Fear and loathing at the University of Cape Town

To read this book is to descend into an Orwellian world of topsy-turvy logic, thoughtcrime, doublethink, betrayal, cruelty, lies and fear. But George Orwell described Nineteen Eighty-four as a “novel”, whereas The Fall of the University of Cape Town – Africa’s leading university in decline, published last year, is fact. Big Brother might not be watching you, or listening to you, but plenty of other people are.

The author is David Benatar, a philosophy professor at UCT. Although a much better edit would have made it more powerful, his book is the work of a man brave enough to speak the truth about the horrors taking place in the institution that employs him. None of the major presses in South Africa would touch his book, which was published by Politicsweb.

That the events Professor Benatar chronicles should have happened at an institution once famed as an island of liberalism in the sea of apartheid madness is one of the bitterest ironies of South Africa’s recent history. Moreover, unlike the disasters that have been inflicted upon this country by the African National Congress and its communist and trade union allies, the disaster that Professor Benatar describes was self-inflicted, some of it by people who would describe themselves as “liberal”.

Much of this book is about academic freedom, the hallmark of any university worth the name because it guarantees the environment essential to the pursuit of knowledge and the search for truth.

The assault on academic freedom and free speech goes back to 1986 when a visit by Conor Cruise O’Brien, a well-known Irish politician and academic, was effectively terminated on the grounds that his safety could not be guaranteed after violent disruption of a lecture by students who took offence at what he said. Thus began a long process of capitulation by top university administrators to violence or the threat thereof.

In 2016, Flemming Rose, a Danish journalist, had his invitation to deliver UCT’s annual academic freedom lecture cancelled by the university’s top management on the grounds that he might have provoked “violent protest”. This did not stop UCT from proclaiming in what the book describes as “doublespeak” that allowing Mr Rose to speak might “retard rather than advance academic freedom”.

More recently, in 2020, in yet another of the numerous attacks of various kinds upon academic freedom documented in the book, UCT top management issued a public denunciation of comments published in a scientific journal by Nicoli Nattrass. The denunciation was issued at the behest of the university’s “black academic caucus”. The university also tried, unsuccessfully, to get the journal and Professor Nattrass to withdraw her paper. Professor Benatar comments that the university’s academic freedom committee maintained a “deafening silence” about the “chilling” effect on other academics of the “mobbing” of Professor Nattrass.

He also observes that “all the threats to academic freedom at UCT come from the regressive left”. With the acquiescence and sometimes active support of groups such as “concerned philosophers”, they have contrived to bring about “academic climate change” in which students of all races as well as academics are scared of saying what they think, not only in lecture rooms but also even in “corridor chat”. A pervasive and enduring toxic climate has stifled debate, while “ideologues and the vicious”, having been granted “endless latitude in bullying and persecuting others”, have “run rampant”.

Race features prominently in the book. There is plenty about the implementation of affirmative action. But there is even more about what Professor Benatar describes in the title of one chapter as “manufacturing the narrative of a racist university”. He argues that white racism, against which there are strong taboos, is much rarer at UCT than paranoid people and opportunists claim. His investigations show that evidence of anti-black racism is “without merit or unsubstantiated”.

Indeed, he says, “there is much more evidence of anti-white hostility than there is of anti-black hostility”. While there is “plenty” of anti-white racism, the main form of anti-black racism at UCT does not emanate from whites. Instead, it occurs when some blacks are targeted by other blacks for not being what the latter regard as “real blacks”. They are called “coconuts, Uncle Toms, colonial administrators or house negroes”. This, says the book, is a “racist technique for silencing or ostracising people who do not comply with one’s own views”.

Although its antecedents go back to the Conor Cruise O’Brien incident, Professor Benatar says the turning point was in 2015 when excrement was thrown at a statute of Cecil Rhodes on the campus, triggering the Rhodes Must Fall and associated “decolonisation protests”. There was widespread support for the removal of the statue, but it waned when the protests became extreme. The university authorities had nevertheless pandered to the criminal element. The upshot was an unusually high rate of resignations and traumatisation, and even a suicide.

UCT, writes Professor Benatar, is not all bad. There are pockets of the university that function really well, and many people of goodwill who span the racial spectrum. Most of these, however, are “living in utter fear of the bullying race-baiters”, the university having consistently betrayed them to some of the worst elements, perhaps “because ideologues now hold a growing number of senior positions”.

He sees his book as the beginning of a process of holding them to account.