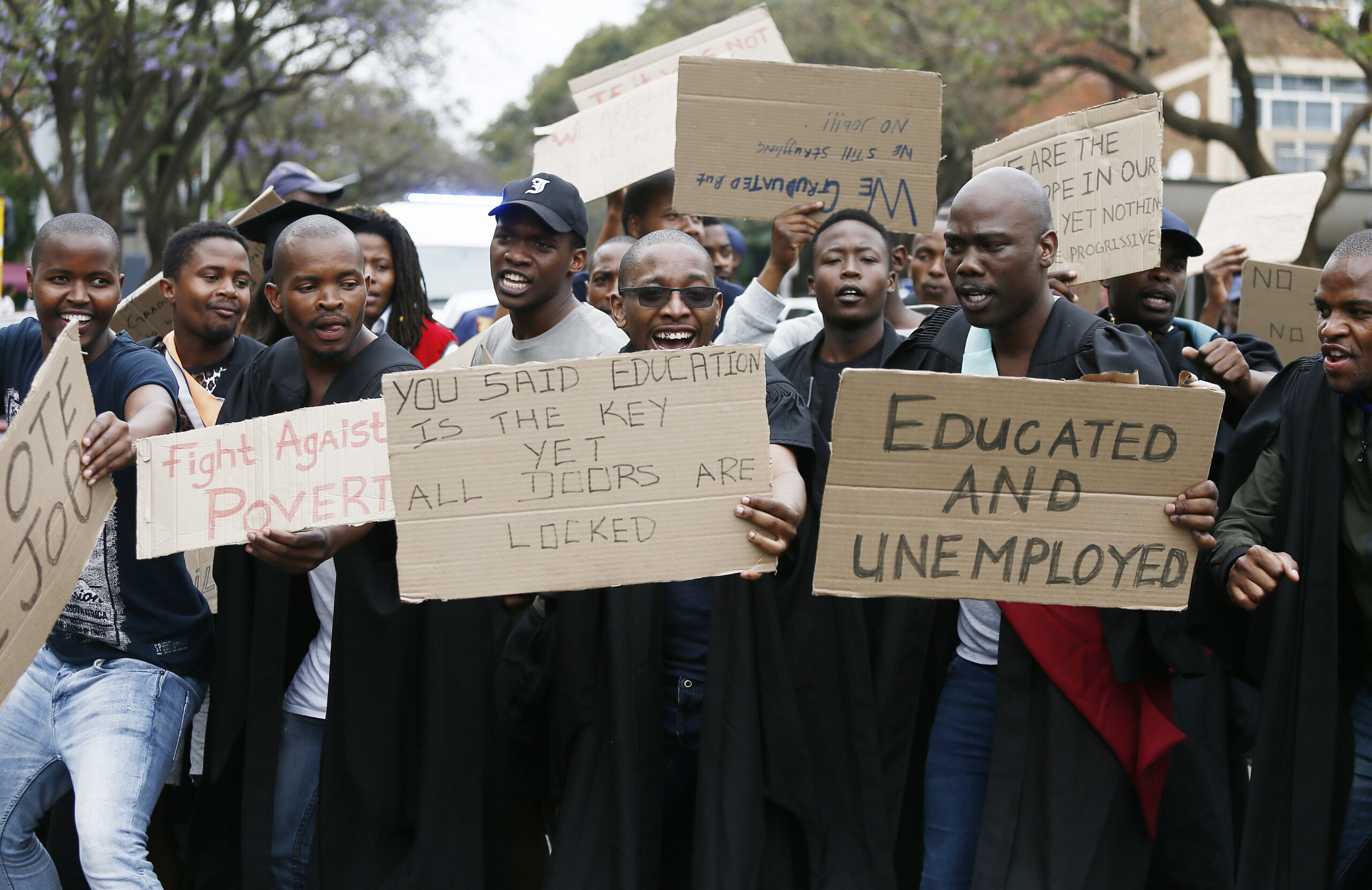 The fact that almost two-thirds of young South Africans don’t have any fixed meaningful employment is often referred to as a ticking time bomb by our politicians – and for good reason. In the piece below, Luveshni Odayar, the 2022 Dialogue and Advocacy Fellow at the Nelson Mandela Foundation, argues that there is a toxic mix of barriers for entry into the workplace spurred on by what is one of the worst and most unequal education systems in the world. Education consistently receives the lion’s share of our budget but we – just as consistently – have little to show for it. In a recent BizNews interview with well-known and respected academic Professor Jonathan Jansen (that you can watch here) – he spoke frankly about the state of our education system and how the government remains fixated on the wrong metrics…one being the matric pass rate. Odayar bemoans much, including the continued pervasiveness of “white monopoly capital” – a term that hasn’t left us since those fine folks over at the now defunct Bell Pottinger injected it into South Africa’s political lexicon. But don’t let a little reference to WMC put you off – the harsh reality is the transformation of the economy has been too slow – with BBBEE being broad-based in name only – entrenching a tiny sliver of wealthy individuals into repeat business by virtue of their ANC connections. This country is in trouble. Go to any protest and you’ll see kids of school-going age in the forefront of skirmishes with police. The issue of youth unemployment was a major gripe when unions descended on the Union Buildings on Wednesday for the “national shutdown” – more a nuisance to authorities than an actual shutdown – but the point remains. – Michael Appel

“The working youth is critical to our future. The economy depends on you. With your hard work and efforts at improving your skills, you can make ours one of the most prosperous nations in the world.” – Nelson Mandela

If, as Nelson Mandela so poignantly put it, “To the youth of South Africa…you are the leaders of tomorrow”, South Africa’s staggering level of youth unemployment should be heeded as cause for grave  concern. The country’s level of youth unemployment remains unrivalled, ranking the highest in the world in 2022 at 63.9% for youth aged 15-24, nearly twice as high as the national unemployment rate of 34.5% and more than four times the global average of 13.6%.

Nearly two-thirds of South Africa’s youth are excluded from participating in the labour market and, therefore, denied their right to work towards income security. Young South Africans already account for 35.7% of the national populace, and with our burgeoning population growth set to make this even higher, failure to sustainably address the issue of our disempowered youth now will only result in the exponential growth of the problem itself, severely maiming the capacity of our leaders of tomorrow to redress it in future.

There are a number of reasons South Africa’s youth continue to struggle to secure employment in an increasingly hostile labour market. Central to these is the fact that an emphasis on capital-intensive growth to date has failed to generate the labour demand required to navigate millions of unskilled youth out of joblessness. This, coupled with a failing education system that has been described as one of the worst in the world, which continues to churn out a workforce that is largely unskilled, perpetuates the gross mismatch between labour supply and demand – a crisis that we already cannot afford.

Year after year, South Africa’s youth unemployment crisis remains topical in the development sector, with think tanks waiting patiently for June 16th to inundate the media with the same innovative statements submitted the year prior, rendered new with the updated Quarterly Labour Force statistics – We need jobs, to create more jobs to get our young people into employment. Needless to say, we do require more jobs, but perhaps a more appropriate and necessary homage to the sacrifice of the youth who took to the streets in 1976 would be to dismantle the very systemic barriers that continue to condemn black youth to a perennial state of unemployment.

While the need to create jobs is necessary, simply creating jobs is, in itself, insufficient – we need to ensure that these created opportunities are gainful. The unfortunate reality is that our current socio economic climate, which sees young people challenged with the task of seeking out employment opportunities in a barren labour landscape, has also yielded the “you’re lucky to have a job” mentality, which sees employers able to capitalise on the desperation of a disenfranchised and vulnerable youth.

As such, we find young graduates being exploited for their critical skills, their output appropriated by senior associates – “senior” in title, but not always senior with respect to levels of qualification, initiative, or talent – with little opportunity provided to ascend above the ever-slippery bottom rung of the formal sector employment ladder. Internships and learnerships that fail to utilise their skill sets, and which do not equip them with the requisite skills they need to advance in the labour market, nor guarantee prospects for future employment, reduce the emergent labour force to a pool of cheap labour. The depressed remuneration for young graduates is especially of grave concern, with the average salary for an intern being marginally higher than the set minimum wage, making South Africa a non-lucrative environment for young graduates to invest their skillsets.

Underemployment is an under emphasised blight on the prospects of our youth and, therefore, is as much of a problem as unemployment in that it perpetuates inequity with respect to long-term job security and prospects for growth – issues which simply having a job does not address.

When who you know trumps what you know in the pursuit of career opportunities and advancement, our Achilles heel with respect to achieving true economic transformation is revealed in the fact that white monopoly capital remains overwhelmingly intact. The fact that the apartheid racial pecking-order prevails in the present patterns of corporate ownership necessitates an urgent de-racialisation of the economic sector, demanding a shift from tokenism to meaningful diversity, wherein the demographic makeup of our economy mirrors that of our country. Furthermore, we need to strive towards building mechanisms that connect the youth who find themselves lacking inherited social capital, and the privilege this purveys, to these jobs advocated for by actors of change. This requires that we broaden the focus on not only educating and skilling our youth, but in building and facilitating equitable access to networks that can function to bridge the gap between education and employment.

The patterns of intergenerational poverty that continue to dog us well into the democratic era have ensured that many in need of jobs simply cannot afford to look for them. The cost of internet data, commutes, and the use of cybercafés becomes that much steeper when it necessitates that one’s food security is forfeited.

The Basic Income Grant represents one solution put forth by government, which aims to support young people, including discouraged jobseekers, by safeguarding their basic right to survive so that they may then strive towards building a career. The grant has been met with some scepticism, with many critics asserting that no-strings-attached stipends will incentivise laziness among those so thoroughly condemned to intergenerational poverty with no opportunity to work in the first place. While such arguments reek of the good old-fashioned racism of a bygone era, it is interesting to note that opponents of such mechanisms are too often individuals who can boast having sound nutrition and a roof over their heads – often victims of systemic privilege, rendered unable to sincerely empathise with the plight of poverty that sees the majority black youth dispossessed of future prospects.

Simply advocating for job creation does little to address the deeper systemic inequities that continue to hinder us on our path to transformation. Promoting equity of access to employment opportunities entails that barriers to labour market participation be broken. It is, therefore, imperative that we put in place mechanisms that extend social security to those lacking the unearned privilege of those they compete with for limited jobs, thereby capacitating marginalised jobseekers with the economic freedom to stay the course in pursuit of economic self-sufficiency.

That South Africa’s levels of youth unemployment continue to burgeon despite the recent bout of job creation, is truly telling. Advocating for job-creation and economic growth alone, to make jobs more plentiful, does not address the systemic challenges at the core of the crisis. Equity of access to opportunities for entry and advancement in the labour market are very much congruent with the persistent patterns of socioeconomic inequity inherited from our past. Tackling the youth unemployment problem, therefore, requires that we, as a nation, reckon with our colonial past by identifying and dismantling the systemic barriers that would see our leaders of tomorrow debarred from playing their part in growing and

transforming our economy, let alone prospering from it. Failure to do so does not only compromise the potential of what we can become as a nation, but compromises our very future itself. Let us heed Tata Madiba’s call to action as we forge ahead: “As long as many of our people still live in utter poverty, as long as children still live under plastic covers, as long as many of our people are still without jobs, no South African should rest and wallow in the joy of freedom.”

Luveshni Odayar is the 2022 Dialogue and Advocacy Fellow at the Nelson Mandela Foundation and holds an MSc in Sustainable Development and Environmental Economics from the University of St Andrews.