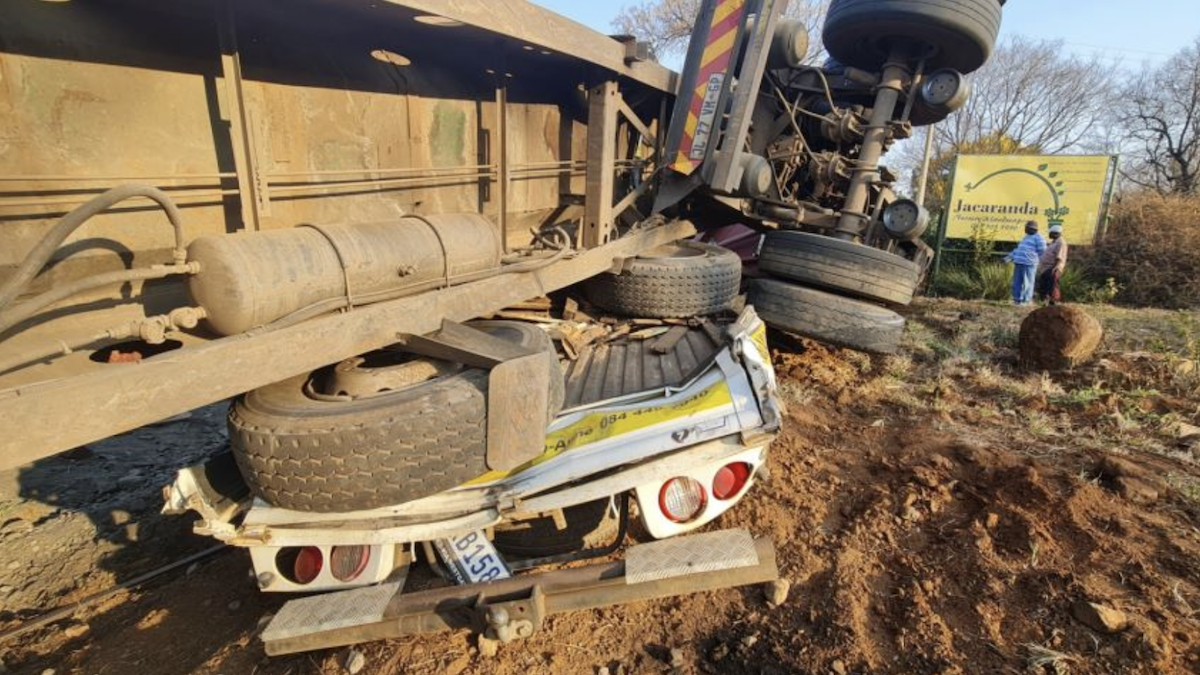 One of the repercussions of South Africa’s rail and ports authority – Transnet – being in utter shambles is that companies are forced to get their goods to market the only other way they can…by truck, often with tragic consequences. In the piece, Patrick O’Leary, editor of FleetWatch magazine, details that collisions are increasing as a result of unroadworthy trucks or driver error, or both. South Africa transports the vast majority of its goods and commodities by road in the wake of a constrained, vandalised and dilapidated rail network. South Africa already has horrendous road fatality numbers and the country’s failing rail authority continues to do the country no favours. In a recent interview I did with the CEO of the Africa Rail Industry Association, Mesela Nhlapo, she said Transnet’s continued inefficiency is costing the South African economy an estimated 10% of GDP. The article below was first published on FleetWatch. – Michael Appel

Side-tippers being seen as the ‘villains of the road’

While the side-tipper segment of the trucking industry has become pivotal in keeping the wheels of the economy rolling in the absence of rail, these rigs are fast being seen as the villains of the roads. This is due to the ills residing within this sector in terms of reckless driving, speeding, bad behaviour and unroadworthy rigs which has raised the hackles of other road users.

Evidence of this is provided by the many adverse comments and complaints being voiced on various social media sites decrying the behaviour of the drivers of these rigs and demanding heavy penalties for any transgressions, including calls for murder charges to be laid against the owners of rigs found to be unroadworthy when involved in a fatal collision. And the problem is – the collisions are increasing.

To position the role of these rigs in the economy, one must look to the failure of the rail system and especially in servicing the commodities arena which has provided a much welcomed boon to South Africa’s purse – no thanks to rail but to road transport. With global demand having risen post Covid, commodities-rich South Africa has benefitted greatly as has the side tipper market.

A recent article written by Terence Creamer in Engineering News acts as a perfect example of how trucks have had to take over what should be the role of rail. In an article headed ‘ArcelorMittal to seek access to rail network amid a collapse in Transnet service’, Creamer quotes ArcelorMittal’s CEO Kobus Verster as saying that the “dysfunctional” rail situation has resulted in the company resorting to road transportation for as much as 35% of its iron-ore. At one point, Vanderbijlpark was receiving 6 500 trucks a month. “It should not be receiving material by road at all,” Verster said.

And that’s the point – a lot of the goods being carried by side-tippers should be on rail but there is no viable, reliable, cost effective and efficient rail system to talk of; thus the increase of these trucks on our roads – not only serving local companies like ArcelorMittal but also our global export markets. If it weren’t for these rigs, South Africa would have lost out on many billions of Rands of foreign earnings. As it is, according to Creamer’s article, the intense period of rail disruption experienced by ArcelorMittal during the first half of 2022 cost the company some R650-million in lost sales.

So these rigs are paying a vital role in the economy – but there is a downside. While many companies operate their rigs to Best Practise standards, there are many others who are cutting all sorts of corners and it is these who are causing the problems and giving the whole sector a bad name.

One example was a crash which occurred on the R512 on July 16th when a light commercial vehicle was crushed under a side-tipper, killing the driver of the van. When FleetWatch inspected the truck combination on the scene, it had absolutely no brakes on the trailers. The name of the man who was killed was Joe Strydom – a father much loved by his family and the community. That truck should not have been on the road and because it was, a family has been left devastated.

FleetWatch posted this incident with comment and photographs of the empty brake drums (no brake shoes) on our Facebook page. The post reached over 227 000 people and solicited 267 comments. And it was the comments that showed just how ‘gatvol’ people are of such unroadworthy rigs operating on our roads.

Then on July 27th, another big crash occurred on the N3 on Town Hill. It wasn’t long after the incident occurred that a video taken by someone who had followed the rig down the hill went viral. It showed a side tipper combination careening out of control with smoke rising from his brakes until it sideswiped another truck, hit a lowbed truck and ended up on its side on the other lane after mounting the centre median.

The problem here was that according to the person who took the video, the driver of the side tipper combination had failed to stop at the compulsory stop at the top of the hill and thus obviously started off down the hill at speed.

Although there will be a full investigation, my guess looking at the video is that as the rig gained speed, the driver ‘sat’ on his service brakes in an attempt to slow down which in turn, overheated the brakes to the point where brake fade occurred. He could not stop. The result can be seen in the accompanying video and pics. Both lanes were closed for ages while clean-up operations were conducted.

FleetWatch again posted the N3 incident on our Facebook page warning other truckers of the delays. It reached close to 42 000 people and again, among the 92 comments were indications of people being ‘gatvol’ with side-tippers.

The first incident involved owner negligence (under Section 49 of the Road Traffic Act, it is the owner’s duty to ensure his vehicles are roadworthy and maintained) while the second was due to driver negligence (he disobeyed the compulsory stop). The driver in the first incident is also obviously guilty and if the proper processes are followed, will be charged with culpable homicide.

I have always said that when some politician has a slow news day, he or she will issue a call for goods to be moved from road to rail. That’s dream-on stuff. It is not going to happen for years to come so we are stuck with side tippers. Given that – and the vital role these rigs play in the economy – that then puts the ball in the hands of the owners of these rigs, the drivers of these rigs, and the law enforcement officers.

Rigs must be roadworthy, drivers must be trained with the right paper-work and qualifications and traffic officers must ensure they inspect on-the-road rigs for compliance. Also, mines must do their job of inspecting all rigs that come onto their premises to ensure they comply with the Road Traffic Act. Aren’t the mines all about Health and Safety. Well, it seems they are failing in this because many of these operators are getting loads from the mines and hauling with tragic consequences such as was seen on the R512 crash. The mines need to get their acts together and play a role in ensuring safety on our roads.