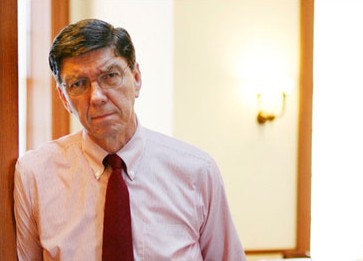 They tend not to show it, but once you get to know them you’ll be surprised at how many of the country’s top executives have deep faith. Some, like Discovery’s Adrian Gore, verge on religiously orthodox. Gore refuses to allow anything to interfere with his Sabbath and makes no secret of that fact. Former Gencor boss and then Finance Minister Derek Keys is another whose faith is at the core of his existence. But nobody I’ve met comes close to Clayton Christensen who earlier this month was once again acknowledged as the world’s top management thinker. During a session in Davos last year he told us he lives his life not by kudos or recognition received on  earth, but by what he will be able to answer one day to his maker. With more Clay Christensens, the world would be a better place. – AH

There’s a global over-supply of Awards. Which is perhaps why we pay so little attention to them, even the really prestigious few. That’s the only possible reason most missed last week’s news of Clayton Christensen topping the Thinkers50’s biennial table for the second time running.

Thinkers50 describes itself as the Oscars of Management Thinking. Launched in 2001, every two years it assesses and ranks living management thinkers. In seven editions, only four have topped the list.

Peter Drucker headed the first two; Michael Porter was #1 in 2005 and CK Prahalad was on top of the table in 2007 and 2009. Since then it has been the Clay Christensen show.

A surprise winner in 2011 (he’d only been ranked 28th in 2009), the Harvard Business School Professor and father of disruptive thinking last week cemented his position among the greats.

It truly couldn’t have happened to a nicer guy.

Having encountered Christensen’s work for the first time after the 2011 ranking, I became a devoted follower. And after meeting him in Davos last year, an even bigger fan.

The tall (6ft 8in), quietly spoken 61-year old is a rarity in the secular world. A Mormon, he has deep faith in his Higher Power and talks about God often and publicly. I admire that. As a Rhodes Scholar (Oxford 1977) he also has an interesting link with my homeland.

It’s not only in spiritual matters where Christensen swims against the tide. His breakthrough work, The Innovator’s Dilemma, was published in 1997. A result of years of research into disruptive businesses, it is a seminal classic, widely regarded as one of the five best business books ever written.

But it is in overcoming his personal challenges that Christensen really inspires.

For half his life he has lived with Type 1 diabetes. In 2007 he suffered a massive heart attack; has overcome a stroke that still affects part of his memory; and three years ago was diagnosed with cancer.

Yet through all of it, his demeanour hasn’t changed. His wife Christine told me none of this affected his outlook on life. But did grouse that now she is the one who has to shovel the snow outside their Boston home.

Thinkers50 describes Christensen’s influence on business as profound: “He introduced the idea of disruptive innovation to a generation of managers.” More recently he has applied his theories to education and healthcare, receiving further plaudits.

But for me, his major contribution is his most recent book, How will you measure your life? A masterful work, its message reaches far beyond business scientists. It is the most influential book of thousands I’ve read – Covey’s 12 Habits and Peck’s Long Road included.

The book was born from Christensen’s pondering why the lives of so many Harvard classmates turned out so badly. The same thing, he writes, was apparent in the 33 Rhodes Scholars of his year.

His classmates had arrived as not only academically bright, but as well-rounded, accomplished people with much to offer and the world at their feet. Yet as the years went by, the lives of many ended up completely different to the way they had anticipated.

As Christensen writes: “I know for sure that none of these people graduated with a deliberate strategy to get divorced or lose touch with their children – much less end up in jail. Yet this is the exact strategy that too many ended up implementing.”

So he applied his management theories and comes up with fascinating conclusions. And suggestions you’d never expect from the undisputed champion business thinker.

Clayton Christensen is an inspiration, a motivator and a mentor all wrapped into one.  If you haven’t discovered him yet, put that right. Soonest.

* Alec Hogg is a writer and broadcaster. He runs Biznews.com. This column appears weekly as Rational Alternative in the Financial Mail.