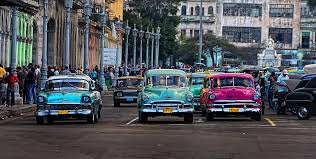 During these holidays I’ve been brushing up on my economics, including revisiting ideas of Scotsman Adam Smith whose Wealth of Nations changed the way most of the world approaches the subject. Most, but not everyone. After half a century Cuba is only now emerging from a socialist-instilled time-warp. Primarily because long-time funder Venezuela has really serious problems of its own, inherited from the economically destructive policies of the late populist President Hugo Chavez. This is the experiment that misguided socialists worldwide should be studying. Those denialists who ignore what happened behind the Berlin Wall. – AH

By Jordi MIRO and Ernesto TOVAR of Agence France-Presse

Venezuela confirmed Tuesday that it has entered recession, while annual inflation topped 63 percent, exacerbating the outlook for an economy already hit by crippling shortages and crashing oil prices.

That is a new blow for leftist President Nicolas Maduro, whose approval rating is at a low of 24 percent going into legislative elections next year that could force the followers of late socialist firebrand Hugo Chavez from power for the first time since 1999.

Analysts had said for months that Venezuela was likely in recession.

But the diagnosis had not been confirmed by official statistics, which the central bank, in violation of its own rules, has released only irregularly as the economy has worsened in recent months.

The inflation rate, a figure that had not been released since August, came in at 4.7 percent for the month of November and 63.6 percent for the year — among the highest in the world.

Maduro’s government has introduced mandatory price cuts and rent controls in a bid to rein in the increases, but has not managed to get the inflationary spiral under control.

Many analysts were expecting Maduro — given the worsening situation and grim outlook — to use his press conference to announce some economic policy shifts.

Yet in a marathon three-hour address, the president only unveiled his economic targets for 2015, rather than making new policy proposals to address severe shortages of basic goods.

Venezuela is estimated to have the largest oil reserves in the world but depends largely on imports for basic goods, including food and medicine.

The shortages helped fuel violent protests against Maduro’s government from February to May in which 43 people were killed.

The central bank said the protests “prevented the proper distribution of basic goods to the population and the normal production of goods and services.”

It blamed the demonstrations for an “economic reversal and a fall in economic activity.”

Price increases were the sharpest for housing, food and alcoholic beverages, and restaurants and hotels, according to the central bank.

It has not published the index that measures scarcity since March, when it found that 19 categories of key products were experiencing “serious supply problems.”

Falling crude prices have taken a massive extra toll on a country that gets 96 percent of its foreign currency from oil.

According to Maduro, Venezuela’s oil export price has plunged from $95 a barrel in September to $48 today.

He accused the United States of waging an “oil war” to hurt major crude producers like Venezuela and Russia, both currently at odds with the Americans.

A boom in shale oil in the United States has upended the world market, causing crude prices to hit a string of five-year lows in recent weeks.

Producers’ cartel OPEC added to the downward momentum last month by ruling out a production cut — a decision pushed through by wealthy Gulf states over Venezuela’s furious opposition.

By Corina Pons and Andrew Cawthorne of Reuters

CARACAS, Dec 30 (Reuters) – President Nicolas Maduro vowed on Tuesday to reform Venezuela’s Byzantine currency controls in early 2015 as part of a six-month plan to shake Venezuela out of recession, but foes accused him of incompetence and inaction.

After sitting on GDP data all year, the Central Bank announced that OPEC member Venezuela had entered recession, with the economy contracting in each of the first three quarters: by 4.8, 4.9 and 2.3 percent, respectively.

Confirming Venezuela as the region’s worst-performing major economy this year, the bank also said 12-month inflation reached 63.6 percent in November, the highest rate in the Americas.

Maduro vowed to head up a six-month plan to turn around the economy in 2015 by reducing inflation-inducing liquidity, boosting international reserves, cutting unnecessary costs, and reforming the three-tier foreign exchange system.

“We are going to perfect the currency system,” he told a news conference, without giving much further detail on that or the other measures. “2015 will be a year of economic recovery … great economic transformation.”

Opponents quickly slammed Maduro’s comments as devoid of detail and real solutions for the ailing economy.

“Yet again, no announcements. He doesn’t know what to do,” opposition leader Henrique Capriles fumed. “Today makes clear to all Venezuelans that with Nicolas we will not escape the chaos.”

Venezuela, whose last recession was from 2009-2010, has been handicapped by the plunge in oil prices. Venezuelan crude, which provides 96 percent of hard currency revenues, has halved from mid-year to $46 per barrel.

Venezuela’s central bank had not published inflation data since August. The figures released on Tuesday put September inflation at 4.8 percent, October 5.0 percent and November 4.7 percent, compared with the same months of 2013.

The bank said opposition demonstrations during the year had disrupted both distribution and production, causing an inflationary spike and the GDP decline.

Chavez-era welfare policies have long been popular among Venezuela’s poor, and the bank said social indicators were all improving despite the poor GDP data.

It said extreme poverty was down to 5.4 percent of households in 2014, half the level before Chavez came to power, while unemployment fell to 5.9 percent.

“Despite the protests and economic war during 2014, Venezuela’s economic indicators have improved,” Maduro said.

“This economic war, this fall in the oil prices, is a great opportunity for economic change. 2015 is the year of opportunity, for great change in the economic model.”

Many analysts have been recommending a unification of Venezuela’s currency controls and a rise in gasoline prices that are the cheapest in the world. But Maduro has balked at such measures so far, perhaps wary of a social backlash prior to a crucial vote for a new parliament next year.

“The speech was long on excuses and short on adjustments,” he said. “If Maduro had a million dollars for each of his excuses, Venezuela’s economic problems would be solved.”

The central bank said Venezuela’s balance of payments posted a surplus of $6.8 billion by the end of the third quarter, with a current account surplus of $899 million, and the capital account showing a deficit of $568 million.

Venezuelan exports, of which oil accounts for more than 90 percent, fell 14.2 percent to $19 billion in the third quarter, while imports were down slightly, by 1.4 percent, to $12.2 billion in the same period.- REUTERS