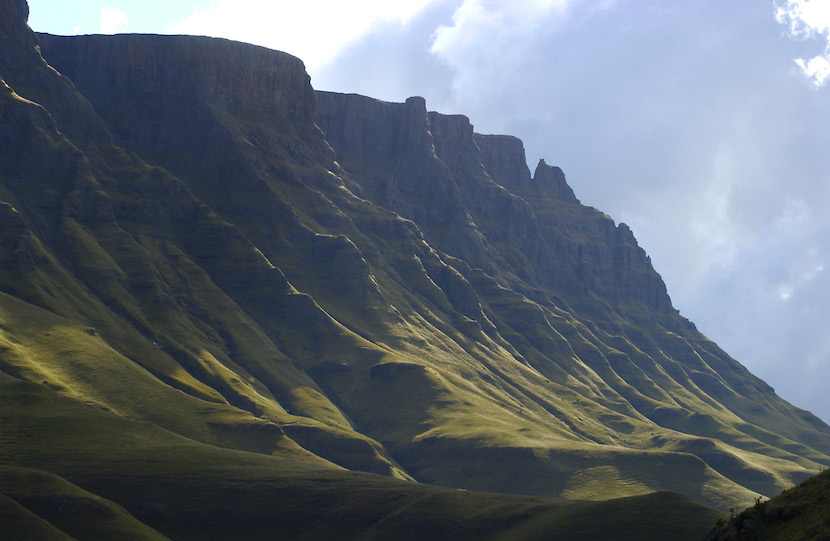 Lawlessness seeps gradually into a society, then suddenly. Hence the broken windows theory of law enforcement which urges society to focus on little illegalities to ensure bigger ones are prevented at source. A useful local equivalent of “broken windows” is traffic lights which are becoming little more than suggestions: the red light means go, especially if there is no other car in view. Little wonder there is more than 10 times the likelihood of dying on the roads here than in the First World. As lawlessness spreads, sanctuaries, too, are lost. Now KZN’s magnificent Drakensberg appears to be under threat, witness this story of three men attacked for tents and provisions by knobkierie-wielding robbers and their dogs. The only upside to this story is that the hikers were grown men who were able to defend themselves. To a point anyway. – Alec Hogg

Durban – Three KwaZulu-Natal men were viciously attacked by assailants with dogs while visiting the Drakensberg.

One of the men was seriously injured.

Scottburgh resident, Jody Main-Baillie, along with his long time hiking partners, Cameron McLean and David Moldenhauer, had planned an extensive hike through the Grand Traverse – a journey that was meant to take them from the Southern to Northern Drakensberg.

Instead, one day into the journey, the trio were attacked with stones, beaten and also mauled by dogs during their first night camping last week.

Speaking to News24 on Thursday, Main-Baillie said the trio had hiked from 06:00 and began setting up camp at 16:00, before sunset.

“We had all gone into our tents at 23:00. Myself and Cameron were in one tent and David was in the other with our gear. Around 01:00 rocks were being thrown at our tent. David began screaming that we were being shot at. That is how hard they were throwing the rocks.

“They kept throwing rocks. We could see them outside the tents. Every time we tried to get up they attacked us with knobkerries. We decided we had to attack them. I was mauled by a dog and sustained a bite on my back. We used pepper spray and grabbed whatever we could and ran.”

Main-Baillie said the assailants demanded money. “During the commotion we screamed and asked what they wanted. One of them said money.”

Read also: Why getting mountain ‘high’ could be a good way to prevent obesity

Main-Baillie said Moldenhauer sustained serious head injuries during the ordeal. “He had to go in for surgery and now has a metal plate in his head. He also broke his hand and two fingers. I also had my shin spilt open.”

Hid in a cave

Main-Baillie said while running, they could still hear the dogs barking.

“It was scary. We did not know if they were still coming after us or not. We managed to find a little cave where we hid till the morning.”

Main-Baillie said it was the first time in his many years of visiting the area that they were attacked.

“Nothing like this ever happened to us before. The manager for the National Park said they closed that section down and are having meetings to sort it out. It is just really sad that something like this happened in such a remote place.

“We come from the city life and you expect to lose yourself in the serene safety of nature and something like this happens. It takes away the freedom of our experience. We will not be going there for a while to come.”

KZN Ezemvelo Wildlife spokesperson, Musa Mntambo, confirmed the incident saying the matter had been handed over to police. – News24