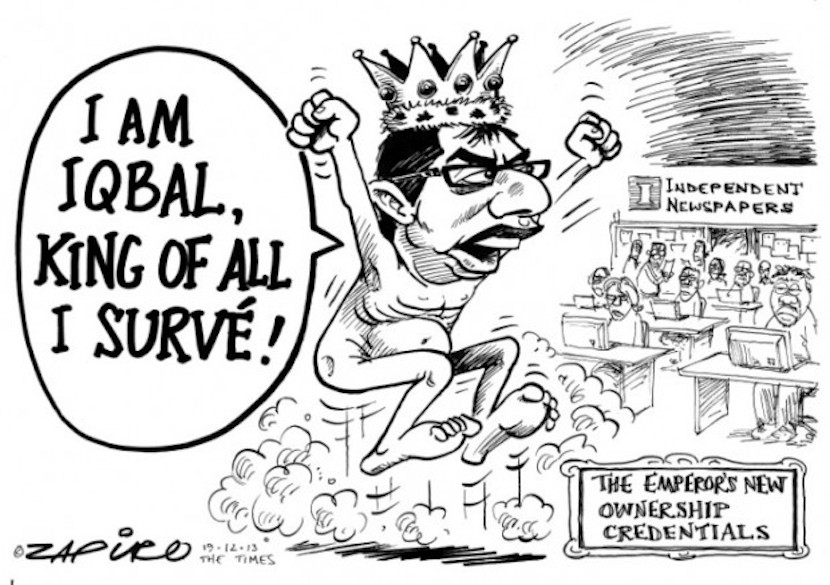 To describe Iqbal Survé as an emotional being would be an understatement. But being emotional is rarely a good personality trait when combined with self-absorption. Especially when you have a powerful media organisation at your beck and call. Survé enjoys this dubious privilege after convincing the PIC and Chinese investors to support his injudicious purchase of South Africa’s Independent Newspapers at double its market value. Since then, Survé’s ignorance of the media business has weighed against him, with his successive misjudgements attracting considerable criticism. And as the savings of pensioners is at risk through the PIC’s unserviced billion rand loan, digging by other media outlets is very clearly in the public interest. Latest was in the Financial Mail whose Ann Crotty unpacked Survé’s apparent scheme to hive a profitable division out of the debt-burdened rump. Survé responded by firing off a series of legal threats, including three targeting Biznews. We’ve had another look at Crotty’s report and for as long as the FM is not retracting a word of it, neither will we. Read our coverage of this saga by clicking here. No need to rush though. Despite Survé’s legal demands, this article is not about to disappear into the ether. – Alec Hogg

FROM SELWYN HOCKEY OF WEBBER WENTZEL

1. We confirm that we act for:

2. We refer to the article written by Donwald Pressly, published on Biznews and Cape Messenger, titled “Why did Iqbal Surve queen bee treat SA to a bizarre fake news rant? Pressly unpicks the details” and dated 6 March 2017 (“the Pressly article”). The Pressly publication served to repeat the contents of an article written by Ann Crotty which was published in the Financial Mail and BusinessLIVE, titled “Breaking the News: Is Iqbal stripping Independent’s assets?” and dated 23 February 2017 (“the impugning article”).

4. The Pressly article serves to repeat the untrue and defamatory statements contained in the impugning article and accordingly constitutes a repetition of our clients’ defamation.

5.1 The Pressly article repeats the untrue and defamatory statements contained in the impugning article which suggests to a reader that Dr Surve, as Chairman of Independent Media, has personally orchestrated a restructuring of Independent Media and the sale of its assets, to the detriment of other stakeholders of Independent Media and for his own personal gain. The reader is led to believe that the decisions which are taken within Independent Media are firstly, solely that of Dr Surve, and secondly, devoid of any legitimate business rationale. These statements will leave an impression in the mind of a reader that our client is an unscrupulous businessman who will not act in the best interest of a company within which he operates and therefore results in our client’s credibility being questioned. Our client is a businessman of international rapport, and any such impression or question regarding credibility causes significant impairment and harm to our client’s reputation. The impugning article furthermore suggests, as is repeated in the Pressly article, to readers that Dr Surve has wilfully placed government employees in a vulnerable position with regards to their pensions, which has an immediate and profound negative impact on the public perception of our client. In this regard, our client’s reputation has been significantly impaired.

5.2 The Pressly article repeats the allegations and innuendo contained in the impugning article that Independent Media is not a profitable company, with one or few profitable newspaper divisions, and has diminished in stature (by asserting that our client was once, implying no longer, formidable). Our client is particularly aggrieved at these statements as profitability is the cornerstone of any business and therefore plays a pivotal role in establishing the reputation of any business. An innuendo of this nature will therefore have an immediate negative impact on our client’s reputation. The innuendo suggests to readers operating or interested in the financial and business sector that our client is failing as a business. The innuendo will be evident to our client’s current investors and business partners. It will also serve to deter any potential investor or business partner from expressing interest in entering into deals with our client. Having regard to the fact that our client attracts international investment, the monetary damages which our client will suffer as a result will be exponential.

5.3 The Pressly article repeats the statements made in the impugning article that Independent Media has sold assets to an entity called Africa Media Group, which is owned by Sekunjalo. Our clients have no knowledge of the existence of this entity and all references to this entity hold no truth by virtue of it being non-existent. In any event, the impugning article states that Independent Media has entered into deals with this non-existent entity to the detriment of its shareholders and other stakeholders. This suggests to readers that Independent Media would and has entered into deals without there being an underlying legitimate business rationale for such deals, and that it will not act in the best interest of its stakeholders. This will cause disrepute and distrust between Independent Media’s stakeholders, including management and shareholders, and will inevitably lead to our client suffering financial loss. These statements, both in original and repeated form, have the effect of and will furthermore lead to the general public being distrustful and doubtful of Independent Media and its actions going forward. This causes significant harm to our client’s reputation and results in our client suffering financial loss, as our client operates in the media sector and therefore the prevailing public perception of our client directly impacts its business operations.

5.4 The statements referred to in paragraph 5.3 above contain innuendo that Dr Surve and/or Sekunjalo is involved in the “stripping” of Independent Media’s assets, to the detriment of Independent Media’s other stakeholders. Having regard to the fact that Sekunjalo holds several portfolios, is widely regarded both nationally and internationally as a successful company, and regularly conducts business deals with international parties, any suggestion that it will act to the detriment of its fellow business partners severely impairs its business reputation. As a result, Sekunjalo will suffer substantial financial loss.

6. The continued availability of the Pressly article on public platforms will serve to further impair and damage our clients’ reputations and should be removed immediately. Failure so to act will aggravate the harm caused to our clients.

7. In the circumstances, we are instructed to demand, as we hereby do, the immediate removal and retraction of the Pressly article, the publication of an unconditional, prominent and appropriate public apology (in terms agreed to by our client), which should be published in Biznews and Cape Messenger within 3 business days from the date of this letter.

8. We are furthermore instructed to demand that Mr Pressly, Cape Messenger and Biznews cease and desist its continuous publications of defamatory articles pertaining to our clients.

9. In the event of our clients’ demand not being met adequately, timeously or at all, our clients will pursue legal recourse to the full extent permitted by law, including the institution of High Court proceedings for a claim for damages, which will be substantial.

10. All of our clients’ rights are expressly reserved.