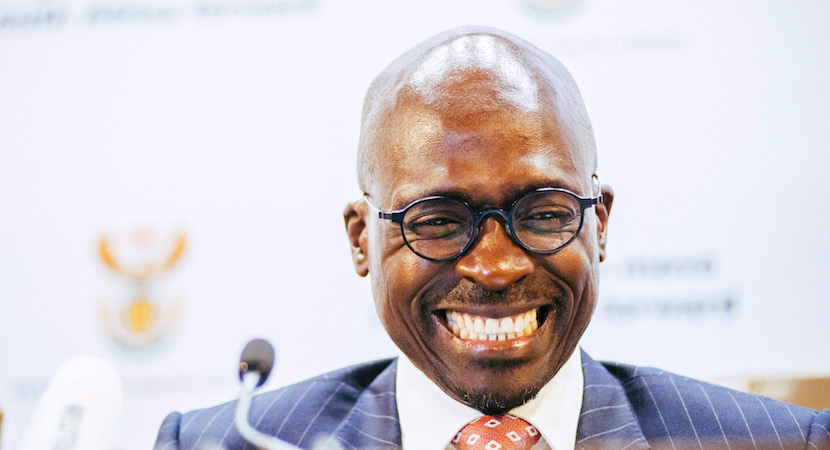 At the Biznews Club London event last night, guest speaker Bernard Swanepoel described fellow mining entrepreneur Brett Kebble as “the original Gupta”. With all the revisionist noise, the corrupting role of SA’s white collar super-thief is often forgotten. It shouldn’t be. Kebble stole Randgold Resources shares owned by a JSE-listed company over which he exercised management control but did not own – and sold them by the millions to fund SA’s original corrupt network of ANC cadre patronage. Like the pettiest of thieves, Kebble was probably intending to buy back and “replace” those shares from the proceeds of Gupta-like plundering of SA’s national resources. But he got squeezed between the JSE regulations that require audited annual reporting, questioning shareholders (take a bow, Allan Gray) and a surging Randgold Resources share price (you too, CEO Mark Bristow). Eventually Kebble as so deeply compromised he engineered his own suicide. At his funeral, pall bearers were drawn from ANC Youth League; and those who attended were warned by a party leader not to breathe a word about Brett’s “business” with them. Only snippets of Kebble’s corrupting activities have thus emerged. But an important name in the current context, is SA’s high living new Minister of Finance Malusi Gigaba, the pilot fish who moved on to much bigger sharks, freely admitting his regular visits to the Gupta Saxonwold Shebeen. The inimitable Ed Herbst rakes over some very touchy areas – but lightens the read with a few chuckles. Thankfully, because it you can’t laugh at the breathtaking audacity of the corruption, it all becomes overwhelming. – Alec Hogg

A small curiosity: on 30 March 2004, after receiving R80 000 from Kebble, Ncwana paid R20,000 to Malusi Gigaba, an ANCYL executive member who, two months later, became deputy minister of home affairs. Maybe the deputy minister ought to tell us – if not Parliament – a bit more about that.

I concur cdes. Let the rand fall and rise and emerge with the masses – Dudu Myeni.

As recent newspaper articles have pointed out, the Zama Zama Zuptoids are absolutely stoked at how the rand has tanked since Malusi Gigaba replaced Pravin Gordhan as finance minister.

And rightly so – there is money to be made and snouting to be done and, it seems, lots of potential for insider trading. These comforting thoughts – if you are part of the inner circle – speak to the continuity of the Tsunami of Sleaze and the profits it generates for the few while impoverishing the citizenry and contributing nothing to the common weal.

This will undoubtedly be a stellar ‘Good story to tell’ chapter in The Domesday Book of Snouting.

What is particularly frightening though, if you are not a Big Vegetable  and don’t have a foreign passport, is the calibre of the revolutionary comrades that the ANC considers its brightest and best, people like Oros for example.

Then there is our new motor-mouth minister of police, Razzmatazz who, in his hubris and inept braggadocio as minister of sport, saw hundreds of millions of rands in wasteful expenditure being incurred in the failed bid for the 2022 Commonwealth games.

As devoid of gravitas as he is of shame, Fikile Mbalula has flitted obscenely around the world in his obsessive pursuit of selfies with people like Lionel Messi, Floyd Mayweather and sundry rap divas. This while the country’s best sportsmen and women scrabble to find even the most basic funding they need, while development sports facilities around the country fall into decay and while sports administration in general has lapsed into shambolic chaos.

All the while and without spending a cent of his own money, travelling in the most luxurious comfort that gravy planes can provide, all the while staying in the world’s most expensive hotels, all the while manically tweeting inanities which have about as much intellectual content as the latest black hole discovered by MeerKAT.

According to Gareth van Onselen, Mbalula thought it advantageous to spend, in two years, R110 million on award ceremonies featuring himself while the combined Olympic Games budget for three years was R25 million.

And if the prospect of Mbalula as the political custodian of our police is frightening, what are the portents for our new minister of finance, our fourth in the past three years? He must be hoping that his tenure will be longer than the Weekend Special who Zuma  still regards as the best finance minister the post-94 kleptocracy has had.

When, in 2004 as a reporter for SABC TV news, I first had the misfortune to meet Malusi Gigaba I simply wrote him off as a jerk after he claimed he was going to strike a massive blow against child pornography and then took reporters to a perfectly legal warehouse belonging to the Adult World franchise.

His stewardship as public enterprises minister of our state-owned-enterprises was an unholy cockup which will haunt us for years to come and showed, yet again, the innate and enduring truth of the Stephen Mulholland law.

What followed thereafter was every tour guide, B&B owner and travelling parent’s nightmare as his arrogantly imposed visa restrictions caused havoc at airports and wiped billions of rands from our tourism revenue income.

A perusal of his public record shows that Bathabile Dlamini’s admonition about ‘smalanyana skeletons’ was on the money – in so many words and in a manner of speaking.

There was the occasion in 2007 when he bought roses for his former wife with your money and mine.

Then he was sued by an irate husband who he had cuckolded.

He was a guest at the notorious Gupta wedding and, as Liesl Peyper of Fin 24 discovered, he has been accepting gifts from the Guptas and various Russian entities for years

He was also invited to the Gupta family’s Diwali celebrations and, as the Mail & Guardian put it on 7 April:

In Indian tradition, not just anyone is invited to Diwali, unless they are seen as close family friends. Gigaba will have to do better when explaining his relationship with an influential family that has benefited financially from state-owned entities such as Transnet, Eskom and Denel that fell under Gigaba’s ambit when he was public enterprises minister.

Like Mbalula, Gigaba fancies a bit on the side but, as Sunil Shah pointed out, if you are legitimately earning around a million rand a year as a member of parliament, where do you find almost a third of that to be a blesser?

Is the answer not that, as noseweek revealed back in 2006 with details of a laundered 18 grand from Brett Kebble ending up in his bank account, he was bought and paid for more than a decade ago? He needs, as noseweek pointed out in 2006, to explain this deposit – did Kebble, as a corrupt purchaser of political influence, want Gigaba to be the beneficiary or was he in the habit of distributing substantial splodges of wonga to the ANCYL to distribute as they saw fit?

Anyone who thinks Luthuli House is troubled by the coming No Confidence debate in parliament and that staff have swapped bespoke suits, designer couture, tailored Madiba shirts and Louboutin shoes for sackcloth and ashes and bare feet hasn’t read the unequivocal statement by that resolute champion of individual freedoms, Uncle Gweezy:

“What do you think the ANC is, Father Christmas? I don’t know where this notion comes from that we are a collection of individuals who have conscience. We are members of ANC in a party political system.”

No, the truth about what’s troubling the staffers at Loot-freely House is startlingly different and remember, you are reading it here first.

I call my informers in the ANC’s inner circle ‘Browse Moles’ because they work in the dark and are at home in dank environments. When exposed they tend to end up, like their subterranean mammal counterparts, floating face down in a swimming pool and manifesting as much joie de vivre as Monty Python’s ‘Pining for the fjords’ parrot.

My Browse Moles tell me that what has really caught the ANC’s NEC on the back foot and scrambling for answers is a sudden and intense clamour for the Scipio Griffin to be made available to the top-ranking tenderpreneurs, compradors, assorted rent seekers and bottom feeders of the Hyena State to use as everyday transport. This will require enabling legislation to be passed that will declassify the Griffin as a military vehicle.

The Guptas will have you know that nothing has confirmed Donald Trump’s contention that the media is the enemy of the people – the important ones that is – more than Erika Gibson’s article in Rapport which exposed the fact that Number One’s blessers have acquired a new set of getaway wheels. This exposé resulted in the Griffin ignominiously leaving the Gupta compound in the witching hour on the back of a flatbed truck.

Although it is not exactly ‘lang en slap’ everyone suddenly wants a Scipio Griffin.

My Browse Moles tell me that, aside from its exclusivity, the Griffin has numerous Grosse légume advantages:

It’s not just the ANC mandarins that have been caught by surprise, it’s the Blessers as well. Their Babes are demanding their own Scipio Griffins like now but with suitable bling. At this very moment the technologists at our leading paint companies are working feverishly to meet the demand for a new generation of Kandy-Kolored Tangerine-Flake Streamline Babies in vibrant, holographic colours.

Among the Blesser Babes the favourite colour seems to be a sensual coffee shade called ‘Boity’s Booty’ and younger ANC MPs seem to favour ‘Bloody Mary Sunset’ inspired by the 420 eye colour of our Intellectual Lecher.

While I find myself increasingly pre-occupied by the words of that most beautiful of hymns – Change and decay in all around I see … I am nevertheless gratified by the declaration by Number 1’s nyatsis that they are finding the way in which our economy is going arse over tip to be an absolute hoot.

Only one thought will dampen the exultation of the celebrants at the Saxonwold Shebeen – their sadness about the fact that Brett Kebble is no longer around to witness the upward mobility of the “Roar Young Lions Roar!” who he so generously, if clandestinely, financed a decade ago.