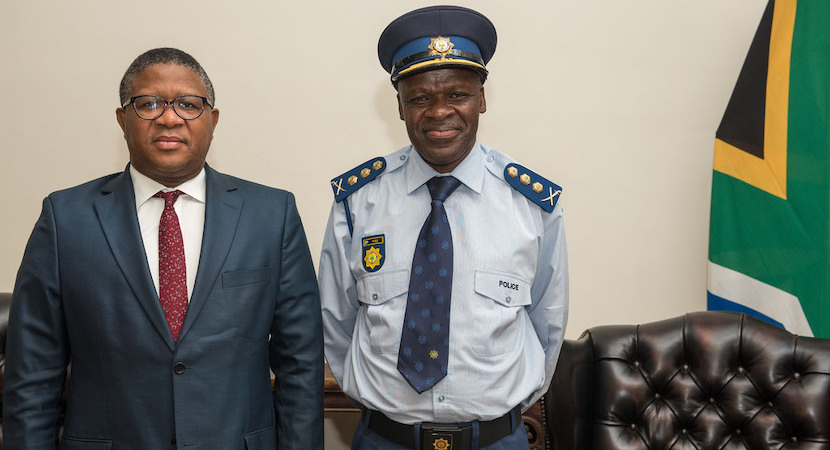 JOHANNESBURG — A potentially major development could take place if and when documents pertaining to an alleged ANC vote-buying scandal are declassified by police. This comes amid Tshwane’s North Gauteng High Court having ordered a magistrate to hand over records used to issue subpoenas against National Police Commissioner Khehla Sitole and two deputies. The subpoenas were linked to an IPID investigation. To take a step back from this complex story, the chief allegation here is that individuals close to former President Jacob Zuma tried to launder R45m through SAPS to buy votes ahead of the 2017 ANC elective conference. In this story below, Daily Maverick’s Marianne Thamm provides the latest update. – Gareth van Zyl

IPID’s investigation into an alleged attempt by SAPS and CI top brass, as well as former Minister of Police, Fikile Mbalula’s adviser, Bo Mbindwane, to siphon off funds from the SAPS Crime Intelligence budget prior to the ANC’s 2017 Nasrec elective conference to buy votes, will not be affected by a Pretoria High Court order on Thursday for the records to be handed over to National Commissioner Khehla Sitole.

The subpoenas were for those implicated to explain to IPID their presence at a meeting at a Pretoria hotel with Durban businessman and SAPS supplier Inbanathan Kistiah and his company Brainwave, trading as iView three days before the ANC’s elective conference at Nasrec in 2017 where Cyril Ramaphosa won by a slim margin.

The top cops, as well as Mbindwane, have claimed, through their legal representatives, that the documents are “classified” as they relate to national security.

However, IPID director, Robert McBride, as well as the Inspector General for Intelligence, Setlhomamaru Dintwe, are of the opinion that the classification is an alleged attempt to cover up possible criminality. Dintwe has written to Minister of Police, Bheki Cele, saying the issue pertains to SAPS procurement matters and not national security.

Sitole, Ncgobo, Mbindwane, Tsumane and Vuma have claimed that the information can only be requested and disclosed to parliament’s closed joint standing committee on intelligence.

IPID’s court papers claim that that the meeting with Kistiah, owner of Brainwave projects 1323CC, Trading as I-View Integrated systems, was an attempt to illegally procure an eavesdropping device, commonly known as a “grabber”, at the inflated price of R45m in order to launder money to a faction in the ruling party who would attend the ANC’s Nasrec conference. The grabber usually sells for R7m.

Read also: State capture beyond the Guptas: How SITA, SAPS were totally compromised

On Thursday Sitole said that he had made an application to the High Court “to compel the magistrate to hand over the ‘records’ and this was granted yesterday. The National Commissioner, in welcoming this order, has also embraced the fairness of the Justice processes.”

While Sitole might view Thursday’s ruling as a “victory” the fact is he, as well as the others implicated, have always been entitled access the documents. The ruling will not, said IPID, affect its ongoing attempt to have the documents declassified.

The alleged procurement, from iView – which was under business rescue at the time and not listed as a SAPS supplier on government’s database also did not go out to tender. The attempt to procure the R45m grabber was scuppered when IPID had been tipped off. Sitole then cancelled the transaction.

McBride, in his counter-application also claimed that CI had paid iView R33m for a software encryption application, Daedalus, to monitor social media sites during the 2016 #FeesMustFall student protests.

This was not the first time SAPS had done business with Kistiah.

In 2016 the company also bagged a R6.7m deal for the supply of 200 light-weight bullet-proof vests at the cost of R33,402 per vest from an India-based supplier MKU. The vests cost between R7,000 and R8,000 locally. The contract was awarded to Kistiah without going out to tender. Kistiah imported the vests from India and reportedly received a R2.35m cut.

Meanwhile, Daily Maverick has learned that CI has instituted disciplinary proceedings against a Brigadier suspected of being the whistleblower who had tipped off IPID about the attempted R45m grabber procurement.

The Brigadier, whose name is known to Daily Maverick, is now facing an internal disciplinary hearing on several charges of misconduct including allegedly refusing to shake the hand of Major-General Obed Nemutanzhela, head of CI’s slush fund.

The incident is alleged to have taken place on 11 December 2018 at the Pretoria Commercial Crimes Court where the Brigadier is accused of acting in a “disgraceful manner” saying “don’t shake that thing’s hand” when referring to Nemutanzhela.

In 2017 IPID investigated Nemutanzhela for his alleged procurement of blinds at the cost of R500,000 awarded to a company that did not exist.

“It is alleged that on or about January 2013, and February of the same year, two requests for procurement of blinds and curtains were submitted and authorised respectively.”

“The investigation uncovered that neither Umvuzo Wethu Promotions nor Siboniseng Construction installed the blinds and curtains as per their approved quotations,” the IPID letter read.

The truth of the matter was that it was a company called Industrial Corporation CC, trading as Panda Blinds, which had actually done the job.

The CI Brigadier under investigation is accused of “flipping the middle finger” at Nemutanzhela as well as allegedly making threats to Brigadier Chan Goolam (appointed as head of the CI Internal Audit in 2005), a Major-General Moodley and a Brigadier Lombard.

Brigadier S Hansraj, attached to the office of the Provincial Head of Crime Intelligence in the Western Cape, Mzwandile Tiyo, is heading the disciplinary against the Brigadier.

Tiyo’s name surfaced in the January 2018 court appearance of Cape Town underworld figure Nafiz Modack as one of several top cops whom he claimed he could call on for protection.

In that instance, Colonel Charl Kinnear, the investigating officer in several high-profile cases related to the deadly gang war for Cape Town’s night time economy, told the court that a recording existed of a meeting that took place in May 2017 in which Modack had claimed that Tiyo was an ally.

“Nafiz Modack states he was dealing with high-ranking police officials and, should there ever be a problem, Tiyo and Mbotho can sort it out,” Kinnear told the court.

Major General Patrick Mbotho, deputy provincial commissioner of detectives in the Western Cape was later suspended after posting an explicit video on a SAPS WhatsApp Group but was recently appointed as the Provincial Head of the DPCI in the North West.

Responding to a query from Daily Maverick DPCI spokesperson, Brigadier Hangwani Mulaudzi said Mbotho had been “shortlisted, interviewed and went through the assessment selection process. His background was thoroughly checked including any outstanding criminal and departmental investigations. There was none.”

Mulaudzi added that Mbotho had been “already sanctioned for the Western Cape incident” and that he had “a valid Top Secret security clearance. His appointment was approved by Cabinet last month together with that of Major General Kubandran Moodley in the Free State and their appointments became effective on 01 December 2018.”

In December Arendse wrote to Minister of Police, Bheki Cele, that he had been “reliably informed that after an internal disciplinary hearing, General Mbotho was served with a suspended dismissal by SAPS”.

He had subsequently learned that Mbotho had been appointed as head of the HAWKS in the North West, home turf of former ANC chair, Supra Mahumapelo.

“Given that there are still criminal charges pending against General Mbotho vis-à-vis my complaint in addition to other charges and, given the fact that there were other more suitably qualified candidates for the post in the North West, I hereby place on record my sheer revulsion with the decision to elevate this delinquent to such a sensitive post.”

Arendse told Cele that “as a registered taxpayer, I demand that the appointment be reversed immediately and he be placed on administrative duties at Head Office in Pretoria until all outstanding matters and investigations against General Mbotho have been finalised.”

Mulaudzi’s response to this was “if there is any investigation that has not been reported to the authorities, the process should continue unhindered. Should the conclusion reveal any prima facie wrongdoing, we shall not hesitate to take the necessary remedial steps.”

Regardless of Thursday’s High Court ruling, IPID has said it would continue its year-long battle to have the documents regarding the Pretoria meeting declassified. DM