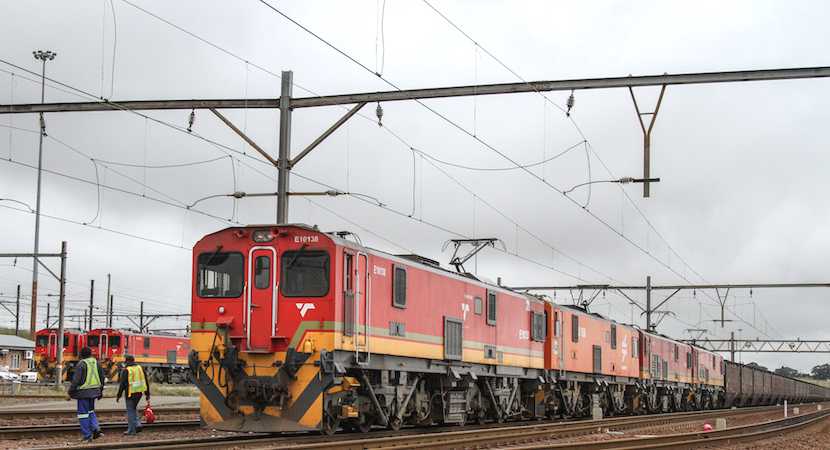 CAPE TOWN — The Zondo Commission continues to prove the old adage that “truth is stranger than fiction.” You just can’t make this stuff up. The latest chapter in the book we’ll call Zondo’s Days is aptly titled, the Great Train Robbery. Penned by various highly credible witnesses this week, it describes how the train driver, conductor, ticket-inspector and tapiologist conspired with a cowboy posse to hi-jack the whole shebang. It was a record haul, in fact various posses boarded the Transnet train along the entire journey, escaping with literally billions. One Gupta-linked guy who flipped the train-track switch to turn it down a canyon filled with more crooks, was paid R3bn for his trouble. Not a bad day’s work. Just a matter of being at the right junction at the right time – and knowing the right outlaws. The good news is that the train crew has been sacked and Transnet is back in the driver’s cab, the passenger trucks filled with sheriffs helping hunt down the culprits. Story first published on the Daily Maverick. – Chris Bateman

The dirty deals at Transnet run into billions of rands and the State Capture mop-up is not going to be cheap, but with thousands of fresh allegations still being unearthed, the mess simply has to be cleaned up.

Civil claims have been instituted against former executives and private companies that scored off questionable deals while some of those suits have seen their pensions frozen as Transnet sets about recovering some of the money allegedly unlawfully dispensed.

A new board under chairperson Popo Molefe arrived just in time in 2018 to pull the parastatal back from the edge of a cliff that held frightening implications for the country’s economy and the fiscus.

Molefe confirmed this during his testimony before Deputy Chief Justice Raymond Zondo on Tuesday afternoon when he said the board virtually had to beg lenders not to pull the trigger by calling up loans in the wake of a qualified audit in 2018 that related to irregular expenditure of just above R8bn, much of it historical.

“The auditors were unable to obtain sufficient appropriate audit evidence that the irregular expenditure was complete and accurate due to the lack of implementation and monitoring of existing controls to identify and report it,” Transnet stated in a Stock Exchange News Service announcement on August 21 2018.

In addition to several controversial deals such as the R54bn acquisition of 1,064 locomotives and sky-high consulting contracts involving the likes of McKinsey & Co, Regiments Capital and its offshoot, Trillian Capital Partners, a string of other high-value deals is also being investigated to identify those responsible and bring them to book.

At the heart of Transnet’s mess sits one of the most expensive dirty deals the country has seen – the acquisition of 1,064 locomotives bought from four international suppliers, one of which is accused of paying a 21% kickback to Gupta kingpin Salim Essa.

At last check, Essa had raked in a neat R3bn for his “trouble”, Molefe said.

Such was the “unimaginable arrogance” of those involved in swinging part of the lucrative locomotive deal to China South Rail that Essa allegedly walked away with this money simply for having facilitated the deal.

Transnet has now begun the process hunting down in excess of R16bn allegedly dispensed through the alleged irregular or unlawful conduct of a string of executives, among them various Gupta acolytes.

Former executives including Brian Molefe, Anoj Singh, Siyabonga Gama, Edward Thomas, Gary Pita and Phetolo Ramosebudi have each been slapped with civil claims running into hundreds of millions of rands over funds that landed up in the coffers of, among other financial advisory firms, Regiments and Trillian.

The two firms, which are deeply implicated in the State Capture scandal, are also being sued.

And Transnet is negotiating with some of the locomotive suppliers and has thus far recovered just above R600m from China South Rail with another R20m also being pursued.

Molefe gave the commission a broad overview of tainted deals and action initiated by the new board that includes disciplinary action and it having frozen the pension payouts of among others, Gama and Ramosebudi. The Special Investigating Unit is also investigating some of the deals.

Molefe’s testimony was followed on Thursday by Transnet’s governance executive, Peter Volmink, who detailed Transnet’s supply chain processes, gaps in the system while also highlighting deviations from due process that allowed some former Transnet executives to single-handedly sign off on those big money deals.

The government-owned freight and logistics company has a capital base of R380bn and is the custodian of the railways, ports and pipeline networks that connect a multitude of industry for the import and export of goods and commodities.

Volmink, a former deputy director of public prosecutions at the Asset Forfeiture Unit of the National Prosecuting Authority, first joined Transnet in 2007 as the GM for legal services. He later moved to his current position as executive manager of governance.

He told the State Capture commission that Transnet operated within a pyramid of various legal and regulatory requirements, including section 17 of the Constitution, the Public Finance Management Act, the Preferential Procurement Policy Framework Act and the BEE Act, among others, through to government policy and guidelines and then, its own internal procurement procedures.

These are all designed to drive greater fiscal discipline, promote legality, objectivity, uniformity and transparency in the awarding of contracts.

Instead, Volmink said, over the past few years those in charge at Transnet violated due process, in some cases bullying staff to do push through deals:

‘We have seen the most spectacular breaches of governance have taken place at exco and board level’.

Volmink is testifying about various types of governance breaches, including a practice of “multiple repetitive” contracts awarded to the same supplier over and over without there being clarity about why the company in question was chosen.

When such deals are awarded under confinement – outside normal tender process – it becomes a red flag and the appointment of McKinsey illustrated this, he said.

Volmink is set to elaborate on McKinsey’s good fortune at Transnet on Friday, but has thus far stated that the company had had some eight deals through confinement of roughly R1.8bn from Transnet.

McKinsey has already repaid close to R1bn to Eskom after a different tainted deal at the power utility.

“With certain of the McKinsey contracts, letters of award were issued when tender processes were still under way. That takes the McKinsey case to a whole different level of seriousness,” Volmink said.

Volmink described how former Group CEO Brian Molefe had simply disregarded an entire supply chain process to overturn the awarding of a system network contract to Neotel when he summarily announced a decision to hand the deal to a different company, T-Systems, instead.

In that deal, T-Systems had scored the lowest out of three final bidders, but slipped in a R248m price cut, significantly, after the process had been concluded.

None of the other bidders was asked to better their prices and Molefe, Volmink said, did not think this was necessary.

Molefe was later forced to reverse the decision when legal and audit opinion proved to be a stumbling block.

Neotel would soon land another tender, this time on confinement, for a CCTV camera system at the some of the country’s ports.

The amaBhungane Centre for Investigative Journalism previously exposed Neotel following a kickback scandal over its Transnet deals – revealing how cash had landed up with a Gupta-linked letterbox company named Homix.

The grounds for confining the CCTV camera tender was, ostensibly, compatibility, as the company was already running the network system under the earlier contract that had been snatched back from T-Systems.

As for other reasons given for why it had to be awarded outside of due process, Volmink says he simply didn’t buy it.

Those included that the Transnet’s Port Authority could be found non-compliant with international security requirements and faced blacklisting by US authorities.

“It occurred to me that this is not something one suddenly realises (to warrant an emergency).

And, the third reason, probably the weakest, said Volmink, was some weird reference to “remediate fruitless and wasteful expenditure” that had previously occurred.

While Volmink would not speculate about motives, he was adamant that the deals represented instances the rules were bent, possibly for nefarious reasons.