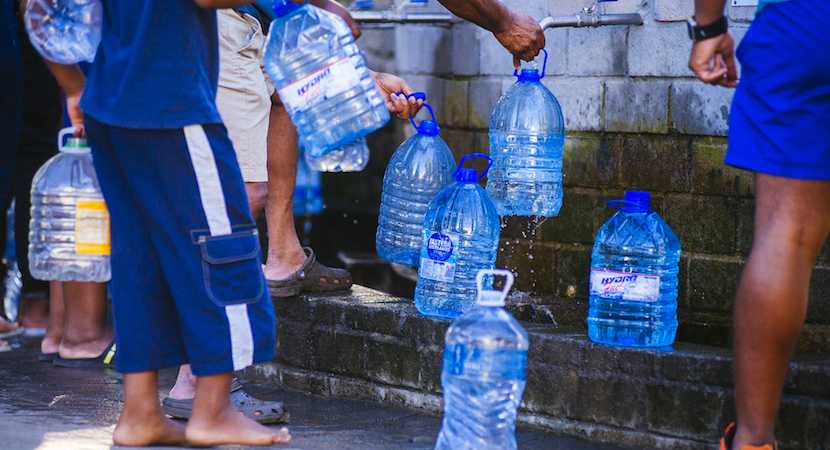 CAPE TOWN — In my reporting career I’ve noticed a strong tendency by national, provincial and local governments to claim credit for the achievements of sterling NGOs without whom millions more South Africans would endure far greater hardship. This story is slightly different, but the bureaucrats come hellishly close in what appears to be blatant cynicism and/or cronyism. Granted, after pleading for help the Department of Water and Sanitation, did credit South Africa’s only home-grown relief organisation, Gift of the Givers, with resolving and quantifying Makhanda’s water crisis. But instead of paying the millions owed for work done, (and which the DWS woefully underestimated), they directed their millions in national disaster funds to Makhanda businesses. In other words, Gift of the Givers spent R15m in drilling boreholes and trucking in water, only to see their faithfully promised recompense flow elsewhere. The DWS then sank to the bottom of the cesspit, demanding that the relief organisation move their water trucks out because, “there’s no water crisis here”. Gift of the Givers withdrew on principle; lock stock and water barrel. It’s a parody of arcane bureaucracy which, in the absence of a cogent explanation, is best described as execrable. No amount of hijacked water can sanitise that. – Chris Bateman

Gift Of The Givers media statement:

“We have been inundated by calls from the media to confirm if we are withdrawing from Makhanda. The answer is “Yes”. There has been no disagreement with the Makhanda Municipality, they have been excellent. The municipality, university, the multicultural community, political parties, SAPS, B&B establishments, learners, tourists and students gave us the most memorable reception that anyone could ever have dreamt of.

On 9 February the municipality requested our assistance and said in five days everything will be back on line in terms of water supply. Gift of the Givers intervened on 12 February and explained to the municipality the extent of the problem was far greater than anyone envisaged. We drew up a rescue plan and commenced the process of “saving the city” immediately. We advised the municipality that the cost to solve the problem will be in the region of R23m and that this will require government funding. They said the area has been declared a disaster in the government gazette and they will receive emergency funding with which they will remunerate Gift of the Givers. They were honest, were not sure how much they would receive and when they would receive it. We said it’s fine, their word was good enough for us. We were told that at a council meeting in March it was a unanimous decision that Gift of the Givers will be funded the moment the funds arrive.

Gift of the Givers brought in specialist hydrologist, Dr Gideon Groenewald, to site and drill boreholes in an area where the geology is very difficult and finding water a big challenge. He was successful in 3 hours with the first borehole. We successfully drilled 15 boreholes, tested the water which is a huge cost, brought in special filtration systems designed by us, delivered bottled water, water by truck and did everything possible to assist the community as that was the priority. In all this time we had not received a single cent from any government institution. The costs were rising daily. Thus far the intervention has cost us R15m. The Department of Water and Sanitation (DSW) started engaging us. We’ve had, without exaggeration, more than 50 hours of meetings, 13 weeks have passed, the town is in crisis (we were called in on every occasion to quell unrest related to provision of water) and government is still having meetings, preparing business plans, filling in forms and God knows what, a typical case of Nero fiddles whilst Rome burns. But the best came from DSW on Freedom Day, when President Cyril Ramaphosa, was addressing the nation. They told us to move our trucks as there is no water crisis in Makhanda. Ironically, the president mentioned in his speech that there can be no freedom if there is no water in Makhanda.

This week we received the most incredible feedback from DWS. They said only companies from Grahamstown can be paid for the drought intervention so accordingly, a private consultancy will be paid R1.2m for work related to boreholes (we did the consultancy work, drew up a plan to save the city and sited the boreholes), another company will be paid R7m for boreholes (which we drilled) and a third company will be paid R1.9m for electrical work to connect boreholes which we drilled at Waainek (and which we have not be compensated for) to the treatment plant. This is R10m of taxpayers money handed out freely by the government to people as remuneration for work that Gift of the Givers did. Our hearts are with the people of Makhanda, the elderly, the women and children and everyone who waited so patiently for water but as a matter of principle we cannot continue.