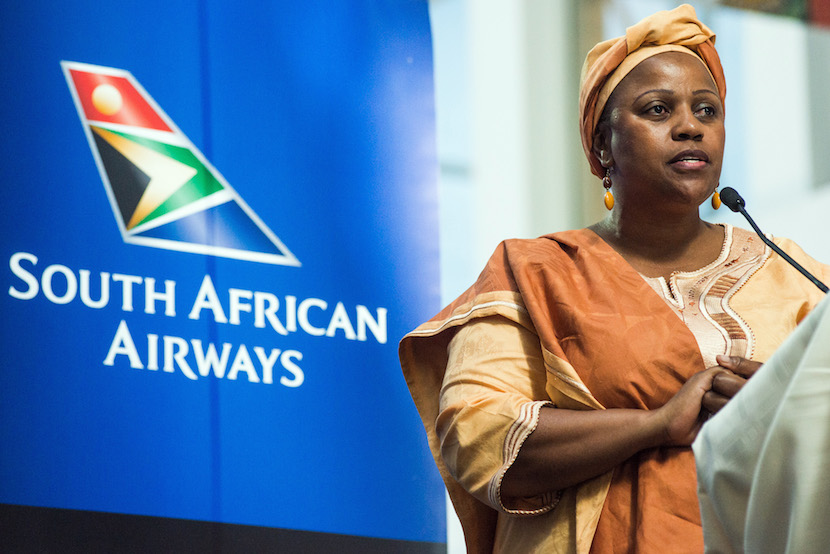 It’s better than a block-buster Hollywood crime thriller, where the hunted becomes the hunter, with more twists and turns that an overgrown game trail. The best the ‘partially-uncaptured’ South African criminal justice system has come up with so far on former bully-girl, intimate-Zuma-associate and airline-wrecker, Dudu Myeni, is to get her declared a Delinquent Director. Given the counter-litigation tide the protagonists had to swim against, this is no small achievement. Yet Ms Myeni has far more to answer for, according to forensic sleuth Paul O’Sullivan, whose open letter to NPA chief, Shamila Batohi, below makes for riveting reading. He was the fox the Zuptoid hunters, led by the then-powerful Myeni, set their State pack upon, ambushing, caging and allegedly torturing him. He wriggled free and is now causing seven different kinds of pain for his former captors, an agony Ms Myeni will do all in her power to avoid, pulling whatever strings are still attached to the Zuptoid machine in the system. O’Sullivan is after the entire Zuptoid pack, feeding juicy evidential bones to a thinly-staffed Batohi. It’s a drama in about its third season, with self-contained episodes and more to come. Tune in for maximum entertainment and dare we hope, political reassurance, before the final season plays out. – Chris Bateman

I hope you are well and coping with the challenges imposed by Covid-19.

I attach a copy of the scathing judgement of Justice RG Tolmay dated 27th May 2020, which is self-explanatory.

I then refer to the case I opened at OR Tambo Airport on 2016-01-14 under OR Tambo CAS 91/01/2016 against Ms Myeni and others wherein I alleged Fraud and Reckless Conduct as a director, in contravention of Section

A copy of the above mentioned docket, wherein I adduce evidence of the fraud perpetrated by her and the collective board of SAA, can be found, with annexes.

On 2016-03-17 I submitted a further sworn statement in respect of the OR Tambo docket, a copy of which is also attached. In this supplemental sworn statement I clearly implicated Mr John Motloba as an additional suspect, along with then president, Jacob Zuma and the company Quartile Capital. I did not publish this sworn statement on our website, so have attached a copy hereto, for your convenience.

It cannot be coincidence that the 2016-03-17 statement set in motion a chain of criminal events, (together with an e-mail I had sent to then acting Commissioner of Police on 2016-03-15) which saw me being unlawfully arrested and dragged off a London bound plane at OR Tambo, along with my then 7 and 9 year old daughters, where after I was subjected to four days of unlawful detention, torture and a subsequent two and a half years of facing trumped up charges of fraud, kidnapping, racketeering and false allegations of treason and terrorism all orchestrated by the unlawfully appointed Gauteng DPCI head Prince Mokotedi. The day after my arrest, which was orchestrated by Major General Prince Mokotedi and his accomplices, the said Mokotedi pinned me up against a wall, whilst my hands were cuffed behind my back and told me, amongst other things; ‘You don’t know how you’ve upset Dudu Myeni’. During the trial on trumped up charges in terms of Section 26B of the South African Citizenship Act, one of Mokotedi’s accomplices admitted that the arrest had been expedited because I had ‘threatened’ the chairman of SAA, Dudu Myeni. It subsequently came to my attention that Mr Nick Linnell (the same person fingered in the 2020-05-27 judgment) was paid by SAA to orchestrate my arrest and he billed SAA hundreds of thousands of Rand for such ‘work’, as can be seen by reading the news item at: https://city-press.news24.com/News/SAAs-R167K-a-month-adviser-20150809

You would be aware that I am currently suing the state as a result of the above unlawful conduct of criminals in the DPCI, Police and NPA who acted with a common purpose with the intention to silence me from exposing corruption. Myeni is also a defendant in that case, along with named police officials and NPA officials.

On 2016-07-03 I submitted a further sworn statement in respect of the OR Tambo docket, a copy of which can be found here. In this further statement I implicated Mngadi and BNP Capital as co-suspects in the frauds being perpetrated by Ms Myeni. I also notified Nedbank’s Forensic Head of Mr Mngadi’s involvement and he was suspended and subsequently dismissed.

Finally, on 2017-12-04, Forensics for Justice opened a further docket against (amongst others) Dudu Myeni, Jacob Zuma, their son Thalente Myeni and Nick Linnell, for their joint and several role, where they all acted with a common purpose in the capture of ESKOM. According to the evidence led by Zola Tsotsi at the Portfolio Committee on Public Enterprises on 2017-11-21, he was ‘persuaded’ to hire Mr Linnell to unlawfully get rid of senior executives at Eskom, paving the way for the criminal ‘capture’ of Eskom. A copy of that docket can be found here. I will seek the case number, which I do not have to hand right now and advise you accordingly.

I went so far as to predict way back in November 2014, that Myeni, if left unchecked would bring SAA to its knees. See attached e-mail to her in November 2014 and a sworn statement I provided to Mr Kalawe in February 2014. See also the mail from a PI hired by one of her accomplices, which makes it clear that Myeni was the puppeteer at SAA.

Also read: Paul O’Sullivan: Gordhan must be SCALPED, with Zuma, Myeni for crooked mess at SAA

Despite opening countless dockets against her and providing copious amounts of prima facie evidence, she has been left to her own devices and ‘allowed’ (or encouraged) to eviscerate a once great airline and put thousands of people out of work, whilst irrevocably damaging the economy of our country.

It therefore pains me to record the following:

I believe sincerely believe that the Tolmay judgement, read together with the trial transcript and documentary evidence submitted by the plaintiffs, will more than adequately supplement and corroborate the evidence I have submitted as outlined above and make it possible for Ms Myeni to be arrested and charged, along with her accomplices, this side of Christmas 2020.

As leader of the NPA, you cannot be expected to prosecute these cases on your own.

As leader of DPCI Lt General Lebeya cannot be expected to investigate and refer cases for prosecution on his own.

NPA and DPCI heads have to rely on subordinates for the above investigations and prosecutions. However, the rot is still ever present in the police, DPCI and NPA, to the extent that to date not a single trial has started or a single conviction has been had from the countless cases, replete with ample prima facie evidence that we have spent many years and millions of Rand putting together. Instead countless millions were wasted on dirty cops hunting for evidence they could nail me with, as well as multiple trials on trumped up charges. If the same level of diligence that has been unlawfully meted out against me had of been applied to the criminals engaged in state capture, they would all be behind bars by now.

I must therefore respectfully request that urgent steps are taken to prosecute some of the many cases we have opened, starting with Myeni, or give us a certificate as envisaged in Section 7 (2) (b) of Act 51 of 1977, the Criminal Procedures Act.

I am confident that I can obtain funding and the requisite skills for private prosecutions, should the need arise.

I look forward to hearing from you soon and pledge my assistance and that of Forensics for Justice if it is needed, in bringing these people to book.

A clear signal MUST be sent out that it is NOT OK to bring state owned companies to their knees, such as was done at SAA, Eskom, PRASA and Transnet.