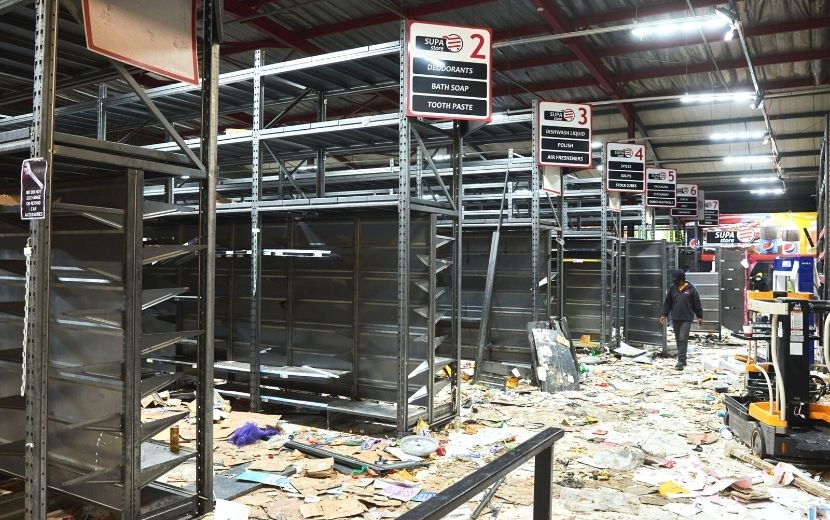 It was during the height of the chaos in KwaZulu-Natal that BizNews last spoke with Melanie Veness, head of the Pietermaritzburg Business Chamber. Frightening for those affected, it now seems as if the worst might be behind for the city and other areas. But what about the cost? Veness told BizNews founder Alec Hogg that so far, the estimated cost to KZN alone is about R20 billion. “Some [business owners] have said they will start up again. Others have said, as soon as they get their payout, they’re taking their money and leaving.” – Jarryd Neves

On the estimated damage that was done during the week of rioting and looting:

We’re still counting our losses here. I think they’ve estimated that in the KZN province, we’re looking at about R20 billion, which is significant. We’re still adding it up. But, if you start adding the numbers up it’s millions and millions. A R150 million here, R210 million there. The list just goes on and on. There’s some still outstanding. Obviously, some of the buildings still need assessing. The stock itself cost a huge amount, but the building damage is significant. It’s still unclear to me why you have to set fire to something you’ve already looted.

On whether business owners in Pietermaritzburg are going to reinvest:

Some of them have said they will start up again. Others have said [that] as soon as they get their payout, they’re taking their money and getting out of here – [and] you can hardly blame them. Some of those businesses have lost absolutely everything, so they will be paid off for all their equipment and buildings. My heart breaks for the employees, because one of the businesses that I’m particularly thinking of, (I was there the morning after the looting) and the employees all braved the crowds and came through to help clean up.

My heart absolutely breaks for both sides of the equation. It was very hurtful because we had a lot of businesses. It wasn’t just that they were looted. They were angrily destroyed. Attempts were made to set them on fire. There was horrible spray paint all over the vehicles that remained [and] all over the walls. There was defecation in building. It was absolutely heartbreaking and horrible. You’ve chosen to take your all and invest it in a place and you come into that.

To a large degree, we were betrayed and deserted by security forces and some of our politicians. You can’t get away from that now. Everybody is coming up now and saying, you know, what a terrible thing. Where was everyone when we needed them?

On the lack of effort to prevent the looting and rioting from happening:

There doesn’t seem to be too many other explanations for it other than complicity. We saw people standing, watching it happening. In fact, there are some that have been caught partaking. There wasn’t any real effort. As I said previously, the excuses given was that there were too many people [and] they were overwhelmed – but there was no attempt to use any form of tear gas – it just didn’t happen. For me, the only answer is that there was complicity and that absolutely destroy’s one.

When you think about what it means – what does it mean for the future of our province? If you’re considering putting your money back here, you’re asking yourself, “if this happens again, will the same thing happen? Will nobody step up and defend my business, my property and my employees livelihoods?” If people employed by the state are not prepared to protect that, then you’re on a hiding to nothing.

On what would have happened if civilians didn’t defend businesses and property:

If they hadn’t done it, the damage would be far more extensive. They had the courage to stand up and protect what they could see would be our future food sources and our local businesses – because that’s our livelihood. What do we do if we’ve got no economy and it’s been totally destroyed? there really was no police or army presence to speak of. In fact, it took so long for the army to get to that even right at the end – when we were supposed to have so many forces on the ground – they were protecting government infrastructure.

It wasn’t as if a massive army group moved in and took control. If it wasn’t for those communities, we would have been in a much worse state. I do understand there was some criticism levelled at some of the roadblocks. There was an undercurrent on social media that, I think, was being driven [with] a racist kind of undertone to what was happening. But on the ground, that was actually not occurring at all. A lot of what was coming out on social media was proven to be untrue. Communities stood together, which is really wonderful to have seen.

There was no such thing, although it was being fuelled on social media. I had a couple of calls to say the Spar is only letting white shoppers [in] which is totally and utterly not true. Bell Pottinger wasn’t that long ago. There’s some really ugly stuff behind this. I think that the public deserved to know the truth of what’s gone on here. It wasn’t poor people that drove this. That makes me even madder, that they had the audacity to do what they’ve done [and] destroy our economy and to take away the livelihoods of decent, ordinary people. It’s unforgivable.