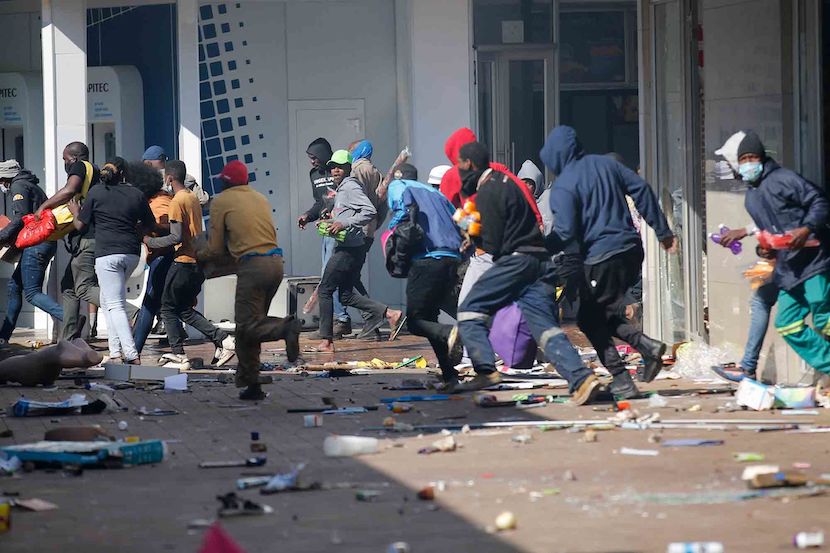 As looting and rioting devastated the Gauteng and KZN provinces, government was taken aback, in shock that something like this could happen. Many have been warning that this was bound to happen, the poor revolting against a system that fights them. In fact, according to Jonathan Katzenellenbogen, civil unrest has been growing steadily since 2008. Despite this, no substantial work has been done to improve state education, create employment or even provide decent housing for the millions of South African’s who go without the bare minimum. “ANC policy is unchanging except for plans to expand the role of the state, whether it be through Expropriation without Compensation or a National Health Insurance scheme,” writes Katzenellenbogen. Even now, two weeks after the violent events, government – who failed to protect thousands of businesses and many more people – is yet to admit they’ve failed the country, harming the economy in the process. “The story government would have preferred from the agencies is of a dozen instigators plotting the violence. It certainly would not like to hear stories that might suggest the people are against us and there is a massive problem of lawlessness.” – Jarryd Neves

The real intelligence failure is a failure to listen

The recent mass violence in Gauteng and KwaZulu-Natal took government by surprise. But despite the surprise, the signs are that it won’t be a wake up call that will bring about decisive changes.

The government is more likely to double down on its agenda rather than take a step back and reconsider. There is nothing in President Cyril Ramaphosa’s speeches to the nation since the explosion to indicate that the ANC will go through a period of self-examination. On Sunday evening we were told of additional relief measures, an expansion of the employment tax incentive, and commitment to the Economic Reconstruction and Recovery Plan, a heavily state-centric plan focused on infrastructure and mass job creation. And it is unlikely any major policy changes will emerge from an inquiry into the unrest.

There are also great difficulties in changing policy as it would be an admission that mistakes were made. It would also bring the party up against those who benefit most from its rule – the unions, civil servants, and its cadres who can access contracts. Crisis-driven policy reform, rather than a gradual approach, can pose risks of early derailment, but speed can build its own momentum and success. If the ANC cannot reform after this crisis, its political inability to do so will be entirely confirmed. The drags on reform are the party’s need for patronage and jobs to retain and grow its support base, and its inability to listen.

Government has to be aware that with slower growth and rising unemployment violent social unrest has risen fast since 2008. That alone should have acted as an alarm bell over a considerable period. They also must be aware of how police dockets go missing and many crimes go unsolved, not to mention widespread lawlessness. Yet, ANC policy is unchanging except for plans to expand the role of the state, whether it be through Expropriation without Compensation or a National Health Insurance scheme.

To kick start the economy and instil confidence government will have to signal big changes. While the economy has been hit hard by the violence and looting, it is probably business confidence that has suffered the most. Business has seen a government that was unprepared, cannot uphold law and order, and pursues policies detrimental to growth. Soon after the explosion, government came up with the idea of sending a delegation to London to re-assure foreign investors. There is little point in going to London with a weak story about South African investment and growth.

That story only changes with the passage of the big four reforms. That is, a scrapping of empowerment ownership requirements, the selling off of state-owned enterprises, cuts in government spending to address the deficit and debt, and a change in job-destructive labour laws. There is little room for creativity in changing our predicament. This is what it would take to begin to change the South African story for investors. There are enormous upsides to creating a new South African story, which would allow the country to be viewed as a dynamic emerging market economy.

To change the South African story for investors, law and order has to be addressed. GG Alcock argues here that the looting was not due to poverty, unemployment, and inequality, but rather lawlessness. When people are aware that there is a law and order vacuum the result is usually similar to what happened in mid-July. A poorly trained and under-equipped police force cannot do its job. Corruption has steadily undermined the public attitude to law and order, and left us with a broken system. If one law is not enforced, all laws are undermined. How this is turned around can only come with raising the odds of getting caught and with the law being enforced for even minor transgressions. Economic growth and property rights can only be secure in an environment of law and order.

A descent into vigilantism emerges from inadequate law enforcement, but cannot be a substitute for the rule of law as it will often involve summary punishment. And vigilantism is usually proof that law and order has entirely broken down.

But the government cannot change the South African story because it is simply not listening and the people to whom it talks are careful in what they say. Criticism from the opposition, particularly the DA, has little or no effect on the government. Rarely are the points raised in parliamentary debates by the opposition properly answered by the government.

The government seems often to be in denial about its policy failures, and chooses to blame immense structural forces for its own-goals. It is in denial, does not properly engage in debate, and fails to listen. Year after year the IMF says pretty much the same in its reports – the labour laws kill jobs, the budget deficit and debt are way too high, and the state-owned enterprises are lowering productivity and are a terrible drag on the economy. The rating agencies and private economists all say pretty much the same thing. Yet there is no policy change.

Finance Minister Tito Mboweni has pointed to the unsustainable growth in the budget deficit and debt for years, but seems to have little influence over the final budget outcomes. He has to continually give way on pressures for more bailouts of state-owned enterprises and other spending, despite warnings that this level of spending is all unsustainable. Government will have gained some relief for its endlessly bigger spending plans from the rise in tax revenue that has nothing to do with policy, but rather the luck of an upswing in commodity prices. But the luck of a windfall hardly makes its spending sustainable.

After 27 years in power, most governments lose the ability to listen to advice they do not want to hear. Long uninterrupted periods in power help develop an inability to listen and see, and unaccountability. The moral wave of liberation on which the ANC came to power has also not helped ensure high levels of accountability. For years business, much of academia, and sections of civil society have found it easier to fall on the ANC’s side rather than offer forthright criticism, except, to their great credit, on matters of corruption.

When a government might be prepared to only listen to what it wants to hear, good intelligence is often rejected. South Africa’s intelligence agencies have been undermined by political infighting between those loyal to former President Jacob Zuma and those to the current President. But had the intelligence agencies been fit for purpose and warned of the events of mid-July, would they have been taken seriously?

The government would not like to have heard that rumblings, murmurs, and dissatisfaction over hardship and the country’s poor law enforcement could mean mass social unrest. The story government would have preferred from the agencies is of a dozen instigators plotting the violence. It certainly would not like to hear stories that might suggest the people are against us and there is a massive problem of lawlessness.