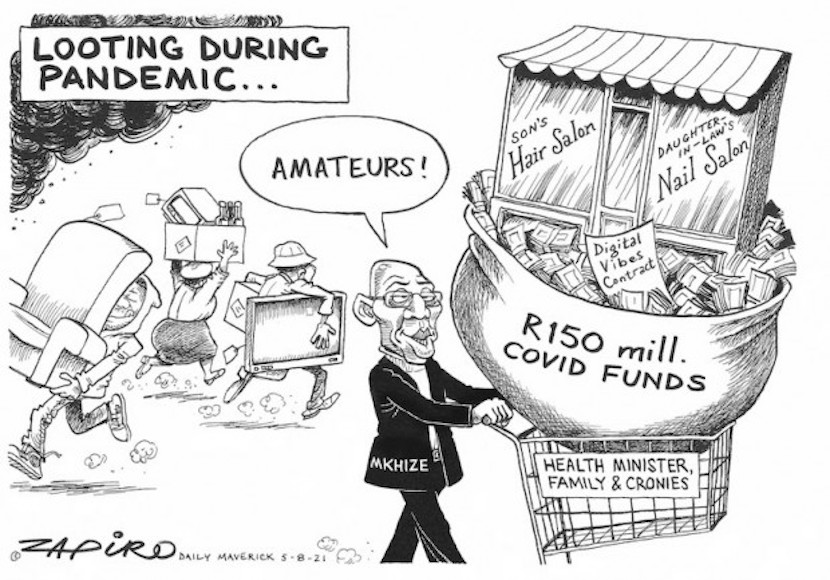 Community member Bruce Robertson has some novel ideas about the professional consequences for SA’s recently departed minister of health. He wrote:

As a recipient of your always welcome daily BizNews newsletter, and having a strong interest in anti-corruption efforts, I found your 11th August BizNews interview about the Zweli Mkhize/Digital Vibes sage, with Paul O’Sullivan, particularly interesting.

A question that arose in my mind is that, if Mkhize is a medical doctor, is he registered with the Health Professions Council of South Africa, the Statutory Body, established as the Professional Body for, inter alia, doctors?

If so, should some investigation of a possible code of conduct contravention not have been initiated by the Council, on the basis of the Special Tribunal affidavit, provided in the public domain, at the above-mentioned BizNews link? Is this Professional Body also failing us, as IRBA/SAICA have done in the State Capture environment, involving Chartered Accountants?

Perhaps this is a possible line of follow-up for the interest of BizNews’ readers. There have to be consequences, at all levels, for the type of behaviour alleged in the SIU documents. Clearly, we are in need of our own version of the Nuremberg Trials, in any possible fora, for the alleged perpetrators of State Capture.

Marius Swart returns to the discussion about tackling SA’s unemployment problem by a renewed focus on education. His email reads:

I am finding a rather interesting theme, if I am reading and understanding these points from fellow readers. To summarise: (1) we might agree that the Government is not to be entrusted with 2c for expenditure, and that the public wage bill is inflated by way of number of people employed and rand value. (2) Yet, with all these educational proposals, we are expecting the (same) Government should be included (good thing) and oversee the legal aspects (50/50 call).

It seems that all the commentators that you posted this week understand what needs to be done, and where weakness are; but their solutions revolve around Government input and setup. We know where the candy is, but the shop owner is too busy packing the shelves to notice we are waiting. We all know what the solution/s should be. So, why not do it ourselves? Why can’t a group of entrepreneurs get together, set up a skill type organisation/association and attempt to run with it outside of Government control?

It is a daunting task, as it might be seen as a labour brokerage type association which would struggle to obtain funding from the private sector. But I am sure there are enough entrepreneurs and companies that would benefit from something like this, instead of waiting on Government.

Surely an institution like Curro could step up and provide a way forward of how to educate the young minds of tomorrow, considering the rapidly changing world. Even if it means breaking the current educational mould. Being the first to attempt change is always hard, but the more people follow, the easier it becomes. And once such a wave starts, it becomes hard to stop. The young minds of tomorrow should then be better placed to take decisions and better care of their South Africa.

Everything has a knock-on effect. To quote the Matrix movies: causality. Every action has a cause and effect.

I do not possess entrepreneurial abilities, but hopefully what I am trying to say could make sense when better presented in discussions (an area that I have noticed I needs lots of improvement).

And lastly today, Barbie Sandler returned to the issue of SA’s population growth. She wrote:

Was interested in reading about the device to be used to limit pregnancies mentioned by Doug Whittaker in your letter. He says he first heard about it in 1976 but that it didn’t take off here. Perhaps because it requires surgery and we don’t see men rushing for vasectomies so I don’t think this will be top of the agenda either. As much as I feel men need to take responsibility for their actions we know this is not the case. So it is the women who must do the hard work. We need many more family planning clinics where the womenfolk can get access to free contraceptives. And the nurses at these clinics need to be chosen for their forward thinking as, sadly, many of them shouldn’t be there. They turn away teens or make the woman who wants no more babies feel guilty. One can’t understand why another woman would be like that to a fellow woman but we know that is the case. Nurses running abortion clinics are the same. I still remember with horror a Carte Blanche programme where women having abortions were literally abused by the nurses. Perhaps there could also be family planning classes at the circumcision schools that take place across the country every year? Teach the men at these schools before being let loose back in society about pregnancies and the cost of a baby through to adulthood. But certainly that is one of our major problems in this country. We need to limit our numbers otherwise we will never catch up.

In the Cape Times this morning a headline shows that last year we had 23,000 teenage pregnancies. About 934 from little girls between 10 and 14! Gosh we have gone radically wrong. We have the highest teenage pregnancy rates in the world. I rest my case.