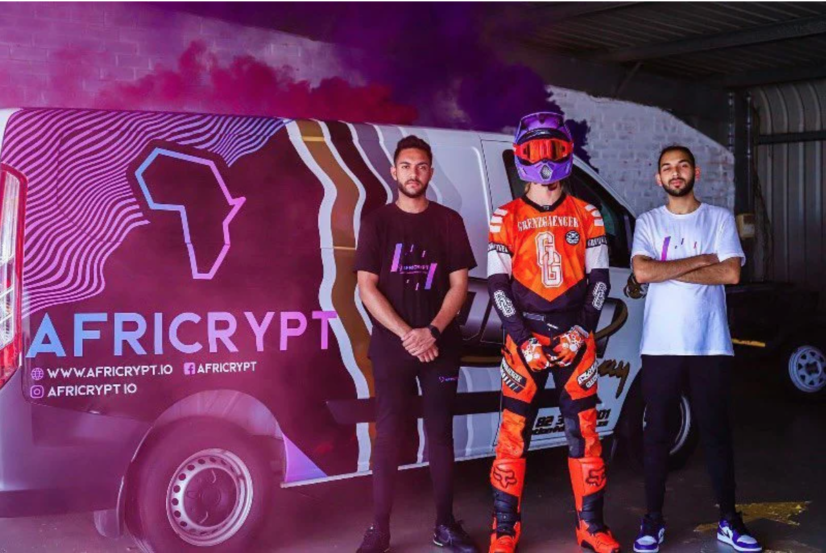 Ameer and Raees Cajee (and their company, Africrypt) started making headlines earlier this year when the pair sent out a notice to investors informing them of a security breach. According to the announcement (see below), the investing platform had allegedly been hacked – with all of the funds stolen. Since then, the story has taken many turns. Silent for weeks, Raees Cajee spoke up, saying that he and his family were “forced to flee the country – with our immediate family, including my disabled father — after receiving numerous death threats.” It was also reported that the brothers had bought citizenship in Vanuatu, a small island nation which gives its citizens visa-free access to over 130 countries, including the UK. Joining BizNews is private investigator Sean Peirce, who was tasked by Africrypt clients to investigate the alleged hack. Peirce explains the process into investigating the cryptocurrency scandal that has rocked South Africa. Listen to the interview below. Read the original article, “Rise and fall of South Africa’s “R54bn” Bitcoin Brothers.” Republished with permission of MyBroadband. – Jarryd Neves

Brothers Raees and Ameer Cajee have ruined people’s lives, and it is only a matter of time before the long arm of the law catches up with them.

Those were the words of private investigator Sean Peirce, who spoke to Carte Blanche in a segment that aired on Sunday night.

Peirce was hired by 35 former Africrypt clients to investigate the disappearance of the brothers along with the millions that had allegedly been stolen in a hack on the cryptocurrency investment scheme.

Peirce said that in his view, the evidence points to the Cajees conducting an exit scam and that there was no hack.

As the Cajee brothers tell it, they launched their cryptocurrency empire from their bedroom before they had even left high school.

“Africrypt’s founder and CEO, Raees Cajee, first learned of Bitcoin in 2009 while watching the news with his father and ever since he’s been hooked,” the Africrypt website stated before it was taken offline. Raees was 9 at the time.

He apparently began mining Ethereum while still in school. He founded his first cryptocurrency business at the age of 13 in a tiny room in a small house in Robertsham, south of Johannesburg.

At the age of 18 or 19, Raees’ lifelong fascination with blockchain technology apparently led him to develop revolutionary artificial intelligence trading technology that generated consistent monthly returns.

Rather than simply using the technology to generate untold wealth for him and his family, Raees cofounded Africrypt Cryptocurrency Investments with his brother.

Africrypt offered astonishing returns for its clients, and these returns were used to recruit more clients.

An investment presentation from around September 2020 showed that Africrypt achieved returns as high as 13% per month for clients on its “Aggressive” plan and never ended a month in a loss. 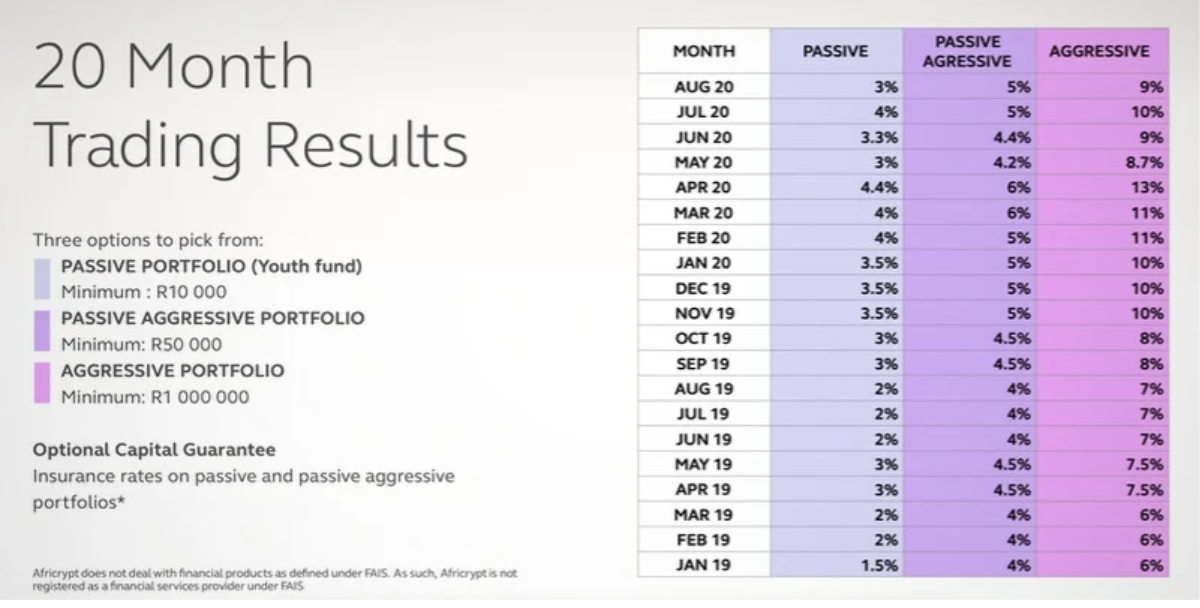 Africrypt earned the pair enough money to live large – reportedly driving around in a Lamborghini Huracan and taking up residence in the luxurious Houghton Hotel.

However, it all came crashing down on 13 April 2021 when the brothers sent out a notice to investors informing them that Africrypt had been hacked and all its cryptocurrency holdings stolen.

The story flew under the media radar until June when reports began to surface that the brothers had gone missing along with $3.6bn (R54bn) in crypto-assets.

However, several investigations have rubbished these claims with the true amount pegged at R200m to R1bn.

Gerhard Botha, the attorney representing a group of disgruntled investors, previously told MyBroadband that there were claims totalling R115 million against Africrypt.

If the promised returns on the investments are factored in, the claims come to R140m.

Botha previously told MyBroadband that there were still some outstanding claims and that the total could reasonably climb to R350 million but would not exceed R500m.

Raees Cajee later told the Wall Street Journal that less than $5m (R75m) was lost when their platform was hacked.

He also claimed that even at the height of the market, Africrypt was managing just over $200m (R3bn).

The largest amount MyBroadband heard was from an investor who said that Raees Cajee boasted on 20 January 2021 that they had $500m (R7.5bn) under management.

In the letter sent to investors following the alleged hack, Ameer Cajee discouraged investors from taking “the legal route”, saying it would only delay getting the money back.

However, a group of clients quickly instituted liquidation proceedings against Africrypt on 19 April 2021. The brothers vanished soon thereafter. 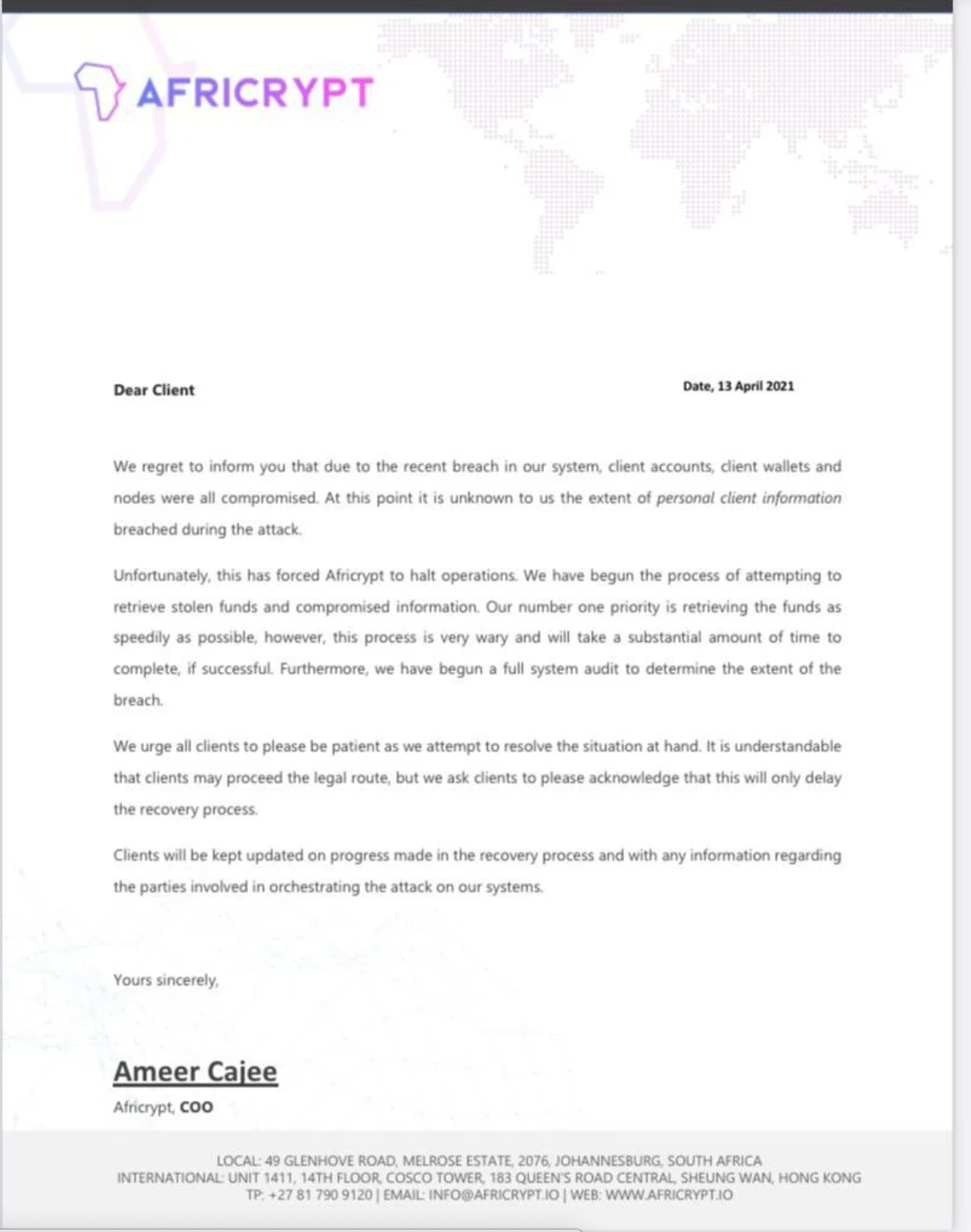 One of the investors who spoke to MyBroadband said that Raees Cajee was incredibly convincing.

“For a 21-year-old, you could not fault him. He was articulate; he was professional; he was legal. Very precise,” the former Africrypt client said.

According to the investor, there were people who had been in business for 30 years who heard Cajee’s presentation and came away impressed, saying that they can’t believe he was only 21.

It was only after hearing these endorsements that the investor said he decided to trust Africrypt with his savings.

“But I don’t want to blow smoke… I think he’s an absolute thief,” the investor said.

The Cajees have repeatedly denied the allegation that they stole clients’ money and insisted that they were the victims of a cyberattack.

Economist Dawie Roodt has also told MyBroadband that he was “immeasurably impressed” by Cajee.

Roodt told MyBroadband of his meeting with Cajee after an investor alleged in court papers that the brothers had claimed Africrypt was managing 15% of Roodt’s portfolio.

Roodt said he never put any money in Africrypt.

“I’m an asset manager. I don’t need anyone else to look after my affairs,” Roodt told MyBroadband.

Roodt said it is well-known that he is interested in cryptocurrencies.

He said one of his financial advisors, knowing his passion for blockchain-related technology, arranged a meeting with Cajee.

“He truly impressed me,” Roodt said.

Despite Cajee’s convincing charisma, Roodt said he elected not to do business with Africrypt as he already has partners working with him on cryptocurrency-related ventures.

While Roodt wasn’t taken in by Cajee, others were not so lucky.

In an email exchange attached to court documents submitted by the legal team fighting for the liquidation of Africrypt, investor and recruiter Adrian Pilling wrote to the Cajees:

In response, Ameer Cajee told Pilling that he should look in the mirror if he were looking for someone to blame.

“If you are looking for a party to blame, please do not direct your anger and hate towards us,” said Cajee.

“Keep in mind that you were the gentleman who assisted Mr Meyer in bringing money of illegitimate sources to our company through illegitimate means,” he said.

“Keep in mind that you were the one who convinced clients to put their entire life savings into the investment, full well knowing of the risks involved.”

The “Mr Meyer” Cajee referred to in his email to Pilling is Juan Meyer – a former business associate of Czech gangster Radovan Krejcir, who amaBhungane described as “a West Rand gold smuggler and illegal refinery owner”.

Court documents filed by the Cajees’ legal representatives suggest that the brothers became mortally afraid of Meyer and elected to flee the country.

However, documents uncovered by The Guardian showed that the Cajees had already looked into obtaining passports from the Pacific island nation of Vanuatu months before Africrypt shut down.

Vanuatu offers a citizenship by investment programme that is relatively cheap at $130,000 (R1.95 million), takes just over a month, and doesn’t require applicants to visit the country.

Additionally, Vanuatu operates as a tax haven without any income, corporate, or wealth taxes.

The Guardian reported that Raees purchased Vanuatu citizenship in October 2020, and Ameer bought his in January 2021.

It also reported that in May, Raees set up a UK-based shell company called Clandestine Limited with his nationality listed as “Citizen of Vanuatu” on the company documents.

When the scandal broke in June, Raees resigned, the report stated.

Following their escape from South Africa, Raees Cajee apparently resurfaced in Tanzania. He had court documents stamped by a Commissioner of Oaths stationed at the South African High Commission in Dar Es Salaam. 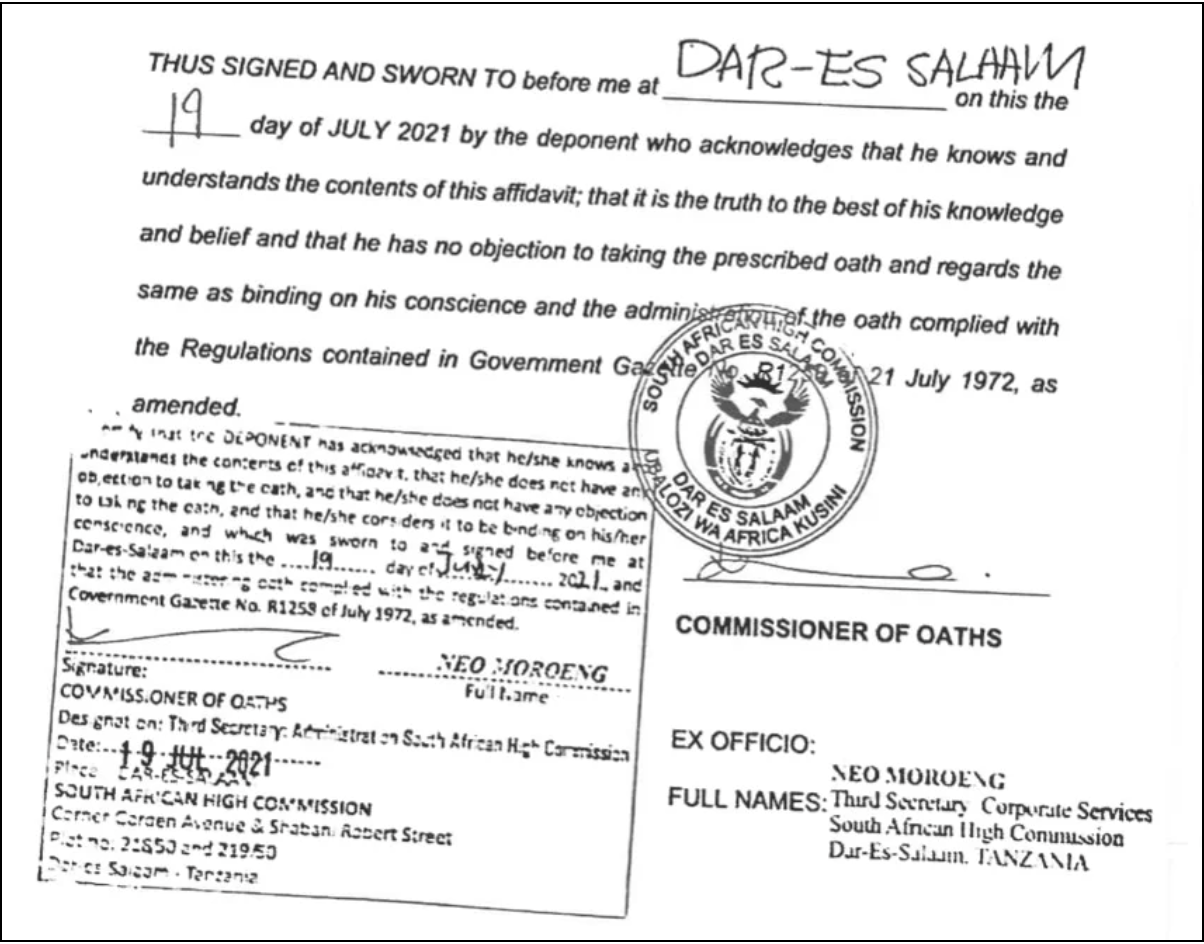 In the affidavit, Cajee stated that they had received numerous death threats.

“We have had our location tracked, our mobile numbers hacked, and my father was, also, at one stage kidnapped,” said Cajee.

According to Cajee, they were hiding in Dubai in May when his father visited a government office and was waved down by Pakistani nationals as he was about to get into his car.

Cajee said that his father thought the people were waving to him because they knew one another.

However, when he approached them, they extorted him with threats to his family in Dubai and his extended family in South Africa.

Cajee said that his father was held for the better part of 12 hours and did as the attackers told him out of fear.

“This appeared to me to be a case of individuals having been contracted in Dubai by disgruntled investors who no doubt intended to intimidate and harass us into making unlawful payments,” Cajee stated.

He said that the matter was reported to the Dubai police. MyBroadband contacted the police in Dubai but did not receive confirmation of the case number Cajee provided at the time of publication.

“It is for this reason that I have decided to remain in a country where my security and safety is maintained. I have thus elected to keep my whereabouts confidential,” said Cajee.

MyBroadband contacted the representatives of Meyer and Pilling, as well as the Cajees, for comment. Neither provided feedback by the time of publication.