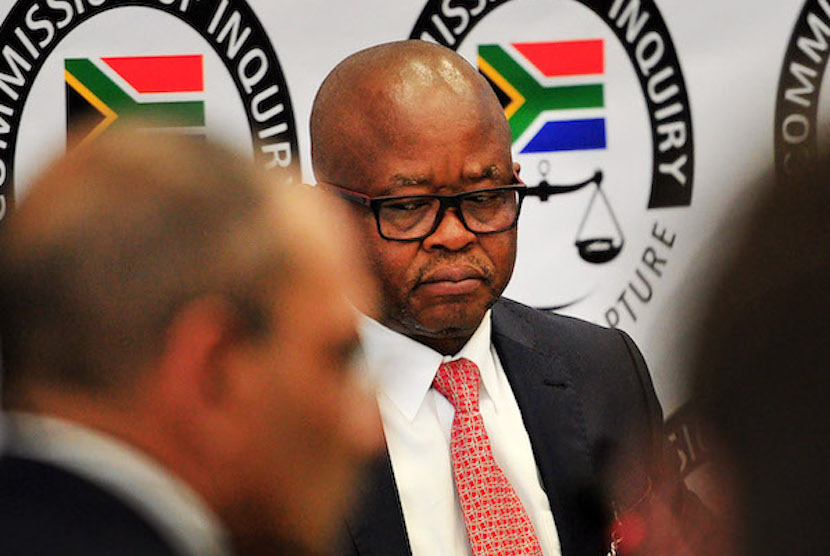 Hot on the heels of the release of part one of Zondo’s report was a video clip of ANC National Chairperson Gwede Mantashe hinting at what consequence management would follow the bombshell findings if it were up to him. You guessed it. Nothing, zero, dololo. Mantashe believes, “We can use that report to look into the mistakes and weaknesses … and try to correct them. That is a better option for me [than singling out the implicated].” If people like Mantashe get their way, the State Capture Inquiry could end up being the country’s most expensive team-building exercise for the heavily implicated ANC. For those whistle-blowers who refused to partake in the wholesale looting of the state, their reward was being tossed to the fringes of society, isolated, threatened, deemed unemployable, and murdered in some cases. My interview with Themba Maseko – a highly respected public servant who denied the Gupta’s demand to hand over R600m in government’s advertising spend – shines a spotlight on the tragic cost of doing the right thing. – Michael Appel

Themba Maseko on the ANC starting its own newspaper

There had been discussions within the ANC for many years about the need to establish an ANC newspaper, or a government newspaper. I was never in support of that because I was of the view that government’s work must speak for itself. You don’t need propaganda machinery because that is essentially what it would have been. When the Guptas came to the picture, they then stole a discussion document that was within ANC circles and ended up creating The New Age newspaper with a view to becoming propaganda machinery. The real idea behind the establishment of the newspaper was a money-making scheme for the Gupta family. It was a platform used to swindle resources from state-owned enterprises and government in general. It was a scam.

Maseko on his first meeting with the Guptas

As I was going into the meeting with Ajay Gupta, I got a call from former President Zuma, basically saying there are these Gupta brothers who need my assistance and I should go and help them. At the meeting, it became very clear to me that I was not going to be part of this criminal enterprise or such a scheme because government has processes and procedures that it follows. There is no way I would be willing to actually transfer the whole [R600m] advertising budget of government to a single media house.

On getting a call from Number One

When Zuma was appointed, I tried to have meetings with him and all my requests were turned down. So, I had never had a one-on-one meeting with him. In fact, the call he made to me as I was going to meet the Guptas was the first and only call I ever received from him. In all my meetings with former President Mbeki or Motlanthe, at no stage did they ever call me to say go and help these business people with whatever they want.

On the power of the Guptas

When I informed the late Minister Collins Chabane about the meeting I’d had with Ajay Gupta, he was extremely worried about the situation. He had been contacted by several government officials and ministers about these sorts of meetings. Deputy President Motlanthe also confirmed this. When the ANC decided it wanted to conduct an investigation, Gwede Mantashe was secretary general at that stage. He also said the ANC was aware of the problem and was trying to find a way of dealing with it. But it was clear the ANC was dealing with what I termed the ‘problem of incumbency’. It was unable to raise questions and challenge its president on matters that were of great concern to many South Africans and also to many ministers in government.

On being the only ANC member willing to stand up publicly

When the ANC realised it could not ignore the issue any longer, they decided to appoint the secretary general, Gwede Mantashe, to investigate. I was the only person willing to go in and give an affidavit to Mantashe. He told me many people had promised they would come and give evidence but it turned out no one was willing to say what they had been subjected to by the Gupta family. A lot of leaders were aware of what was taking place, but they did not have the wherewithal to actually deal with the matter directly.

On being fired as GCIS CEO

I couldn’t believe that the ANC, my party that I had been part of for decades at that point, would actually treat one of its own in this manner. Zuma instructed Chabane to remove me from the GCIS. When I was sitting in the cabinet meeting [in February 2011], the story leaked to the media that I had been fired. That’s how I ended up in the Department of Public Service and Administration. It was basically Chabane’s attempt to try and make sure I still remain within employment. Zuma thought I was out of government.

On Zuma’s ‘blue lie’ about name-dropping

I was really disappointed when I was watching President Zuma give testimony at the Zondo Commission. He was telling a blue lie by saying Minister Chabane is the one who requested my removal from GCIS because our relationship had broken down. This was a blue lie. We provided evidence to the Zondo Commission that Chabane had given me the highest rating for good performance in my job as GCIS CEO. For President Zuma to tell a lie to that extent was something that further demonstrated he lacked integrity as a head of state.

On the cost of whistle-blowing

I was isolated. Many public servants did not necessarily want to distance themselves from me but they just did not know how to deal with me. They didn’t want to be seen to be associated with somebody who was considered a snitch. It led to a period of isolation from my old comrades and from former government officials. But, the most difficult part was not being able to make a living because I couldn’t get a job in the public sector. The private sector also did not want to be seen to be associating with somebody who was considered an enemy of the state. More difficult was the fact that I could not even raise funding to start businesses. When I went to banks and public finance institutions, I was considered a politically exposed person. It was impossible to make a living.

On the future of the ANC

The ANC is going through probably one of its most challenging times as a political party. Factionalism has actually broken the party. There are some people who believe it can be saved, but from where I’m sitting, the decline has not stopped since the exit of President Zuma. More work will have to be done to rebuild the party. Factionalism has affected the core of the party. I’m not too optimistic about the problems it faces being resolved in the near future.

On prosecuting those implicated in the report

Any wrongdoing that is identified in the final report of the Zondo Commission must lead to consequences for people, be they in leadership of the ANC or government. For Mantashe to suggest the report must be used to unite the party basically means no action must be taken against those who broke the law. I don’t buy that. The Zondo report should not, and cannot, be a document to unite wrongdoers and those who are trying to fix the problem.

On capacitating the police and NPA

The president owes this country one big present and that is making resources available to the NPA. Also, it is to make sure all the evidence from the Zondo Commission is converted into charge sheets. Those charge sheets need to go to court so that people can be prosecuted. I am extremely worried about the leadership of the police. There are a lot of cases that require investigations. I’m concerned about its capacity to investigate all of these to make sure the Zondo Commission doesn’t end up being just another report that we file in the filing cabinet and forget about.

On the recent break-in at his home

I am concerned about the security of whistle-blowers. This could be normal crime, but it still remains very suspicious. The timing of it, happening so soon after the release of the Zondo report. The fact that there was no attempted break-in to steal anything. That there was a focus on my bedroom, in particular, is suspect. That the intruders avoided CCTV cameras and made their way to the roof of my house makes it suspicious. As we move closer to the final report being released – and the possibility of court cases being instituted against all those who are implicated – I worry about the security of whistle-blowers who may be expected to give evidence in a court of law.