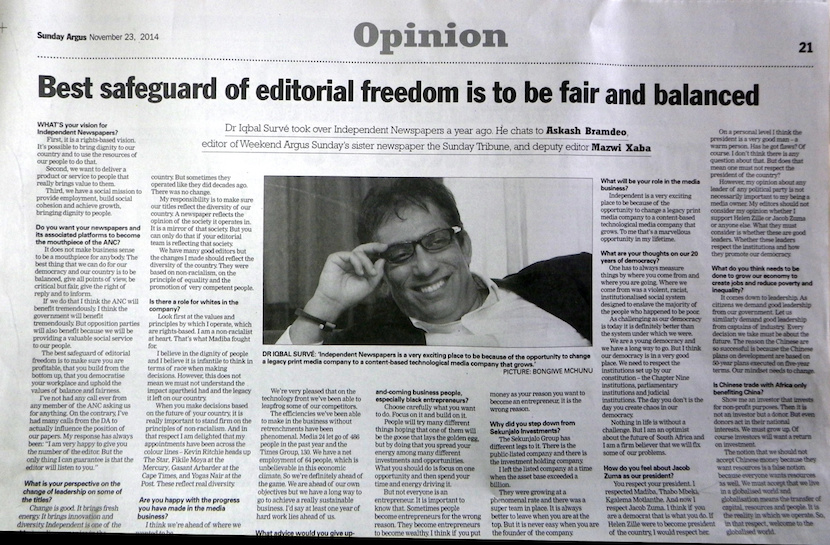 Weird. That’s the only word for it when a government’s senior servants help fund the purchase of a newspaper group whose ‘fake news factory’, then churns out stories undermining it at every turn. Independent Newspapers – whose agenda first serves its owner Dr Iqbal Survé’s business interests, followed by anyone opposed to the ruling faction of the ANC – has now succeeded in turning just about everybody against it. The range is astonishing: from the medical fraternity to big business, the entire media (besides that still owned, run or founded by the Guptas), the ruling elite, several banks and the stock exchange. As circulation drops steadily and it lays off more staff, the once-proud media title is a shadow of its former self; discredited, propagandistic and a sad, albeit it professionally debilitating, journalistic joke. Here’s the latest pregnant chapter in the ongoing saga, a joint statement by the ministries of transport and public enterprises tearing into Independent as a ‘Fake News Factory’. Try not to shake your head. – Chris Bateman

Joint media statement by the Ministers of Transport and Public Enterprises

The Ministries of Transport and Public Enterprises wish to dismiss the falsehoods and fake news peddled by the owners, editors and ‘journalists’ of the Independent Newspapers group, who are determined to advance anti-democratic political objectives in and outside of Government, by regularly misleading the public with disinformation.

For the past three days, various titles of the Independent Group have published a series of patently false front-page stories regarding Ministers Fikile Mbalula and Pravin Gordhan.

With dishonest speculation and malicious conjecture these headlines – “Fikile Mbalula, Pravin Gordhan allegedly fell out over R17 billion Sanral contracts” and “Fikile Mbalula allegedly accuses Pravin Gordhan of trying to cause rift…” – make accusations, with no factual basis, that Minister Gordhan has improper, corrupt relationships with service providers of the South African National Roads Agency (SANRAL), that “Gordhan interfered” in SANRAL tenders to benefit a private company and that there is disunity and divisions in Cabinet.

These events, which according to the group’s newspapers, are based on the mythical accounts of anonymous “Sanral and government sources”, apparently occurred at a Cabinet meeting on 18 May 2021, where, the public is told, the two Ministers “fell out” about SANRAL contracts.

This is patently false: First, Minister Gordhan did not attend the Cabinet meeting because of other responsibilities. Second, Minister Gordhan has no business or personal interest in, or with any company that does business with SANRAL. Third, he has no authority at all over SANRAL or its procurement processes – the entity reports to Minister Mbalula.

This joint statement demonstrates clearly that there is mutual respect and collegiality between the two Ministers as cabinet colleagues. Both serve in Cabinet at the pleasure of the President, and both are unequivocally committed to carrying out their mandated duties, with professionalism and in the interest of the country.

Both Ministers are seeking legal advice on how to protect their rights and how to take action against a persistent, malicious, disinformation campaign conducted by Independent Media. It is important for the public to be reminded that Independent Media are deliberately not members of the South African National Editors’ Forum, nor the South Africa Press Council and do not fall under the purview of the Press Ombudsman. In that sense, this has clearly become a ‘rogue’ element in the South African media industry. Is it no wonder that we have now been witnessing this devastating decline in (even the absence of) journalistic ethics, and standards of news reporting?

Of greater concern to the Ministers, however, is the damage these newspapers cause daily to our democracy by misleading the public with false narratives and fake, manufactured ‘news’. This cannot be allowed or accepted: there must be consequences for their conduct.

We have entered a dangerous period in our democracy when once a reputable and influential newspaper group, which ought to hold elected officials to account (with facts and indisputable evidence gathered from diligent investigations), has descended into a totally discredited ‘news factory’. This is bad for the country and the media industry that plays such a vital role in our democracy by informing the public.

The call to the rest of the South African media fraternity is to be cautious and vigilant when placing reliance on news headlines produced by Independent Media. Similarly, the public must be reminded of the group’s audacious ‘expose’ in 2021, when they reported to the world, without evidence, that a mother of Tembisa gave birth to 10 babies at the Steve Biko Academic Hospital in Pretoria.

Lest we forget: South Africa and the world are still waiting to see the decuplets!

Ministers Mbalula and Gordhan are totally committed to their respective responsibilities and will take every opportunity to expose state capture, corruption and theft, and those who wish to disrupt government and the ruling party.