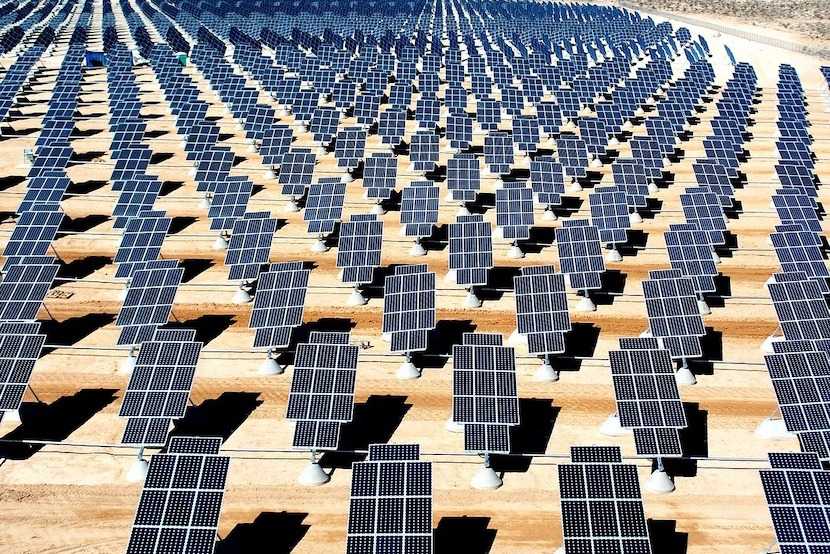 Electricity provision used to be an invisible necessity, but in South Africa Eskom’s loadshedding schedule in recent years has underscored its value and highlighted the perils of relying on coal. Elsewhere, electricity is also top of the agenda, with European countries increasingly incentivising a switch from fuel-guzzling, carbon-emitting vehicles in favour of e-cars. As analysts at global asset management house Schroders underscore, renewable energy is transforming global energy supplies. With that trend comes investment opportunity. Mark Lacey, Head of Commodities, reckons solar energy’s prospects look bright for 2020 and clean alternatives look just as appealing in the longer term. Whether you are looking to develop your wealth building strategy for the short term or with a decades-long investment horizon in mind, renewable energy is a sector to watch. – Jackie Cameron

As the long-term transition towards renewable energy continues apace, we see a sunny outlook this year for solar energy companies, as well as onshore wind and energy storage.

The global energy transition is the transformation of the world’s energy supply, away from polluting sources such as coal, oil and gas, and towards renewables. We see this as a $120 trillion investment opportunity over the next 30 years.

The driving forces behind this transformation include political factors, as the world intensifies its efforts to limit temperature rises to less than 2°C (in accordance with the 2015 Paris Agreement). Economic factors are another element, as the cost of producing renewable energy has fallen substantially and is now competitive with other sources of power. The third force is consumer demand as new technologies, such as electric cars, are adopted en masse.

Energy transition activities include not just renewable energy generation but also the supply of equipment such as wind turbines or solar cells. Then there are the grid operators and electrical equipment suppliers who are needed to enhance transmission and distribution networks. And there is huge need for increased energy storage, involving battery manufacturers, fuel cells makers and storage installers, among others.

The energy transition is a potential long-term, structural investment opportunity in all of the areas mentioned above. However, we think 2020 could be an especially interesting year for some of these individual sub-sectors. Of particular interest, in our view, will be solar, wind and energy storage.

Shares of solar energy companies had a strong start to 2019, supported by hopes of robust demand from China. Investors expected around 40 gigawatts (GW) of demand but this failed to come through. This was largely because of policy uncertainty: China didn’t confirm its subsidy policy until July 2019. This meant projects were delayed because it was simply too late in the year for all projects to get final permissions, grid connections and be built. Demand instead is likely to have been around 20 GW.

Some of these delayed projects should carry over into early 2020. Meanwhile, China looks poised to make an earlier subsidy policy announcement in 2020 to avoid making the same mistake again.

2020 will most likely be the last year of solar subsidies in China, and with tax credits continuing to phase down each year in the US, we anticipate strong demand as projects are brought forward to benefit from these.

But even without this support, we see a bright long-term outlook for the solar sector. In China, and in other countries, it is government policy to drive growth in renewable energy production. What is more, solar is now cost competitive without subsidies.

The picture for onshore wind power in 2020 looks similar to that for solar: it’s the last year of subsidies in China and tax credits in the US so we expect significant capacity additions as developers take advantage of these. This could, however, mean that the market is weaker in 2021. That said, there are ongoing discussions to potentially extend the US wind tax credit by a year which would help the sector in 2021.

It’s a different story for offshore wind. These projects are more complex and take longer to plan. It so happens that there is relatively little new capacity planned for next year and so the sector could experience some weakness.

The flipside is that subsequent years look set to be much stronger for offshore wind, partly due to expected increases in installed capacity. The chart below gives estimates from BNEF (Bloomberg New Energy Finance), with a significant pick-up expected from 2025. 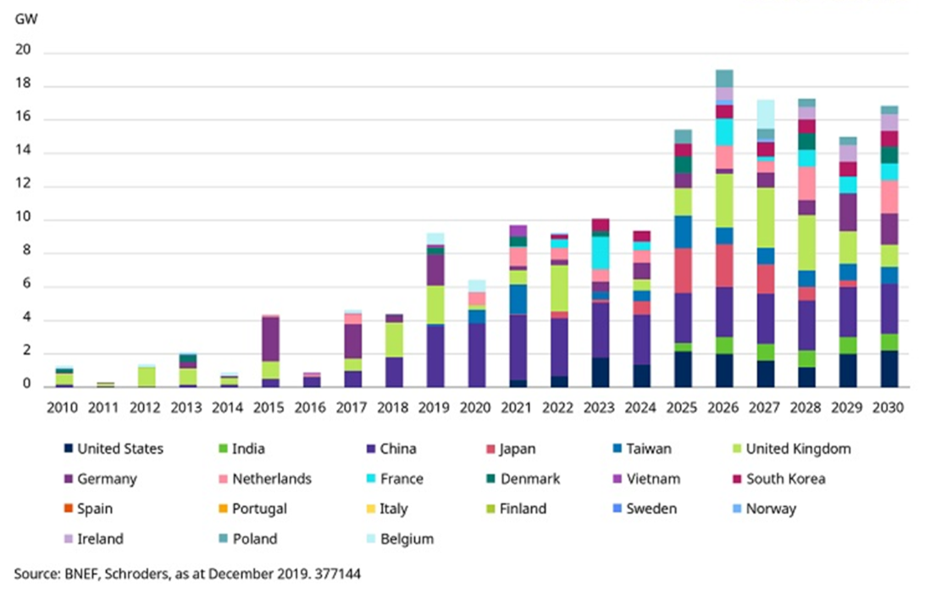 Another aspect is the service contracts that come alongside capacity installations. Installing new capacity is a one-off project that typically carries a profit margin of around 8%. But wind turbine manufacturers usually sign multi-year contracts to service and maintain the installations too. These tend to carry much higher profit margins (up to 25%) and provide a reliable source of future revenues.

We think the market all too often views wind manufacturers as being reliant on the installation cycle, and ignores the ongoing revenues that come from the service contracts. The share of services in the overall mix of revenues looks set to rise in the long term, making revenues more consistent over time.

Batteries and storage set to take off

The energy storage and battery sector is another that had a tricky 2019. This was primarily down to two factors. Firstly, weaker-than-expected electric vehicle demand from China weighed on the battery market amid the scaling back of subsidies. Secondly, fires at some storage facilities in South Korea weighed on demand for storage (these fires were caused by poor installation rather than any specific problems with the battery cells themselves).

With the installation problems resolved, we expect 2020 to see a pick-up in the energy storage market. There is a need for utilities to store power produced by renewable energy given the peaks and troughs of both renewable energy production and pricing.

There are a number of different battery types but lithium-ion batteries are the most widely used. As well as storage by utilities, the growth in electric vehicles looks set to drive a recovery in this market, in 2020 and beyond.

A small but growing part of the storage market is the residential side. Transmission and distribution grids in areas such as California are becoming increasingly vulnerable to outages. Many residential customers are therefore choosing not just to have solar panels installed on their properties, but battery storage too. This gives them greater security in the event of a grid disruption.

Looking at these three sub sectors together, it seems clear that subsidies have caused demand distortions in 2019 and will continue to do so in 2020. Subsidies have a role in supporting early adoption of new technologies but they cannot last indefinitely. As we can see from solar and wind, they distort the market by creating incentives to install capacity in one year as opposed to the next.

Like ripping off a plaster, the removal of subsidies may cause short-term pain but ultimately leads to long-term health. Renewable energy and electric vehicles are now cost competitive and therefore do not need subsidies. Their removal should end distortions and ensure that the most competitive and sustainable companies are the ones to thrive.

The three sub sectors outlined above – solar, onshore wind and batteries/storage – are ones where we see specific drivers of faster growth in 2020. However, the energy transition as a whole is an investment theme that continues to gain traction. We would expect news flow around policy developments, price competitiveness and consumer demand to support long-term growth across all energy transition activities.