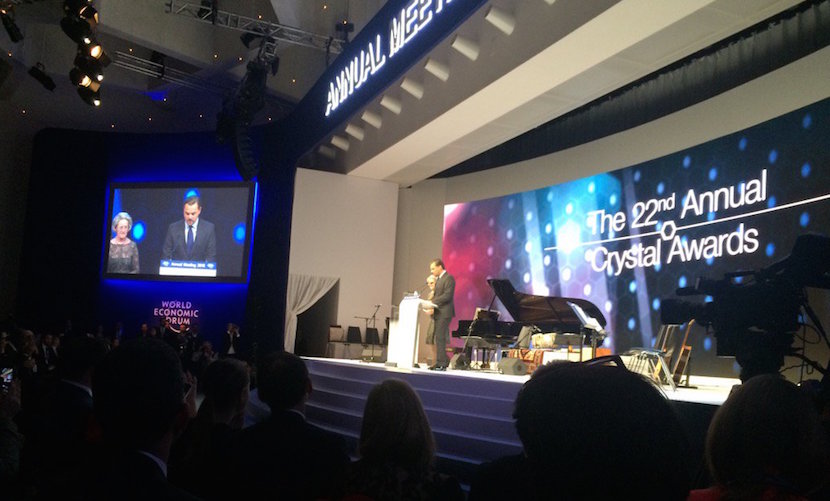 Fresh from his latest triumph at the Golden Globes, the world’s leading movie star Leonardo DiCaprio was supposed to pick up his latest gong, say a few words and leave to polite applause. Instead, he grabbed the opportunity to harangue some of the rich and powerful gathered in Davos for the 45th annual meeting of the World Economic Forum – holding court for eight minutes. In more than a dozen visits here, it was easily the most powerful speech by a recipient of the WEF’s Crystal Awards. One highlighted by DiCaprio’s commitment to inject another $15m into his Foundation’s efforts to fight climate change denialists – a bunch of whom would have been among the couple thousands assembled. A fascinating speech whose transcript is well worth reading and absorbing. On this showing, if Leo aims to one day follow in Ronald Reagan’s footsteps, he certainly won’t be over-reaching. – Alec Hogg

Thank you Professor Klaus Schwab, Hilda Schwab and the World Economic Forum for this generous award. Your recognition of my work for my Foundation and our partners across the globe is a true honour.

Last month in Paris, world leaders reached an historic agreement that provides concrete framework to reduce carbon emissions. This was an important first step, but we’re a long way off from claiming victory in the fight for our future and for the survival of our planet. The Paris Agreement was a call to action but it’s now up to all of us to build this progress with ingenuity and a commitment to change. Together, we are fighting to preserve our fragile climate from irreversible damage and devastation of unthinkable proportions.

I’ve been travelling recently all over the world for a documentary about how this crisis is changing the natural balance of our planet. In Greenland and in the Arctic I was astonished to see that ancient glaciers are rapidly disappearing well ahead of scientific models. In India, I met farmers who’ve seen their crops, their very livelihood literally washed away by historic flooding. There’s no doubt (to the World Scientific Community) that this is a direct result of human activity and the effects of climate change will become astronomically worse in the future.

Last week, President Obama told those who continued to deny the irrefutable science behind climate change that they would find themselves increasingly lonely in a swell of voices calling for action.

Studies also show us that those who deny the reality of climate change will also find themselves less economically successful. We simply cannot allow the corporate greed of the coal, oil, and gas industries to determine the future of humanity.

Leonardo DiCaprio not only an incredible actor but passionate environmentalist- “Corporate greed cannot determine the future of humanity” ?

Those entities with a financial interest in preserving this destructive system have denied and even covered up the evidence of our changing climate. Enough is enough. You know better. The world knows better. History will place the blame for this devastation squarely at their feet. Our planet cannot be saved unless we leave fossil fuels in the ground where they belong.

Twenty years ago, we described this problem as an addiction. Today, we possess the means to end this reliance. Professor Mark Jacobson and a term of researchers at Stanford University have proven that we can meet the world’s total energy demand by using existing, renewable technology by 2050. To make that potential a reality, we need the collective will and conviction of political business and philanthropic leaders like all of you.

This transition is not only the right thing for our world. It makes clear economic sense and it is possible within our lifetime. A shift of this magnitude will save nearly 42-trillion in global energy costs while creating 20-million new jobs.

Over the last several years, organisations and individuals worth $3.8trn have already committed to divest their fossil fuel holdings and replace them with new investments in clean, renewable energy projects. Leaders like Bill Gates, Mark Zuckerberg, and Jeff Bizos have already pledged to build a Zero Emissions future.

I ask you to join them because if we all do our part and act with bold leadership, we can achieve major, meaningful progress. It is not only an inevitable transition. It is also imperative for the future of our planet, which brings me to the other side of this very important issue and the flipside to the environmental crisis i.e. the protection of our planet’s last remaining natural ecosystems.

Ecosystems that provide us with breathable air, drinkable water, fertile soil, and bountiful seas. These complex ecosystems can never be replaced. They are the foundation of our global economy and more importantly, our interconnected climate. Life without them as we know it, would simply collapse.

Fifteen years ago today, I developed my Foundation to focus on these critical issues. Currently, less than three percent of all philanthropic giving, goes to defending our planet. Given this limited support, it’s no surprise that roughly only two percent of our oceans and 12 percent of our lands are formally protected from invasive human activity like commercial fishing, agriculture, logging, and energy extraction.

Again, three percent of all philanthropic giving goes to the protection of our only home – Planet Earth. Today, at L.D.F., we are achieving tangible, exciting results with over 70 partners across 40 countries and all five oceans. By working with the innovative grassroots organisations and leaders, we’ve quickly donated critical funding they need to rapidly scale up their work.

Over the last decade, we’ve provided direct grants to support projects that have expanded; protected areas on land and on sea, protecting iconic and endangered species, and empowered indigenous communities to fight back against corporate encroachment on their lands but this number needs to grow and with your help and partnership, it will.

Generosity is the key to our future. With that, I’m pleased to announce today a $15m grant new commitment from L.D.F. to fast-track cutting edge sustainability in conservation projects around the world. A prime example of climate change and environmental protection is our Grant to the Rainforest Action Network and their partners on the ground to protect the last remaining rainforests on the Indonesian island of Sumatra.

Over the last year, major fires across Sumatra have released more carbon emissions every day than the daily activity of the entire U.S. economy. In an effort to protect these last remaining rainforests [the vital ones of our planet], our foundation is funding their effort to preserve 6.5-million acres from the invasive and destructive practices of the palm oil industry. We are underway with similar efforts in the Amazon Rainforests of Ecuador where our support and indigenous efforts to stop rampant and destructive oil extraction that is poisoning their lands and communities.

In the United States, we are partnering with a Solutions Projects to promote clean energy and support local efforts to implement these projects in their communities. In our seas, we have partnered with Google and funded the Global Fishing Watch, which is a revolutionary new platform that will actively monitor and ultimately help end the destructive practices of over-fishing.

Additionally, we need to protect the size of Nebraska, the Indian Ocean off the coast of the Seychelles Islands, which is home to vital marine species. Imagine what we could all do with more partnerships, with the alliance of many of you in this room. So much can be done if we all work together. With your help, we can quickly identify and fund the most innovative and effective projects that have the greatest potential to avert the crisis we face.

As I look across this room, I’m optimistic that our ability to convene the most significant and influential minds on the planet can result in the global transition necessary to protect both our society and our natural world. The challenges before us require each and every one of us to take action. We owe this to ourselves but more importantly, we owe it to future generations who are counting on all of us.

Thank you all very much and thank you for this great honour.