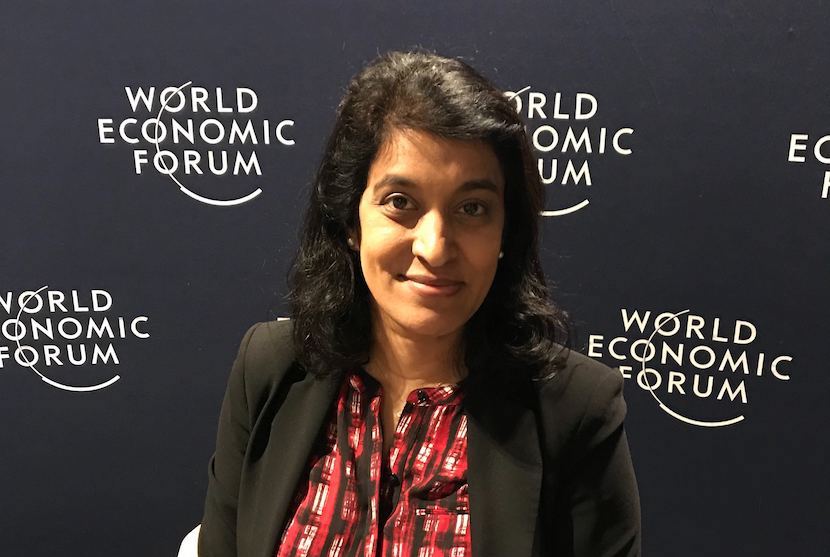 Blockchain is a technology that is proving to be useful all over the world and experts in the field believe Africa is the one place that could benefit the most. The Head of Blockchain and Distribution Ledger Technology at the World Economic Forum, Sheila Warren told Biznews that Africa was generally not burdened by “tech debt” and it would be easy to leapfrog the developing world in deploying blockchain and it could used to make systems more efficient. One of the areas where blockchain could be deployed is to root out corruption. The WEF is currently running a pilot programme in Colombia that it is focused on reducing corruption in procurement and Warren said they have been speaking to South Africa to bring the programme to our shores. – Linda van Tilburg

This coverage of the global conversation on change is brought to you by BrightRock, the first ever needs matched life insurance that changes as your life changes. With me is Sheila Warren, the head of blockchain and distributed ledger technology at the World Economic Forum. Blockchain can be for Africans, a daunting concept. How could it be relevant and be used to enhance development?

It’s important to note that there are actually a number of experiments happening on the continent right now in real time that are exploring the use of blockchain technology to make systems more efficient, to provide more effective tracking around labour for example, or provenance. There’s a lot of work happening in supply chains and I can go into those specific examples if you’d like me to, but it’s certainly active on the continent. So the idea that there is not a blockchain presence in Africa is not correct. There actually is quite a vibrant and thriving blockchain awareness in certain parts of the continent – particularly in southern Africa and Eastern Africa.

So what are the applications for blockchain in the South African business community and South Africans in general?

I’m fortunate enough to have a woman from South Africa on my team who has worked with 100 different companies from around the world and because she’s a South African herself, she has a deep knowledge of the South African community and business community there. We are launching – in April – a blockchain supply chain tool kit and what it basically says if you are part of a supply chain and you want to think about a blockchain deployment that might help you with tracking and traceability, or with enhanced efficiency in your system, here’s how you do an analysis. How you make the blockchain effective. I think it’s interesting to note that the World Food Program is doing experiments in Djibouti and Ethiopia and they’re looking at provenance and tracking and enhanced efficiency in the shipments of goods – basically from ship to train etcetera – so there’s already this kind of opportunity and I actually think that Africa and South Africa in particular is really well positioned to take advantage of this technology because you’re not burdened by a tremendous tech debt like a huge infrastructure.

So is this one of those areas where we can actually leapfrog some of those developed nations?

That’s exactly right. Another case that I’ll cite is a BitPesa, they were operating out of Nairobi for quite some time now and they were using Bitcoin as an intermediary to trade African currencies. So they actually created a new African capital market and more stability in African capital markets using Bitcoin as intermediary. Bitcoin of course is a blockchain backed currency. So I think that the peculiarities of the continent – regardless of whether it’s a more developed kind of South Africa, Eastern Africa, West Africa, some parts of North Africa – I do think that it’s very well positioned to take advantage of the opportunities posed by this particular technology.

Blockchain also provides a way to hide money which, with corruption is a problem in Africa, it could be easier for them to hide and not be able to trace stuff. So how do you address that?

Yeah it’s a great question. I do think that its one of the criticisms that’s launched at Bitcoin – particularly because it does provide for anonymity – but a black teen doesn’t necessarily require anonymity. That is a design choice that’s made in the implementation, you actually can choose to make all information held in a blockchain fully transparent. So we currently, at the Forum, are engaging in a pilot with the country of Colombia – that is focusing on reducing corruption in public procurement – and we have spoken to South Africa, about potentially bringing this pilot to Africa if it proves to be successful. Because of course corruption is something that’s very important as it gets a lot of attention all over the continent. The idea there, is that a blockchain assists in transparency. It’s not obvious that transparency will lead to accountability or a reduction in corruption. However if you have the right policies in place around the transformation of that information and making it understandable – to journalists or to the average citizen – then you do have the ability to have community policing of things like a public current process to ensure that only the right or appropriate participants are actually engaging in that process.

That’s exactly where the problems came in South Africa – with procurement and government contracts. Do you think that it could be used to prevent corruption?

I absolutely think so. I think there’s high hopes there, but I do think the ability to immutability – as we say in the blockchain world – to permanently immutable record information using something like a block chain, actually poses new opportunities to combat corruption from its very beginning – because the probability of being caught is higher – but also to increase the time to which they are caught and therefore allowing deterrent or accountability measures to be enforced.

You mentioned speaking to the South African government. How was this received?

Quite well. We’re waiting to see how the experiment goes. We’re very open. This is a new area of engagement for us, actually for the whole blockchain ecosystem, and we are hopeful the pilot will be successful.

Is there particular application in the financial space?

In addition to the African capital markets example, I think that the digital economy is something that obviously is upon us. We are living in the digital economy and there’s an opportunity for something called asset Tokenisation. What that is, is basically taking real property assets, an example often used is real estate and fine art, so I may not be able to purchase a particular artist’s work – because it’s out of my price range – but you could imagine that I could own a share, a digital piece, a fraction of a particular painting and I could then trade on a secondary market. So I would be banking on the appreciation of that artist’s body of work or that particular piece of work over time, but be able to make that investment. But I think there’s a much more democratic use case which is that a farmer for example could actually tokenise or securitise, or make liquid his crop yield year over year and basically the community can bet on or invest in a particular crop yield and the success can be a trigger for wealth creation in the community. So you incentivise or tie a community’s general wealth – via secondary market creation and liquidation of assets – to the actual economy that’s happening on the ground in a particular location.

I suddenly thought of timeshare when you said that but it’s not that.

It’s not a terrible analogy, but really what we’re doing here, is we’re democratising the opportunity to invest.