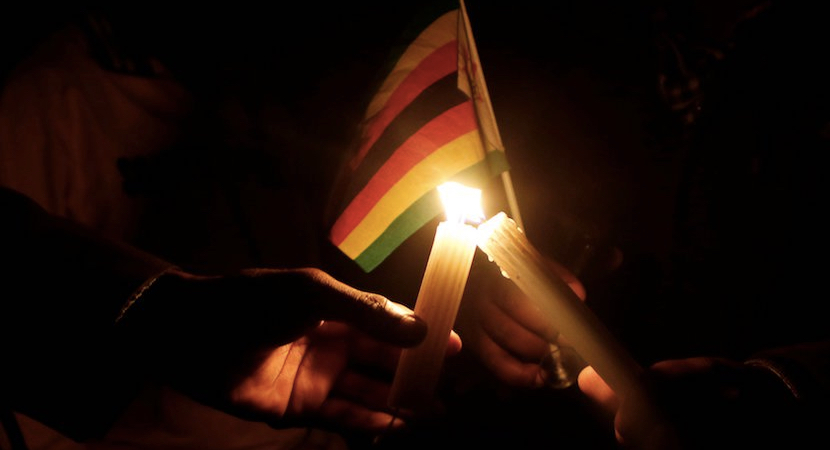 CAPE TOWN — Edgy rock star, the late David Bowie’s lyrics of “putting out the fire with gasoline,” come to mind when considering Zimbabwe’s ongoing slide into chaos. Now the military-led government, desperate to bolster the emptied coffers, has doubled the price of petrol, sparking nation-wide riots that this week claimed five lives and left 24 people injured. Like back-to-the-wall nations throughout history, a scapegoat is required and Hey Presto! it’s the opposition Movement for Democratic Change (MDC), which has “activated its notorious terror groups,” says Zimbabwe’s security minister, Owen Ncube. Just who broke into and set alight the MDC’s Harare HQ during the chaos we’ll probably never know. One mark of a country in deep trouble is its security minister blaming not only the official opposition, but NGOs and civil society bodies. In South Africa we remember it too well, pre-1994. Zimbabwe, besides making its fuel the world’s most expensive, has invited Russia’s diamond mining giant Alrosa back to plumb its diamond fields, as it ponders waiving a rule preventing foreign investors from holding a controlling stake in mines. Until now the Zimbabwean military were accused of sneaking diamonds out the country. This is probably far less trouble – and more profitable. – Chris Bateman

By Brian Latham and Desmond Kumbuka

The protests, which spread from the capital, Harare, to Zimbabwe’s second city of Bulawayo and some smaller towns, followed the government’s decision to increase taxes on fuel, more than doubling the price of the already scarce commodity and making it the world’s most expensive when compared to prices quoted by GlobalPetrolPrices.com.

The Zimbabwe Association of Doctors for Human Rights said 13 protesters were treated for gunshot wounds on Monday. NewsDay, a Harare-based newspaper, reported the same organisation as upping the number of injured to 24 and five killed during the demonstrations.

The opposition Movement for Democratic Change said in an emailed statement its headquarters in Harare were broken into Monday night and set ablaze by unknown assailants.

"We are protesting because it's come to a time where things are hurting. People are suffering."

Riots have broken out in Zimbabwe following the doubling of fuel prices. Our correspondent @shingainyoka reports from the scene. pic.twitter.com/D9ehdXj6nW

Mnangagwa’s trip to Russia was planned before the protests erupted. He’s also scheduled to visit Kazakhstan, Belarus and Azerbaijan before flying to Davos, Switzerland, in an effort to raise investment for his economically blighted nation. His absence leaves Vice President Constantino Chiwenga, a retired general, in charge of the southern African country.

Security Minister Owen Ncube told the state-controlled Herald newspaper that the MDC, non-governmental organisations and civil-society bodies were to blame for Monday’s violence.

“The prevailing security situation in the country is a culmination of a well-orchestrated series of events by the MDC Alliance working in cahoots with NGOs, civic society, youth organisations, pressure groups and individuals,” he told the Herald, adding that the “MDC Alliance activated its notorious terror groups.”

The Zimbabwe Congress of Trade Unions, which called for three days of protests on Sunday, urged Zimbabweans to continue the demonstrations today.

Russian diamond giant Alrosa is going back to Zimbabwe

By Yuliya Fedorinova and Thomas Biesheuvel

(Bloomberg) – Alrosa PJSC, one of the world’s top diamond miners, is returning to Zimbabwe after a more than two-year break as it expands outside Russia.

The company will develop new mining operations in the country with the support of the government, Alrosa said Monday as Zimbabwe’s President Emmerson Mnangagwa visited Moscow. The Russian producer opened an office in Zimbabwe last month, Chief Executive Officer Sergey Ivanov said at a press conference.

Mnangagwa, who became president in 2017, sees diamonds as a key way to help revive Zimbabwe’s mining industry, which suffered years of decline under his predecessor Robert Mugabe. The government is considering waiving a rule that prevents foreign investors holding controlling stakes in its diamond mines.

“We also seek to support Zimbabwe in the development of its diamond-mining industry in line with industry’s best practices,” Ivanov said in a statement. Geologists and mining engineers from Alrosa will arrive in Zimbabwe in the next month to start operations, it said.

Despite the country’s diamond riches, no major producers operate there. Rio Tinto Group sold its stake in a project in 2015 and gem giant De Beers quit the country more than a decade ago. Alrosa stopped working in the nation in 2016, a few years after first studying assets there.

Zimbabwe’s diamond production has tumbled in recent years as easy pickings at the once vast Marange diamond fields have been exhausted. Output is down almost 75% in the past five years, with the southern African nation now producing just a fraction of what Russia mines.

Mining at Marange has also been opaque. After initial gem discoveries, there was a rush of artisanal miners, followed by groups led by closely held Chinese and South African companies. Human-rights activists have accused Zimbabwe’s military of smuggling gems out of the country and said that little benefit has gone to state finances.

Alrosa has so far mostly focused on Russian fields, with its main overseas asset being a major stake in Angola’s Catoca mine, one of the world’s biggest. While producers such as Petra Diamonds Ltd. and BHP Group have long stopped operating in Angola, Alrosa also has plans to expand further in the country.

Russia’s diamond resources at already working fields are expected to be fully exhausted by 2047, Natural Resources Minister Dmitry Kobylkin said in an interview with Interfax last month. So along with new studies in its home country, Alrosa has to look to Africa, he said.