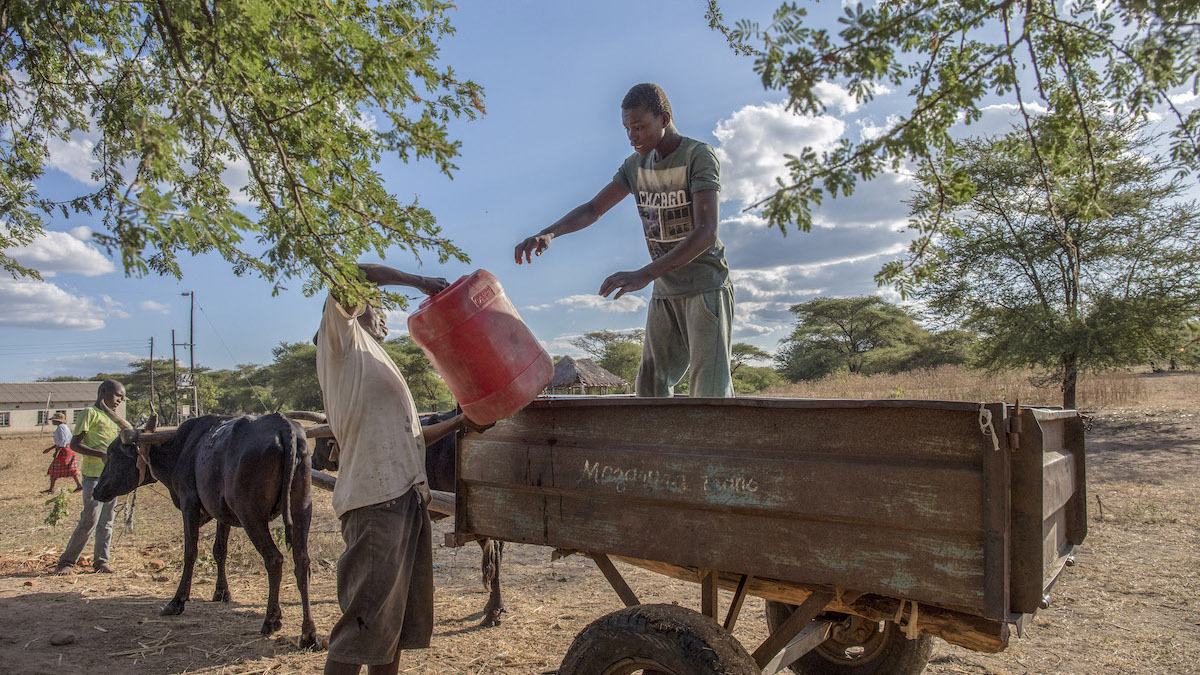 In her letter from Zimbabwe, Catherine Buckle describes the tragedy of dry and impoverished villages yielding only subsistence crops, while travelling through what used to be prime farming lands with only broken down, derelict shells where homesteads used to be, with rusty signs, pockmarked walls, fences gone, window frames and roofing stolen. A man the writer met on her travels told her that 90% of the people in the villages had lost their last crop due to drought and have no food. The Minister of Lands said the country currently has 474,966 tons of maize in stock, enough to last the country 14 months. Yet only three weeks ago, the World Food Programme said they were planning a food relief programme targeting 700,000 people in Zimbabwe starting this month. The truth is that despite the government spin, many people in Zimbabwe are starving. – Sandra Laurence

Full pantry while pots are empty

It’s hot and hazy and red and purple in Zimbabwe this October. Summer is here and temperatures are soaring; gone are jackets and trousers and the sky is a deep blue when you can see it – most days it’s obscured by the suffocating smoke fromfires scorching the land before planting. Our doors and windows are wide open from dawn to dusk and the summer birds are back: Red-winged Louries (Turaco), Paradise Flycatchers, Ibises and Egrets. Jacaranda trees along the roads in towns and cities are carpeting the ground with their soft purple flowers and in our gardens shiny black mulberries are dripping from the trees and are utterly irresistible, leaving feet and fingers stained with purple every time you pass by and pick a mouthful. Out in the bush the lucky bean trees are a sight to behold, their scarlet flowers a beautiful beacon in the bleached, dry landscape.

And in this beautiful Zimbabwe the endless toil of people scratching a living in the dust is relentless. Women and children everywhere are selling sweet potatoes, purple or white, the super-food of the First World piled up in little pyramids in bowls in the dust of the Third World. Youngsters stand on the roadsides holding up huge bundles of newly harvested green onions, bright orange carrots or dishes full of red tomatoes.

On a recent trip into a farming area I had to keep closing my eyes to hide the tears that annoyingly kept welling up. Twenty-two years later and the pain of the past still comes flashing back as the dust rises from the yellow sandy farm roads. Some might call it PTSD: we just call it Zimbabwe. We travel through what used to be prime farming lands but now the homesteads are unkempt, broken down, derelict shells, with rusty signs, pock marked walls, fences gone, window frames and roofing gone, the occasional splash of a bright purple Bougainvillea bush the only survivor of the former love that once identified farmers’ gardens and driveways.

The previous huge fields of crops or grazing livestock are replaced mostly by a mud hut or two, a small field of harvested maize and maybe a pair of oxen pulling a plough through baked red soil or a foursome of donkeys pulling a cart. Every now and again we pass a small crop of wheat but everywhere the signs of the struggle to survive are vivid. A man I met told me that 90% of the people in the villages had lost their last crop due to drought. 90% have no food and they search for casual work so that they can buy maize and grind it; they need 20kg a week to feed a small family. “I’m just stranded,” another man told me, the emotion catching in his throat, “I have to choose between keeping my son in school and buying food.”

So with the sight of these wasted farms and the struggle so many are having just to survive, I tried to make sense of the news we are hearing from the government this week. The Minister of Lands said the country currently has 474,966 tons of maize in stock, enough to last the country 14 months. But it was only three weeks ago that the World Food Programme said they were planning a food relief programme targeting 700,000 people in Zimbabwe starting this month. The WFP country representative, Franscesca Erldelmann, said the “number of food insecure people had shot up from 2.9 million to 3.8 million” people in Zimbabwe and she said “more households could go hungry as grain stocks dwindle.” (Reuters)

The tragic irony of apparently over a year’s worth of food in the national pantry while pots are empty in the villages is not lost on us. The politics, propaganda and spin aside, the truth surely lies out there in the dusty villages, where people are scratching an existence in the baking sun, stuck in the middle as they have been forever.

I end this letter with the exciting news that my new book is a number one new release on Amazon. Thank you to everyone who is helping to make this book such a success.