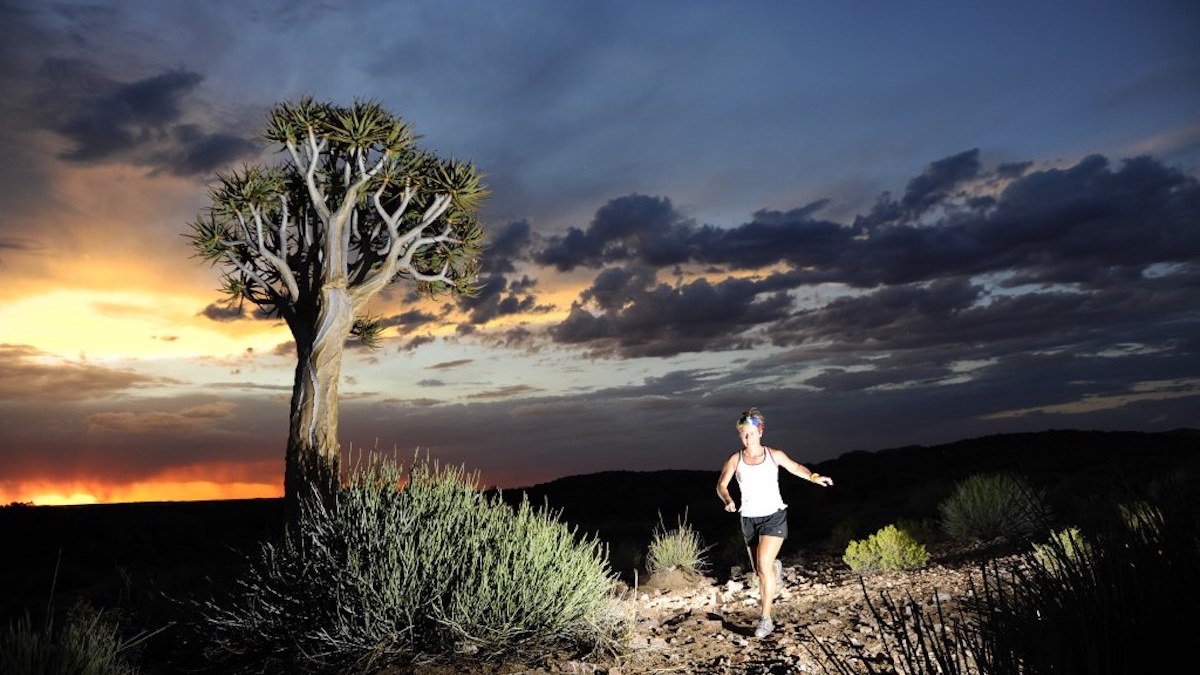 This year’s BizNews conference will be opened by lawyer-turned-extreme-athlete Kim van Kets, who personifies South Africa’s deep potential. Best known for having completed the first ‘triathlon’ of SA’s 6,762km border in 148 days, in this fascinating podcast with Alec Hogg she explains that when her daughter finishes school, her goal is to run the length of Africa “before her body gets decrepit.” Based in East London and married (for 22 years) to fellow adventurer Peter, she promises to share a message of hope with the full-house of 250 delegates in the Drakensberg at the end of the month.

When I met Peter, we were both already very involved in long-distance ultra-type events. And I think really we just enabled each other. Over the years, we’ve become increasingly hectic because we’ve been almost given permission to do so. Certainly, when he first rowed across the Atlantic, I had no immediate plans to do anything too hectic because when he made the decision to do so, I was pregnant with our child, so I first had to give birth to her, then wait until she was viable before I set off on my own expedition. So shame, Hannah has been almost a baton that over the years Pete and I have handed to and fro, you know. Okay, so “here is Hannah” and I will set off on one of my races or expeditions and then when I come back she gets handed over, and then the other person heads off. I really think that Peter and I get it, because I understand why he wants to do what he does and he understands why I need to do what I do. I think we’ve just given each other permission to do increasingly difficult and risky things. And I’m so grateful for that. I’m so grateful especially that he hasn’t wasted time trying too hard to protect me, because I think we spend so much time trying to keep the people that we love safe, that we actually diminish them. And I think I really am grateful that he and I have avoided that in our relationship.

Well, I didn’t initially decide on that. I’m a runner. First and foremost, I love the simplicity of running. And so I’ve always been incredibly inspired by the thought of just running over the horizon. I hate doing out and back runs because the second half is always boring. So I’m always so motivated to go round just the next corner. Just the next corner, just the next corner. So I had always been planning to do some massive run, and the idea of running around the perimeter of South Africa came to me and initially it was going to be a run. And, you know, there’s no one answer to the question: Why would you want to do that? I want to do it because I love running, it is the ultimate adventure, but mainly because I just love this beautiful country of ours and the thought of getting to sweat on every bit of its border. I wanted to go and check the perimeter and so initially the plan was that it would be a run. And then I did the maths and I realised that it was really far and that to run the whole way I would simply just take too long. I had five months in which to do it, because Peter had been gone for five months when he did his two rows. So I had basically a five-month credit balance in which to go and do my own expedition. I had to keep it to five months because if I didn’t, that would put Pete back in credit. I realised that running the whole way would just take too long. And that’s when the idea of turning it into a big triathlon, which would speed it up a little bit, came to me when I was running one day. And the idea of “Tri the Beloved Country”, came to me as the name for my expedition. And I took that as confirmation that a big triathlon around the border was the right thing to do -I think I’d almost been training for something like that my whole life. The idea had been brewing for a long time, and then I mixed it up a little bit and turned it into something that would fit into the five months.

On what she’s been doing since her last major adventure

Well, there are a number of things that I’ve been keeping myself busy with because my child has not been at school in the last decade. It becomes quite tricky to take months and months at a time off. So one of the things that I’ve done is with some friends of mine in the Eastern Cape, we started a wonderful initiative called ‘Wild Women on the Run’, where we train a group of women every year. We get them fit and ready to swim across rivers and run for days. And we normally run somewhere between 70 and 100 kilometres down the Wild Coast and raise large amounts of money. Not so much me, I’m really bad at that. But my friends and colleagues who join us are much more able to do that. So that has been the most wonderful thing that I’ve occupied myself with. I’ve also run a number of really long races, you know, 100 milers in a 400km non-stop race. We ran what is known as the pilgrimage run from Grahamstown to Knysna, which is a 600km run. So I’ve really been pushing myself with regard to distance. I’ve started adventure racing with my husband Peter and obviously in between one has to earn a living. But I suppose my real dream, my big goal, if my body is still up to it when my child finishes school, is really to run the length of Africa. So not the traditional Cape to Cairo route, which I don’t think is that exciting, but finding some astoundingly exciting routes to take through  Africa. That’s my dream. That’s what I would like to do next before I get too decrepit.

On what the money raised by her adventures is used for

When I did “Tri the Beloved Country”, the idea was to raise funds and awareness for a school in East London called the Carel du Toit Centre. It is a school that teaches children who are born profoundly deaf to speak to the world. The ‘Wild Women on the Run’ project has raised funds for the same two charities for ten years, and we’ve just added a third. The prerequisite for selecting those initiatives was that they should be local, they should be in the Eastern Cape, and they should largely benefit women and children. One is called African Angels. It is an absolutely world-class school on the rural outskirts of East London, on the Wild Coast side, where children from disadvantaged backgrounds are given a world-class education. The other one is called Busfare Babies, which is an initiative in Hamburg on the coast between East London and Port Alfred. Basically, it is run by a woman who is a midwife and who has started a programme in the area helping with antenatal and post-natal care. She became aware that many women literally gave birth in a taxi on their way to the hospital because it was impossible to get help locally and it was very difficult to reach somewhere where they could be helped. So we train midwives and set up an initiative in Hamburg that helps in those situations. And then our new charity is called The King’s Home, and is a programme that cares for abandoned children near Chintsa, just outside East London as well. These are the three initiatives the ‘Wild Women’ raise money for.