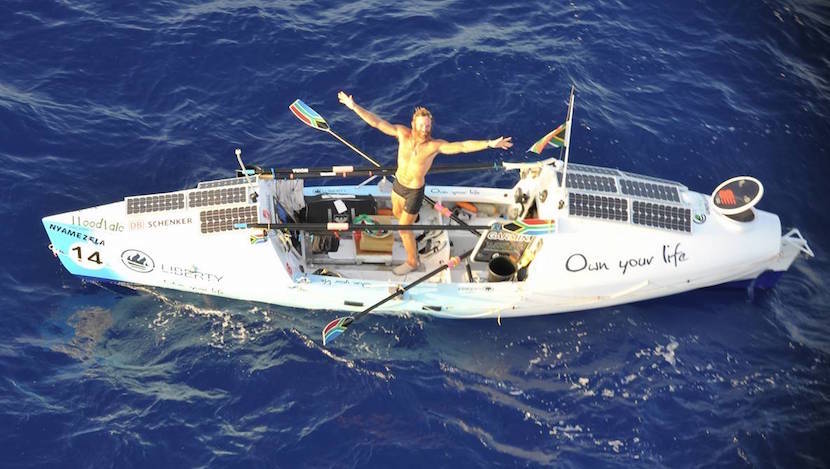 We present to the world as an awesome mix of DNA and environmentally influenced behaviour, but always at the very heart of our greater achievements lie choice, will power and passion. Here Gerard Finnemore, a Johannesburg clinical psychologist, uses a fascinating scientific behavioural study to understand how a South African whose endurance feats are legendary, yet doesn’t consider himself naturally resilient, succeeds. Resilience is an attribute ultra-long-distance walker and rower, Peter van Kets, has nurtured to full bloom through constant practice and sheer willpower, coupled with a deep love of nature at its most pristine. Which makes the take-home message all the more important; it’s available to everyone. You cannot change your genes, but you can affect the way they express, by way of lifestyle and nutritional choices. DNAlysis reports tell you in detail how to do that. Adopting a pro-social attitude is another proven behavioural ingredient. Inspiring stuff. The first step or paddle stroke? If you say you can, you probably will, and are you prepared to do what it takes to get what you want? – Chris Bateman.

If you can increase resilience (and reduce fear), new worlds open up that once were unavailable. But can you develop resilience? There are lots of self-help promises and Ivy League studies. But what’s the reality?

To find out we looked for someone with plenty of skin in the game but not necessarily a navy seal or the like.

No one can dispute that Peter van Kets has resilience. Amongst other feats like walking to the South Pole, he rowed on his own across the Atlantic in a seven-metre boat from the Canary Islands to the Caribbean. He rowed for 90 minutes then slept for 90 minutes non-stop for 76 days. And not once did he miss a shift. I think that qualifies as resilience.

What makes this intriguing is that Pete does not regard himself as being a naturally resilient person. He insists that he developed it and that this is available to everyone. Time for some serious fact-checking…

Pete regards his school career as nerdy and unremarkable, except that he attended eight different schools, ending up with three years at Camps Bay High in Cape Town. And with a view like that it’s hard not to develop a love of the sea, which is exactly what happened.

He recounts it was during his basic training during National Service that he started to realise it was possible to push oneself. Of course, in the army this is not always voluntary as anyone who recalls commands like sien jy daardie boom, is jy al terug! will tell you.

Some years before I had done a qEEG on Pete as part of some research into post expedition blues for a FEAT presentation. A qEEG is a kind of brain map that can be very useful in helping to diagnose and suggest interventions in complex psychological conditions.

In Pete’s case, his phenotype is what’s called the ‘busy brain syndrome’. They register a lot of beta wave activity. Beta is the EEG rhythm that your brain generates when it is actively doing something. Inevitably, these individuals are busy people who can find it difficult to switch off. For them, this is fine because they usually don’t want to. Problems can arise when sleep issues or burnout kick in. It is a phenotype defined by success rather than profession and I have found it in as diverse a subject as rock stars, inventors or hedge fund owners.

But there was something else that my California-based supervisor pointed out to me. Jay Gunkelman is credited with having analysed more than 500,000 EEG records. He found that Pete has a slight deviance in a part of the brain called the anterior cingulate. Simply put, this is like the gear lever of the brain. Amongst others, it facilitates cognitive flexibility, being able to change your mind.

When I told him what Pete had achieved on his Atlantic rowing trip, he laconically quipped that he doubted whether anyone could do that unless they had something not quite right in the anterior cingulate.

So, this got Pete thinking. He had always believed he did not have natural resilience and now he is being told that there is a cortical condition making resilience quite easy!

To resolve this, we decided to take out the big guns and look at Pete’s genetic profile. Genetic profiling looks at variations (which we all have) and is increasingly being used in healthcare to deliver personalised medicine, or in Barack Obama’s words, precision medicine. You could also just call it 21st century medicine.

The variations are called single nucleotide polymorphisms and are referred to as SNPs or ‘snips’.

For his interpretive skills, we turned to Pete Williams, clinical head of Functional Medicine Associates in London. The report we used was DNAlysis Mind which reports on a number of genes and their SNPs relevant to psychological traits. At the time we were not aware that the ever-innovative team at DNAlysis were in the process of developing another report actually called Resilience. Would this be the final arbiter of Pete’s claims about his own resilience?

Pete W immediately highlighted the gene involved in the action of oxytocin. Colloquially, oxytocin is called the ‘love drug’ because of its association with empathy, social bonding, sexual activity, reproduction, trust…you get the picture. Pete has the version that expresses these attributes most effectively (for the psychologists and HR professionals out there, his highest score on the Big Five personality scale is agreeableness).

Next came a gene called COMT, which helps to control the levels of neurotransmitters like dopamine and norepinephrine (called catecholamines) in the brain. You get a ‘slow’ and ‘fast’ version of COMT. The slow version causes higher levels of dopamine and the fast version, lower levels of dopamine. More dopamine means better focus and concentration but under conditions of prolonged pressure, excess catecholamines can give rise to a lot of anxiety. The opposite is true of the ‘fast’ version, which results in people who are good under prolonged pressure. Some call this the worrier/warrior hypothesis (worrier = slow version and warrior = fast version). Pete has the slow version and this almost certainly correlates with the busy brain syndrome described earlier.

Thus he has good concentration but is very susceptible to anxiety under pressure. Not the best for resilience! (For the neurophysiologists out there, his ERP P1 was 104ms against an age-related norm of 156ms.)

A lot of research gets done around COMT. For example, Olympic wrestlers tend to have the warrior version but Olympic swimmers tend to have worrier version (finding that the added focus and concentration brings dividends).

Also Pete W pointed out that Pete is prone to inflammation in his body. Not the best when you are undergoing extreme levels of exercise. This could contribute to low moods. Another gene (FKBP5) would create a heightened stress response and yet another – 1AHTR1A – would likely also contribute to a low mood, inhibiting the behaviour of serotonin. Pete W describes another – DRD1 – as inclining Pete towards ‘the glass is never quite full’ type of feeling.

Indeed, Pete W has some fascinating ideas that genes like the latter might well nudge one towards the development of passion, to ‘fill the glass’ or chase the blues away.

All in all, Pete W did not think that Pete is naturally resilient but that his healthy lifestyle, passion for the outdoors, good concentration and life-loving oxytocin gene would be a reasonable mix to overcome a lack of natural resilience.

So what did the actual DNAlysis Resilience report say? I was very fortunate to be able to discuss the outcomes with DNAlysis’ Helen Gautschi, co-creator of the report with Richard Sutton.

This report includes a number of genes we have already considered and then adds a whole lot more. In an initial version of the report, they included an algorithm that summarised all the findings into a final score (this has since been dropped).

Guess what? It also (politely) found Pete as having only ‘moderate’ levels of resilience!

Helen explained that resilience should not be narrowly defined, being more than just ‘grit’. It is the ability to overcome adversity or trauma in a positive way.

She noted that in addition to the oxytocin SNP that Pete possesses, he has another very favourable norepinephrine gene, yielding endurance and coping mechanisms, especially during adverse times.

But after that, Pete’s resilience genes all go rapidly south. His SNP on the neuropeptide Y gene could well trigger feelings of anxiety and low mood. The same goes for the BDNF gene. The CRHR would enact a disproportionately high stress response. On balance, the genes controlling the behaviour of serotonin might also predispose him to stress and low mood.

But as Helen is at pains to point out, one can negate the negative effect of these predispositions  – this is the whole point of genetic testing  – and echoing what Pete W said, this is clearly what Pete has achieved. So, the reality becomes your gene/environment interaction. Environment means lifestyle and nutrition. It is true you can’t change your genes but you can certainly affect the way they express by way of lifestyle and nutritional choices. DNAlysis reports tell you in detail how to do that.

Thanks to his healthy, outdoor lifestyle, plenty of exercise, prosocial attitudes, rich family life, wholesome food, he has been able to transcend what might have caused things to go in another direction altogether. Even though this is a single case study (n=1), it provides quite compelling evidence that resilience can be developed.

But I had one last question for Pete. Rowing 76 days across the ocean all alone, how did he manage, whatever the weather, to never miss a shift after 90 minutes of probably disrupted sleep and get out and row again for 90 minutes?

His answer is immediate. “It’s just a matter of how much you want something.” Passion ignites resilience and perseverance.