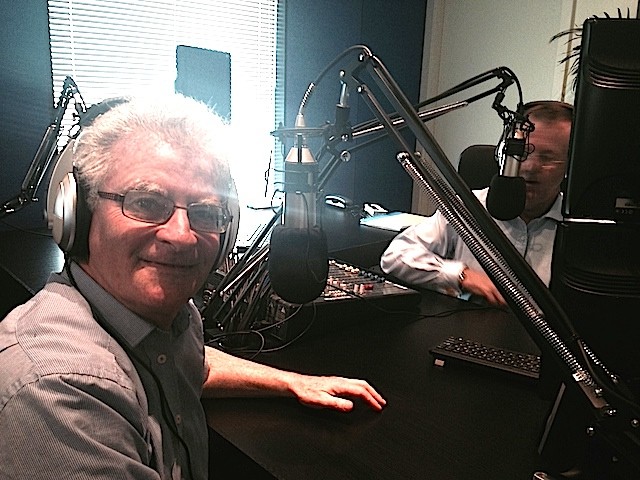 South Africa’s proposed new Black Empowerment codes (BBBEE) have become very personal for EconoBEE’s founder Keith Levenstein as his own company faces the dilemma confronting 83% of Qualifying Enterprises (turnover R10m to R50m): Sell/give control of your company to Black Owners or get downgraded to a level 8 (bottom of the pile) rating. In this interview he admits to not knowing what to do. Nor do his clients. Whatever transpires, these proposals make the ANC Government’s intention very clear. It is throwing legislative might behind forcing racial transformation of South African business ownership. A very blunt tool that is sure to have unintended consequences the bureaucrats have not even thought about.  – AH

ALEC HOGG: Keith Levenstein form EconoBEE is with us in the studio. The new BBBEE codes have come out Keith – for comment at this stage…

ALEC HOGG: And they are…what?

KEITH LEVENSTEIN: It refers to companies whose annual turnover is between R10m and R50m.

ALEC HOGG: So up to R10m turnover, you’re clear. There’s no real application of BBBEE, but between R10 and R50m turnover, this is where the essence of these new codes come in.

ALEC HOGG: And what the practical implications of that?

KEITH LEVENSTEIN: Firstly, it means that all QSE’s – that requirement – are going to have to follow all five elements of the Amended BBBEE codes, which include ownership, management control, skills development, preferential procurement, (which is now called Enterprise and Supply Development), and socio-economic development. On the old codes that we’re currently working on, a QSE could choose four out of the seven elements. Now, he has to choose all five elements, which obviously includes the controversial ownership aspect.

ALEC HOGG: That’s a big change. What has motivated it?

KEITH LEVENSTEIN: I think a lot of it is because Government is seeing that there has been some fronting taking place. At the same time, see that…

ALEC HOGG: What is fronting?

KEITH LEVENSTEIN: Fronting is quite simply, misrepresenting your BBBEE status, stating that you meet a particular condition or you have a BBBEE Level, and you don’t. It’s usually around ownership, but not necessarily so.

ALEC HOGG: All right, so you’re now going to try to remove fronting by bringing in codes that are draconian. That seems a little counterintuitive?

KEITH LEVENSTEIN: In our opinion, it’s going to encourage more fronting because the codes are so much more difficult to achieve. We have done our own calculations since Friday and we find that some white-owned companies, who are Level 2’s are going to end up being Level 8, bearing in mind that the best level is Level and the worst level is Level 8 or else, non-compliant. The sad thing is I think many QSE companies are going to end up not bothering to comply because they won’t get a scorecard. It’s now becoming quite difficult.

ALEC HOGG: How many white-owned companies would fit into that area/category – roughly? What percentage of companies in that category would be white-owned?

KEITH LEVENSTEIN: Some of the research that I’ve done shows that something like 83 percent of all companies who have a QSE scorecard, have ownership of less than 51 percent, so a huge percentage of companies that are white-owned.

ALEC HOGG: So let’s understand that. Eighty-three percent of the companies that turnover between R10m and R50m in South Africa will have to change their way of doing business because of these new codes.

KEITH LEVENSTEIN: That is correct.

@alechogg A black importer with 0 staff will rate higher than a white manufacturer with 300 staff. Where is the job creation in that?

ALEC HOGG: One the one hand, if they want to break the moral code (if not the legal code), they can adopt fronting. They could adopt black shareholders who are not effectively shareholders. On the other hand, if they don’t do that…if they try to follow the codes and they become Level 8 as you were saying a moment ago, what happens to their business?

KEITH LEVENSTEIN: They’re going to lose their competitive advantage. Our Minister for Small Business Development has always been speaking about it. The reason we have that Ministry is to try to encourage the growth of small businesses. We want to encourage small black businesses, but we also want to encourage (and not demotivate) small white businesses. In fact, we want to create many small businesses. For example, if my business becomes a Level 8, I won’t have a competitive advantage over some of the larger consulting companies who are generics. Many other QSE will have exactly, the same problems. They won’t be supported as much by the large businesses as they used to be.

ALEC HOGG: Just explain that. Currently, smaller businesses because of the BEE have an advantage and are more competitive than the bigger businesses. In future, you’re saying that they’re going to lose that advantage.

KEITH LEVENSTEIN: They will lose some of that advantage. Many of the larger businesses are currently Level 5’s or Level 4’s, whereas the QSE’s are Level 2’s and many of them are Level 1’s, so that has always encouraged big business to try to support small business, which was what the codes wanted. If all the QSE’s end up being the same or a worse level than the larger businesses, there might not be as much incentive. There still is a form of incentive in the procurement regulations but not as much, which means that it will hurt the smaller business. I’ve always been keen on small business. I have a small business, so I’m seeing that many small business owners are going to end up just giving up or as you say, doing the worst/bad thing, like fronting.

ALEC HOGG: Where do you fall in your business? Are you a QSE?

ALEC HOGG: So what are you going to do?

KEITH LEVENSTEIN: At the moment, I wish I could tell you exactly what I need to do. We will have black ownership because it makes sense to me to do so. We’ve earmarked people who are genuinely going to add a contribution to our business, even including our staff so it’s absolutely perfect, but for me to say I’m going to sell percent right now, is a rather a big decision and I’m running out of time.

ALEC HOGG: But you need to sell 51 percent and not just 25 percent if you want to get an advantage or retain your advantage.

KEITH LEVENSTEIN: If I want to get automatic compliance, then 51 percent is what I need. If I sell 25 percent of my business then I have to follow the scorecard, which is a bit more onerous, but I can still get to round about Level 3 – maybe Level 2 if I work really hard. It just becomes a bit unfair in a way that I go through the whole process of getting a scorecard and get to Level 3 whereas if I had 51 percent black ownership, I could just dispense with the good things I’m doing – as are you and probably other companies – to skills development. I currently have two staff who are doing their degree/diploma courses. One guy is doing his MBA and I’m thrilled about that and yes, I’m going to be rewarded for it, but it will be very nice not to lose the benefit. I think many companies are going to end up deciding ‘why should we bother’.

ALEC HOGG: Its early days, but your clients would have known something like this is coming. What has their feedback been?

KEITH LEVENSTEIN: We did. I don’t have that much feedback from our clients at the moment. We knew that there was going to be the priority element and the five elements that we had to follow. What has upset me slightly is the QSE codes are measured out of 118 points, including bonuses. This means that in order to get to your Level 2 (95 points), you can afford to lose 18 plus five (23), whereas what we would like to change is the current QSE codes are measured only out of 100 points.   If I therefore lost just five points, I’m down to that 95. To some extent, we have an opportunity of talking to government. They’re asking for public submissions and we should give those public submissions. To some extent, we have to say small business.

We’re on our own. We can’t rely on the big Chambers of Commerce and big business to support us.

We ourselves (and small business tend to be very good at ignoring issues)… Look at how we ignored the e-toll issue.

ALEC HOGG: But there’s no time. That’s the problem. An entrepreneur is already going 18 hours per day. They don’t really have time or don’t believe they have time that they can set aside to deal with these kinds of regulations.

KEITH LEVENSTEIN: Yes, that’s even worse. The Minister’s done something that I think, might be against the Act. In the first place, he’s given us 35 days to comment. The Act itself says that when the Minister issues a draft, he must give the public at least 60 days to comment, so he’s given us too little time. Possibly, because it’s a mistake or maybe he chose to reduce the time to make it more difficult for us to comment.

ALEC HOGG: Keith, is all of this constitutional? I ask this because there’s now a Fund that Mark Shuttleworth has established, which will allow those people who perhaps don’t like the social engineering to take it to the Constitutional Court.

KEITH LEVENSTEIN: The alternative might be… If we can mobilise enough people to suggest better alternatives to the department, they might listen. They do sometimes listen. 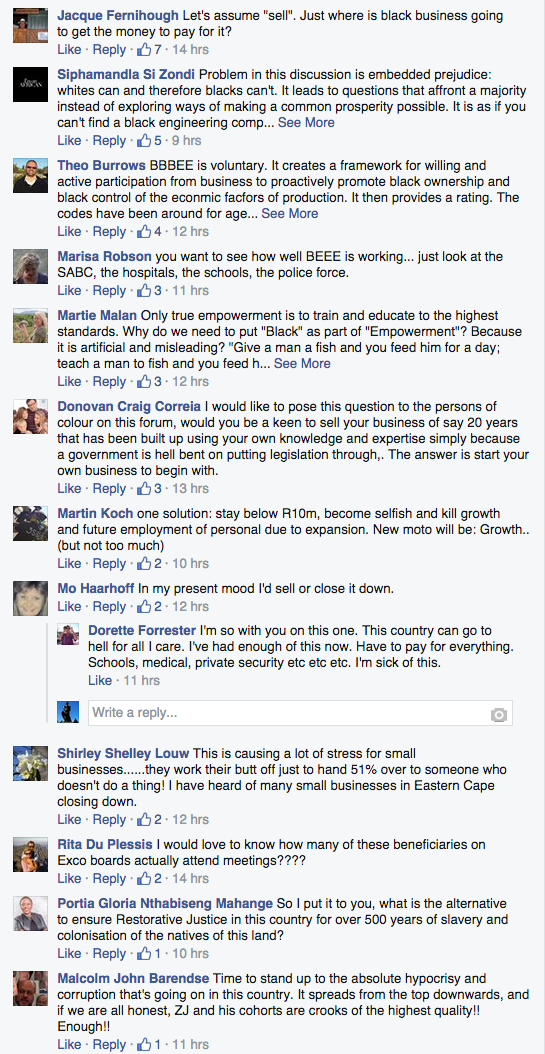