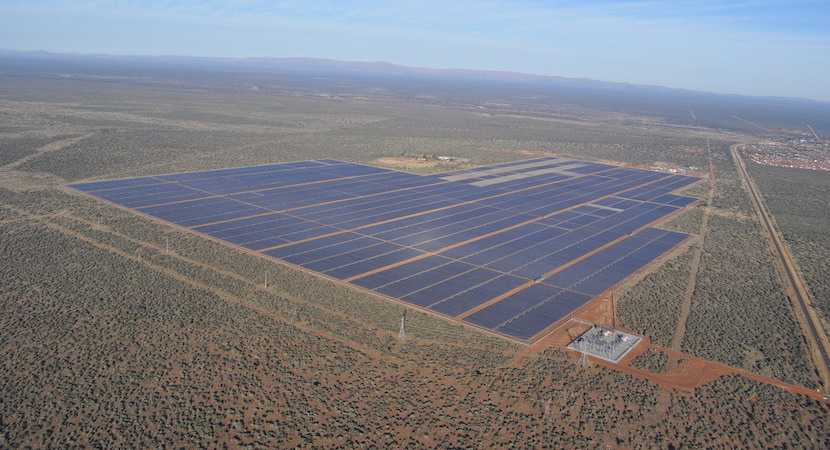 South Africans were caught off guard recently when Eskom announced the implementation of load-shedding. With more disruptions likely to occur in the next few years, perhaps the time has come to look at concentrated solar power (CSP) technologies to provide electricity when coal power stations fail.

“Mass deployments of CSP will not only provide clean and supporting energy to the grid, but will boost the local manufacturing of CSP components, support job creation and also create an avenue to export excess electricity and know-how to neighbouring countries,” says Dr Toyosi Craig, a Project Manager with AEE Power in Sandton, Johannesburg. He recently received his doctorate in Industrial Engineering at Stellenbosch University (SU).

Craig’s study sought to identify the key factors and forces pertinent to the development of CSP technology and to come up with a strategy and framework to accelerate the adoption of this technology in South Africa.

He used different methods and analyses to gain a better understanding of the state of CSP in the country and efforts to aid its adoption; to identify the most sensitive factors affecting CSP adoption, the fears, challenges and limitations in this regard; and to present possible ways to overcome them.

“I used different methods to address the knowledge gap in the innovation and adoption analysis of CSP in terms of cost, progress ratio, learning effect, technical, non-technical, social, trade and economic impact.”

Craig says there is a lack of information regarding the impact of CSP technology on South Africa’s trade and local manufacturing industries, as well as on local research, development and innovation communities.

“My study is important because recent events have shown that the future of CSP in South Africa looks bleak as the government’s recent Integrated Resource Plan (IRP) updates gave no allocation to new CSP plants beyond 2030. At the moment, there are no plans to build new plants until 2030.

“This is worrying given that South Africa wants to generate 42% of its electricity from renewable energy technology sources by 2030.”

Craig adds that his research serves as a framework for the improvement and deployment of CSP technologies, which in the long run is expected to lead to a reduction in cost and tariffs of CSP technology and improve its competitiveness with other renewal energy technologies.

“I found that if CSP is promoted, job losses due to the adoption of renewable energy will be reduced as experts from other conventional technologies can transfer their skills with little or no training.”

“The cost of developing CSP is reducing, the technology is therefore going to be the major energy source of the future, and the nations who do not recognise these may lose out.”

Craig does point out, however, that despite its storage ability and capability to supply uninterrupted power for 24 hours, electricity from CSP is still more expensive than other renewal energy technologies (RETs). He adds that one of the reasons is less installed capacity compared to other RETs and limited adoption and deployment strategies.

Craig explains that there are two types of technologies through which solar energy has been deployed to generate electricity in South Africa: solar photovoltaic (PV) and concentrating solar power (CSP) technologies. The former refers to technology that turns sunlight into electricity through solar panels, while CSP turns solar energy into heat to drive turbines to produce electricity just like other conventional power plants.

Craig says that despite the available amount of sunlight in South Africa, electricity generated from solar energy is only a small percentage of the overall energy mix.

“Given that Eskom is under pressure to provide electricity, the Department of Energy (DoE) should let all renewable energy technologies compete fairly and justly. The DoE should also encourage the localisation of the CSP technology as this will boost the ability to maximise profit in the CSP innovation cycle.”

Referring to previous studies, Craig adds that the potential to harvest South Africa’s abundant sunlight through CSP has been proven.

“With CSP technology, the power from the sun can be used for heat and electricity anytime of the day, even when there’s no sunlight. We are desperately in need of new/cleaner baseload and CSP seems to offer the way forward. This technology operates well on large scales and the more we adopt it the cheaper it becomes.”

Unfortunately, South Africa doesn’t have many CSP plants despite the fact that in 2010 CSP was one of the major renewable energy technologies prioritised by government, says Craig.

“Apart from Helio 100, a 100 kW demonstration plant at Stellenbosch University, there are four plants (KaXu, Khi, Xina and most recently Kathu) connected to the grid in the Northern Cape with a few others under development.”

He says even though the adoption of CSP technology has been slow in South Africa because of political interest and global trends, high capital cost and tariff and politicians’ lack of understanding of the values of CSP technology, the process can be accelerated through improved research, development and demonstration plants.

“The improvement of research and development will also create platforms through which CSP can be hybridised with other renewable energy technologies to cause a drastic increase in the rate of CSP adoption.”

“Strategic policies, laws and the right funding for research can help South Africa to fully maximise its CSP resources potential to foster cost reduction and market viability of its solar innovations.”

Craig adds that government should encourage the participation of local industries by raising the number of megawatts apportioned to CSP in the Renewable Energy Independent Power Producer Procurement Programme as this will increase competition and ultimately reduce the tariff cost.

He believes South Africa can become a global leader in the manufacturing of CSP technology and CSP related services.

“However, for this to happen, CSP must be allowed back in the IRP,” Craig adds.

He says the general public, academics, policy makers, consultants and independent power producers, among others, would benefit most from his research.