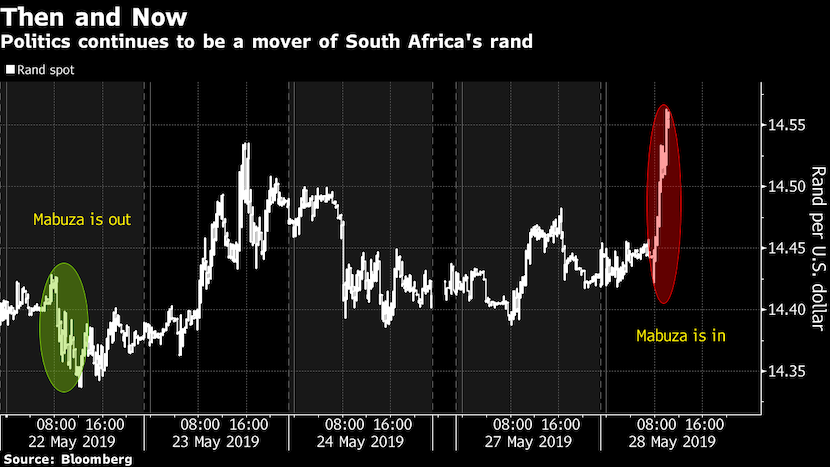 As investors speculate who’s in and who’s out in President Cyril Ramaphosa’s cabinet, due to be announced this week, the market is clear on one contender. When David Mabuza appeared to rule himself out of being re-appointed as deputy president last week, the rand gained. And now that he seems set to be re-appointed to the post, the currency is heading the other way.

Mabuza, 58, was linked to a succession of scandals while he served as premier of the eastern Mpumalanga province, though he denied the allegations and has never been charged. Still, his reappointment could set back Ramaphosa’s efforts to repair the reputational damage to the party after his predecessor Jacob Zuma’s scandal-marred nine-year rule.

“Investors worry that Ramaphosa will not be able to root out corruption from the top echelons of the government as promised, endangering his reform agenda,” said Per Hammarlund, the Stockholm-based chief emerging-market strategist at SEB AB. The rand could reverse declines if Mabuza shows commitment to reform measures, he said.

The rand weakened 1% to 14.5761 per dollar by 10:28am in Johannesburg, leading emerging-market currency declines. Yields on benchmark 2026 government rand bonds rose four basis points to 8.43%.

“Buy the rumour and sell the fact is in full effect right now,” said Wichard Cilliers, a trader at TreasuryOne Ltd. in Johannesburg. “It’s putting the rand under pressure because investors thought there was a chance that the cabinet would be cleaner. But we need to see the official news about Mabuza, the real deal about what his role will be.”