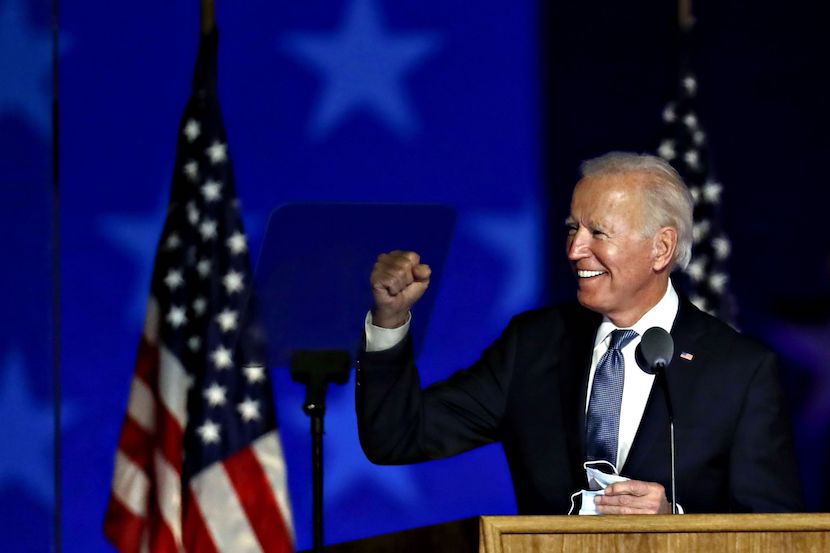 By Jennifer A. Dlouhy

(Bloomberg) — President-elect Joe Biden and his team will begin to delve into Donald Trump’s coronavirus vaccine planning and assess the condition of federal agencies after the president relented and allowed the transition planning to begin.

After weeks of inaction, the chief of the General Services administration acknowledged Monday that Biden was the “apparent winner” of the November 3 election. The shift came after the key swing state of Michigan certified Biden as the winner, at least nine Republican senators called for the transition to begin and the Trump legal team suffered fresh setbacks.

Trump made clear that he wasn’t ready to concede, but the GSA’s declaration gives Biden and his team access to current agency officials, briefing books and other resources, including some $6 million in funding. “In the days ahead, transition officials will begin meeting with federal officials to discuss the pandemic response, have a full accounting of our national security interests, and gain complete understanding of the Trump administration’s efforts to hollow out government agencies,” Yohannes Abraham, the executive director of the Biden-Harris transition, said in an emailed statement.

Trump suggested that he gave GSA Administrator Emily Murphy permission to authorize the transition. “I am recommending that Emily and her team do what needs to be done with regard to initial protocols, and have told my team to do the same,” Trump said of Murphy. He added, however, that he would continue to contest the election’s outcome, a campaign that he has pursued with barrages of lawsuits and demands for recounts in several battleground states.

Murphy sent a letter to Biden authorizing the formal transition as state and federal courts continue to reject legal challenges by Trump campaign lawyers.Party stalwarts on Capitol Hill and Trump allies elsewhere had remained largely silent as the president angrily vowed to undo the results of the election. But with the party facing the possible loss of the Senate in two January runoff elections in Georgia, more and more have been saying in public what had been discussed in private.

And Stephen Schwarzman, Trump’s most high-profile supporter on Wall Street, said it was time for the president to accept that he lost.

Read also: Why US election results are taking so long – With insights from Wall Street Journal

“Because of recent developments involving legal challenges and certifications of election results, I have determined that you may access the post-election resources and services described in Section 3 of the Act upon request,” Murphy said in her letter to Biden, citing the Presidential Transition Act of 1963.

For weeks, the Biden transition team has worked informally to establish a new administration, including assembling a coronavirus task force and consulting with public health officials outside of the federal government, mimicking the approach former Vice President Dick Cheney took during the disputed 2000 election.

Blocked from interacting with federal agencies, Biden’s staff instead sought out other experts from academia, state governments and Capitol Hill.

The biggest change now is that transition aides will be able to flood more than 100 agencies to prepare the way for his administration. They will have access to staff and briefing books assembled earlier this year, as well as information on what administrative issues must be addressed right away.

They also will get details about which positions are most critical, as the incoming administration seeks to fill more than 7,000 jobs across the federal government.

“Fortunately, federal career civil servants have done an outstanding job preparing for this year’s transition by producing fact-based information on critical agency issues and by designating acting officials who will lead agency operations until new political appointees are confirmed,” said David Marchick, director of the Center for Presidential Transition. “They now need space to do their jobs.”

Biden and Vice President-elect Kamala Harris may also soon begin receiving classified intelligence briefings. Lawmakers and national security experts had warned that without the information, the incoming administration was being kept in the dark about threats to the U.S. — a lapse that could make the country more vulnerable.

Biden’s team can now dig into work essential to running the government and bolstering the economy, from developing a budget proposal to coordinating unemployment benefits guidance with the Labor Department.

Executive agencies working on the pandemic response can also brief the Biden team on the systems for distributing protective equipment and coronavirus vaccines.

Signs of the formal transition were on display Monday evening. Within hours of the GSA’s decision, the Biden-Harris transition website had relaunched under a .gov domain.

A Defense Department spokeswoman, Sue Gough, said in a statement that the department had been contacted by the Biden-Harris team and “DoD is prepared to provide post-election services and support in a professional, orderly, and efficient manner that is befitting of the public’s expectation of the department and our commitment to national security.”

Trump’s chief of staff, Mark Meadows, said in a memo seen by Bloomberg that the White House would “comply with all actions needed to ensure the smooth transfer of power.”

But he warned that “unless specifically authorized,” people who work in the Office of the President “are not permitted to speak directly with a member of the Biden transition team or the federal transition coordinator.”

Although they are typically known as “agency review teams,” the Trump transition referred to the groups of advisers as “landing teams,” and in 2008, the first wave of Obama officials were called “parachute teams” — language that evokes a kind of military campaign.

Whatever they are called, the advisers that are deployed to agencies and departments are in fact on a mission: To identify key positions that must be rapidly filled and policies that require immediate attention while smoothing the handoff to the incoming administration.

The influence of advisers who enter federal agencies before Inauguration Day only goes so far. After the 2016 transition, some Trump landing team members complained their policy recommendations were ignored.

Biden’s advisers can count on visits from career staff bearing slide decks, “glossy reports and free advice,” said Tristan Abbey, who helped guide the Trump administration’s transition at the Energy Department in 2017. Civil servants will offer tips on saving time and money, Abbey said, while every agency office “is jockeying for its position in the new order of things.”

The career employees they encounter — who may have spent years working in agencies long before the arrival of Trump’s appointees — might have insights and details critical for an incoming administration seeking to make a sharp pivot. They can offer guidance on projects that were sidelined and work that might have continued quietly even though it conflicted with Trump’s public priorities.

Abbey, a former National Security Council official and Senate Energy committee aide, said the message to career staff is simple: “We represent the president-elect, so tell us everything we need to know and don’t surprise us.”