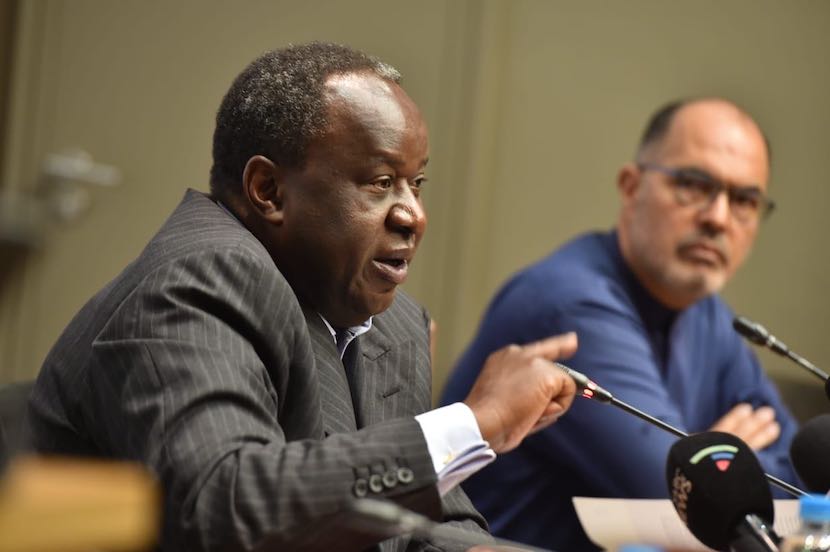 For a horrible few minutes ahead of this afternoon’s pre-MTBPS press conference, I fretted that my early start had been in vain. Finance minister Tito Mboweni had been delayed in a meeting, the dozens of assembled reporters were told. Apologies, but he’ll be with you just as soon as he can.

Had the independently-minded Mboweni finally pushed the envelope too far? I’d been scouring his speech in the Parliamentary “lockup” since early in the morning and found plenty that was sure to get up some very important noses. So was Tito finally being told to re-write the speech – even abandon it?

If a last minute confrontation was indeed the reason for Mboweni keeping us waiting for 50 minutes, there was no hint of it when he and entourage finally did appear. What followed made the official speech appear positively tame.

“If they want to call me a neo-capitalist for doing what needs to be done, let them. As long as it works…” Tito opined. And launched from one politically incorrect assertion to the next, trying his best to impress on all and sundry that the time for dogma and ideology was over.

Only those who are privy to the Presidential inner sanctum will know for sure what’s been going down these past few days. But after Pravin Gordhan’s pragmatism yesterday and Tito Mboweni’s powerful message today, something most definitely has shifted.

It reminds me of an interview many years ago with a Goldman Sachs executive who was previously Spain’s finance minister. He explained that the politically powerful had known for decades what needed to be done to drag Spain out of its economic quagmire. But they kept postponing the tough calls because it would have meant their ejection from power.

Spain’s economic miracle, he said, came courtesy of joining the European Union. Overnight the politicians had something external to blame – and were able to force the bitter medicine onto Spanish citizens by explaining it was the cost of EU membership.

The awful state of South Africa’s national finances could be its equivalent of Spain’s “EU”. Its sluggish economy desperately needs restructuring to boost employment – and the national finances require bolstering through the sale of cash-guzzling State owned enterprises.

In an entertaining press conference and his speech to Parliament, Mboweni laid out the case for pragmatism. Just like Gordhan the day before. And their boss has been doing for some weeks now.

If so, Mboweni might have nailed it when he said this is the end of winter. The cupboard may be bare. But in nations as well as our own lives, hitting a rock bottom is often the pre-requisite to a change that rejuvenates.