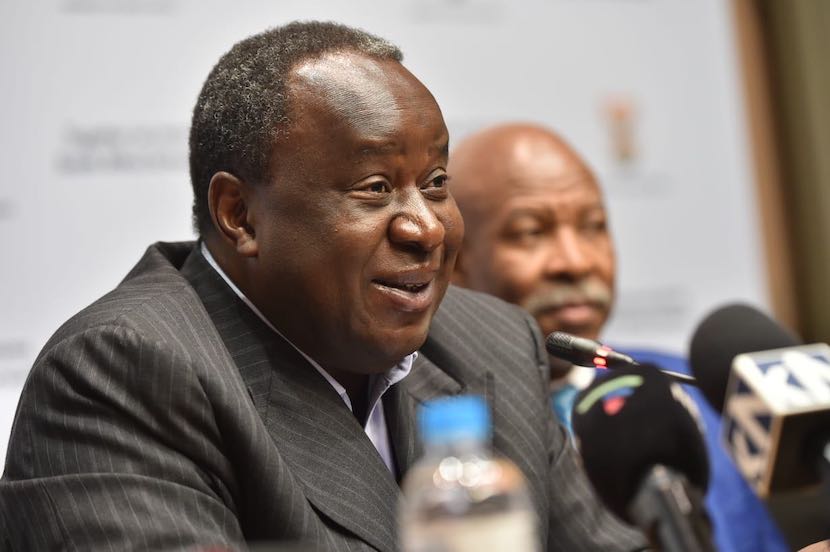 Never since its introduction by Trevor Manuel in December 1997 have SA citizens been dropped quite so depressing a “mini Budget” – sorry, the Medium Term Budget Policy Statement (as we were reminded again this afternoon).

We’re now almost two thirds of the way into the current fiscal year so the numbers for the 2019/20 fiscal year are firming up. Treasury today projected tax collections will be a staggering R53bn below what had been forecast in the main Budget eight months back. Although it’s well within the R60bn being widely predicted, it’s still a record shortfall.

The dreaded financial crocodile jaws have been opened wider by spending that is now projected to end R23bn higher than February’s national bookkeeping exercise. Blame that on Eskom, which required emergency funding of another R26bn on top of the R23bn which had already been allocated in February.

Outside of Eskom, there was an additional un-budgeted R10.8bn required to keep other state owned problems alive – South African Airways got R5.5bn; SA Broadcasting Corporation R3.2bn; Denel R1.8bn and SA Express airline R300m. Fortunately Treasury was able to offset all of this through cost savings elsewhere.

Alec will present his findings from today’s Medium Term Budget Policy Statement with a webinar this evening at 7pm allowing you to pick up the highlights from the comfort of your own home. Courtesy of BrightRock’s sponsorship, it’s free, but you must register beforehand – click here to do so.

The result is that this year’s Budget Deficit is now slated to come in at 5.9%, from the previously estimated 4.5% and last year’s 4.3%. That gives the country similar financial ratios to Pakistan and Argentina. Something about which straight talking finance minister Tito Mboweni urged Parliament that “Clearly we need to do things differently – there is no status quo option.”

To be fair to Mboweni and his number crunchers at Treasury, eight months ago they had no way of knowing that Eskom would need the additional emergency funding of R26bn – or that energy disruptions would send the economy into a tailspin where growth is now slated at a third of the previously anticipated 1.5%.

If there was ever any doubt among South Africans about how critical it is to get Eskom functioning again, here it is. As Mboweni’s cabinet colleague Pravin Gordhan told the nation yesterday when unveiling the Eskom Road Map, the national embarrassment simply has to be fixed. Eskom is simply too big to fail.

Some pundits were expecting Mboweni to use today’s Medium Term Budget Policy Statement to shuffle part of Eskom’s R441bn debt onto the Government balance sheet. He didn’t.

Instead, Mboweni told Parliament those discussions on debt forgiveness would only begin after Eskom’s directorate and management show an “irrevocable commitment” to implementing the Ramaphosa Administration’s decisions.

In his words: “We cannot continue to throw money at Eskom. For the sizeable support required, it cannot be business as usual.”

He wants to see more efficient running of the Eskom power stations; improved cash management and a fast tracking of its split into separately governed and managed Generation, Transmission and Distribution company.

With the expanded Budget Deficit, a dire forecast on the Debt-to-GDP ratio heading to over 70%, and the Eskom travails, you needed to dig deep into Mboweni’s 4,200-word speech to find anything approaching good cheer.

But in a private word after his entertaining and informative press conference (a world away from the unlamented predecessor Malusi Gigaba) he suggested that SA will be OK – provided it focuses on getting long ignored basics right, and concentrates on its sweet spots like tourism.

In Parliament this afternoon, just as in February, he used an Aloe Ferox plant to illustrate the situation. For Mboweni, although the famously resilient plant is still struggling, “we stand here at the end of winter.”

He also tabled version two of his much-debated Economic Transformation Plan, describing it as “not a dogma, but a guide to action.” This is the plan that speaks to a country that needs to get the basics right with some quick wins already evident.

Much abused SA Revenue Services, too, is “emerging from its own winter.” New Commissioner Ed Kieswetter, who was at the presser sporting a Madiba shirt and fashionable stubble, was praised for having taken steps to rapidly re-invigorate SARS, including the re-establishment of the Large Business Centre and litigation, integrity and compliance units.

Another reason for hope is a harkening back to the Manuel era where the starting point was to achieve a balanced budget.

Mboweni is mindful that demands on the fiscus from Eskom will continue for at least the next decade, so is aiming at 2022/3 for a “primary balanced budget” for the state spending excluding interest servicing. That will require an annual R50bn off spending over the next three years. He’s also keen to see the debt-to-GDP ratio, pulled back to the 30% of the pre-Zuma era.

A disappointment was Mboweni’s first swing at innovating his way to lower State spending when he began targeting a particular bugbear that reaches back to his days as SARB Governor: the excessive growth in the public sector wage bill.

Mboweni expected substantial savings from the carrot of offering penalty-free early retirement for public servants. But with less than 4,000 of them taking the option, the wage bill saving was nowhere near the annual R12bn expected. But he will be giving the idea another crack.

The finance minister is also applying the stick, disclosing to the nation that 29,000 public servants earn over R1m a year. Treasury published six pages of tables and graphs that leave little to the imagination about the runaway train that is public sector remuneration. 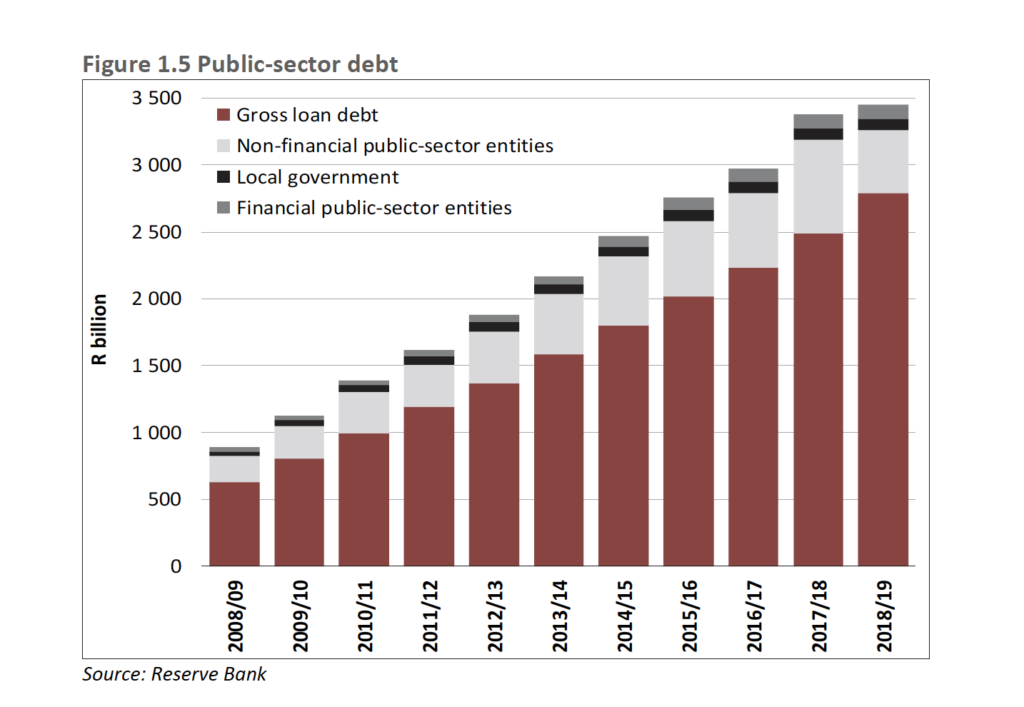 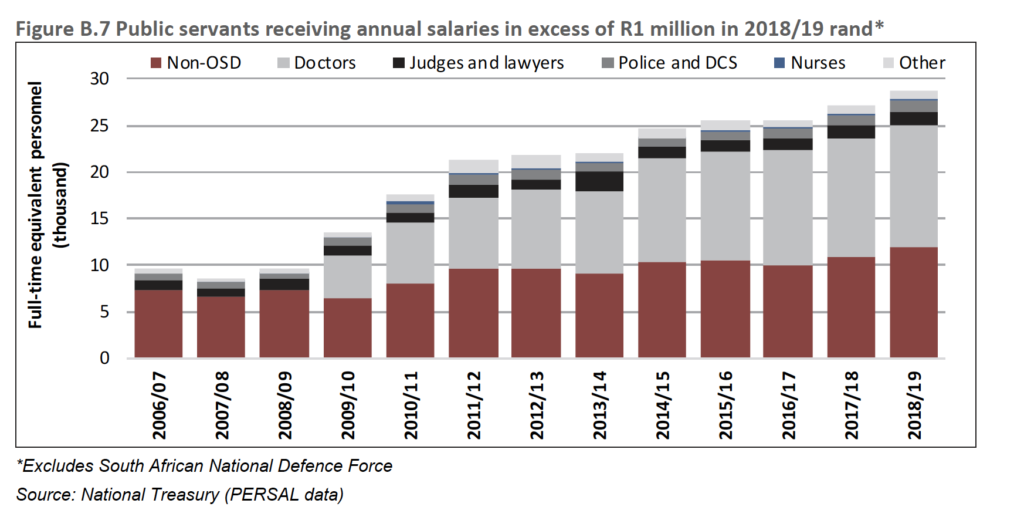 The report, published as Appendix B in the official MTBPS, discloses that in the last fiscal year 35% of total state expenditure went into the pockets of its employees – and that this sector of the Budget has grown faster than any category of state spending barring interest on debt. Growth is due to escalating salaries rather than additional workers.

In the 12 years to March 2019, State salaries trebled from R154bn to R518bn with a hefty R159bn of this due to inflation-beating salary increases.