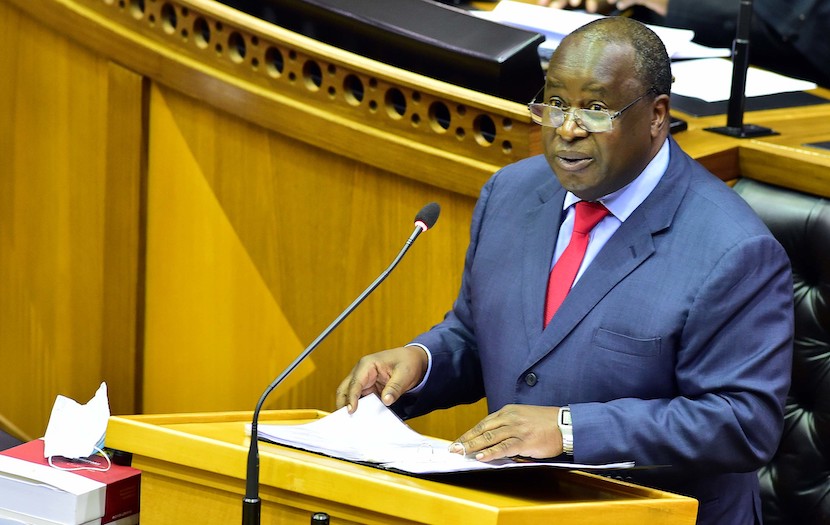 South Africans are still reeling after Finance Minister Tito Mboweni’s 2021 Budget speech delivered to Parliament. Despite the really poor news being peppered with snippets of good, citizens are sceptical at best about what the ANC can achieve in the next year (and beyond).

Of the more upsetting announcements, we learnt the true cost of Covid-19. The pandemic (and its related lockdowns) has dealt the economy a devastating R230bn blow. Debt-to-GDP is now at 80% and SA’s unemployment rate is sitting at a whopping 32.5%. The successful 12J scheme has been scrapped, which not only helped start-ups but generated significant business growth as well.

Mboweni warned that public finances are “dangerously overstretched” and that SA will need to borrow well over R500bn each year. Other crucial reforms include fixing Eskom and a faster roll-out of vaccines to help contain the virus (and prevent future lockdowns).

As such, more money has been allocated for Covid-19 vaccines, and Mboweni has vowed to freeze state workers’ wages – a massive drain on state funds. Corporate tax has been slashed by 1% from April 2022, and Treasury has also insisted that no further cash will be set aside for South African Airways.

While there are opportunities for hope, BizNews community members feel it’s a show they’ve seen before.

Goodluck with that R10.3 Billion when there’s still no trace of the R500 Billion. #BudgetSpeech2021

“Just accept that nothing good can come from the ANC. They are a communist African liberation movement – history tells you that they will always disappoint you because they don’t have the capacity to do anything else. Believing anything they say is like hoping that a heroin addict will actually do what he promises this time,” writes Oh Boy. 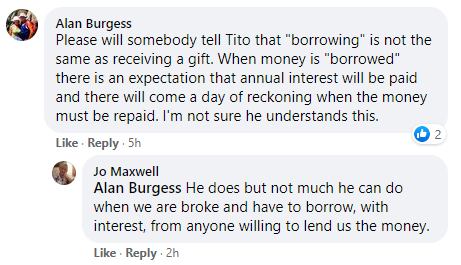 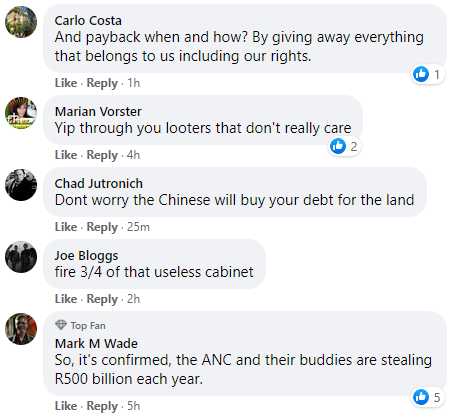 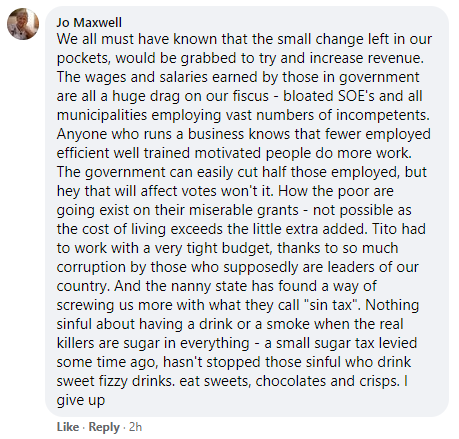 Jared van Niekerk says, “People conveniently forgot that Squirrel sat watching for a decade as the Guptas and JZ783 bled the country dry, but didn’t lift a finger. He’s just as bad and corrupt as the rest of them.” 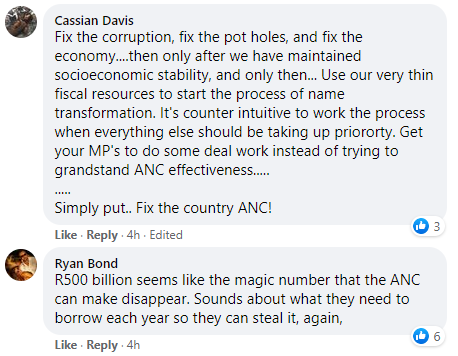 According to Fred Perry, “the buffoons running the asylum don’t know how to fix anything – let there be no misunderstanding here!”

“It goes without saying that our government has absolutely no clue how to run an economy (or anything else, for that matter) successfully,” says this Concerned Citizen. 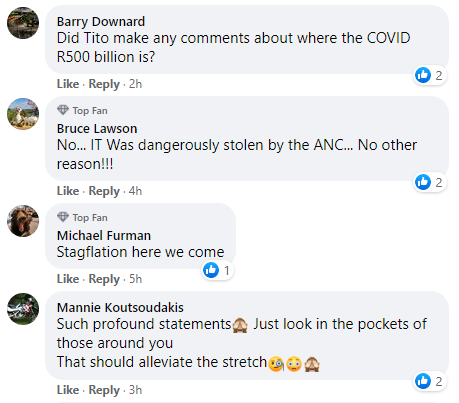 Read also: 2021 Budget in graphs: An uphill task lies ahead

“Going forward, I expect South Africa’s purchasing power will continue to diminish as a result of rand weakness and soon higher inflation. I fear that we are in for a very rough ride this decade with greater inequality, unemployment, social unrest and instability to come,” says Mark Andrews.

The Finance Minister proudly announced this would not be an austerity (cost-cutting) budget.

These guys have no idea what they are doing.#BudgetSpeech2021 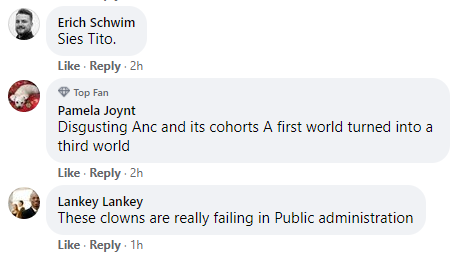 Is no longer fun to be a South African, increase in the cost of living while a decrease in job and business opportunities. We are slowly becoming like Zim.😔 Tito Mboweni #BudgetSpeech2021

Why must politicians and so-called ‘public servants’ be earning millions while almost 11.2 million South Africans are without jobs or the hope of finding a job?

“We owe a lot of people a lot of money” @tito_mboweni

That is what happens when you steal! Loot! Mismanage and appoint incompetent people to manage your money! #BudgetSpeech2021

I listen to this #BudgetSpeech2021, with all its ambitious strategies & priorities. In truth, the biggest question is not whether @MYANC cadres are thinking of looting those billions, it’s how much they’ll get away with. Again.

Andrea sums up the situation as follows: “ANC cadre. Listen well. You do not create jobs. You are killing jobs because you have no idea how an economy works. Your job is to create a regulatory framework that removes the government as much as possible, so the private sector can create jobs. Is the last 26 years not enough to teach you that your ‘model’ – state control, is NOT working? What else do you need to convince you? Stupid, stupid, stupid.”

“Clean house! From top to bottom. That’s all I have to say,” concludes Zeph.

For all the 2021 Budget news, download the BizNews PDF here – https://bit.ly/3bzqLWN