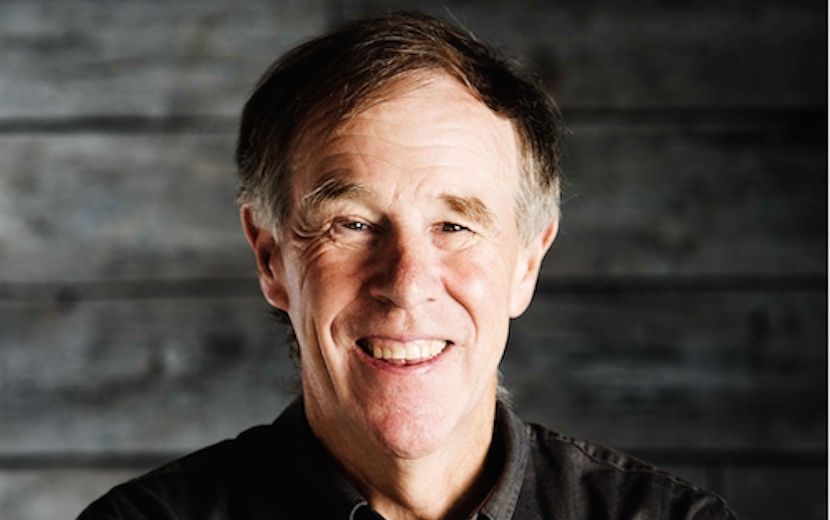 Tim Noakes is South Africa’s best-known sports scientist. He survived a gruelling legal battle over four years to defend his belief that a low carbohydrate, high fat diet is better for your health than a high carbohydrate, low fat diet. Noakes won his case in 2017, and then wrote a book called the Lore of Nutrition, exposing the medical and scientific code of silence that exists in the world of nutrition. Kate Wand is a member of PANDA (Pandemics ~ Data & Analytics) and the author of this excellent article in defence of Tim Noakes. Wand draws parallels between Big Food and Big Pharma and the respective pseudoscience implemented and forced upon us in order to protect them. – Nadya Swart

The Lore of Covid

“My scientific conversion came about after what I call my ‘Damascene moment’. It happened after I came face to face with compellingly robust evidence that contradicted everything I believed was true about optimum nutrition to treat and prevent serious diseases, such as obesity, diabetes and heart disease. I started to question whether much of what my professors at medical school had taught me as incontrovertible nutrition truths were, in fact, no more than myths — lies, even…

I challenged two deeply held dogmas: the role of carbohydrate in nutrition and the diet-heart hypothesis that saturated fat causes heart disease. I expected that my colleagues in the medical profession and in academia, including my own university, would be intrigued. They would want to know why I had changed my mind. They would be open to dialogue on matters of science and evidence-based medicine. They would want to learn. I could not have been more wrong.”

In 2012, Professor Tim Noakes was put on trial for challenging mainstream dietary beliefs. When he began exploring, researching and sharing the benefits of turning the conventional food pyramid upside-down, his life was also turned upside-down. He experienced vicious professional and personal persecution, and brutal attempts to silence him. Noakes was investigated for half a decade by the Health Professions Council of South Africa for misconduct. He finally won his case in 2017, and then wrote a book called the Lore of Nutrition, exposing the medical and scientific code of silence that exists in the world of nutrition. 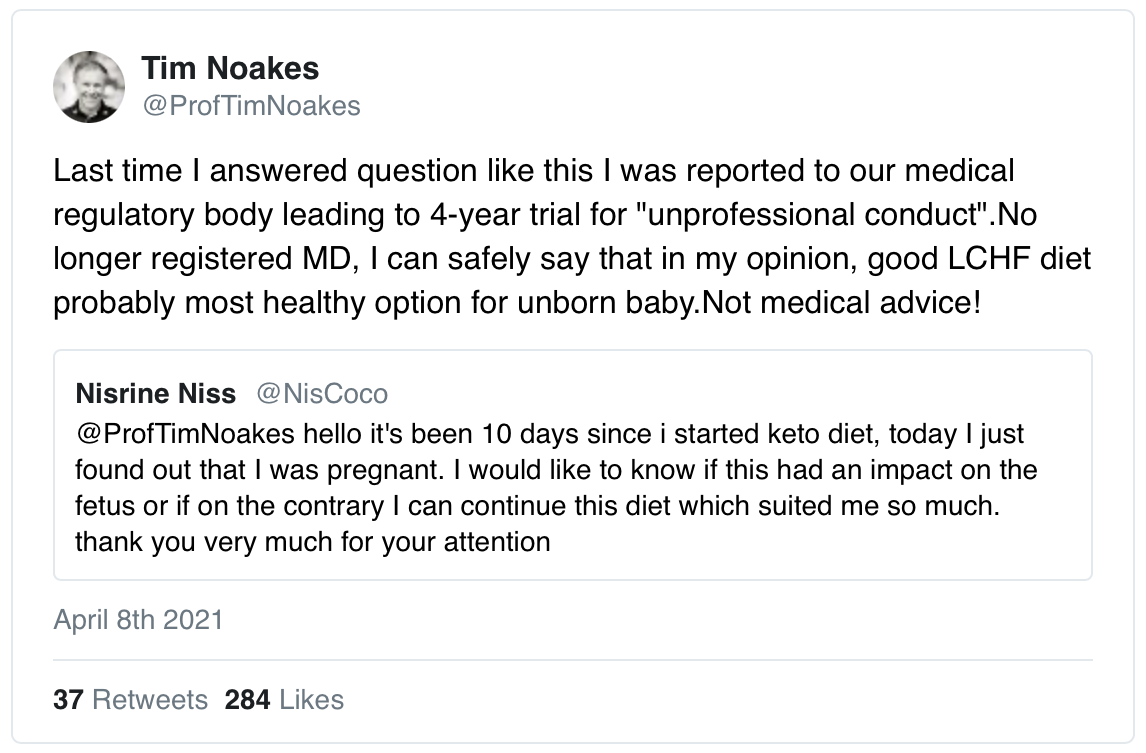 The last few decades of conventional high-carb, low-fat eating that Tim Noakes was challenging has undoubtedly resulted in the obesity and diabetes epidemic of today.

This food theory was originally based on the faulty pseudoscience of Ancel Keys, who claimed in the 1950s that “Middle-aged men, seemingly healthy, were dropping dead.”

The biochemist Ancel Keys was kind of like the Chicken-Little Fauci of the Eisenhauer presidency. He swooped into the rescue when the president had a heart attack, naming the new enemy, Saturated Fat, and stirring heart disease panic that paved the way for decades of terrible nutritional science.

Keys cherry-picked data from a few countries that would support his preconceived conclusions about diet, and ignored the variables that would throw off his charts. His shoddy studies resulted in the mainstream, government sponsored, corporate-subsidised nutritional guidelines that are extremely detrimental to good health. 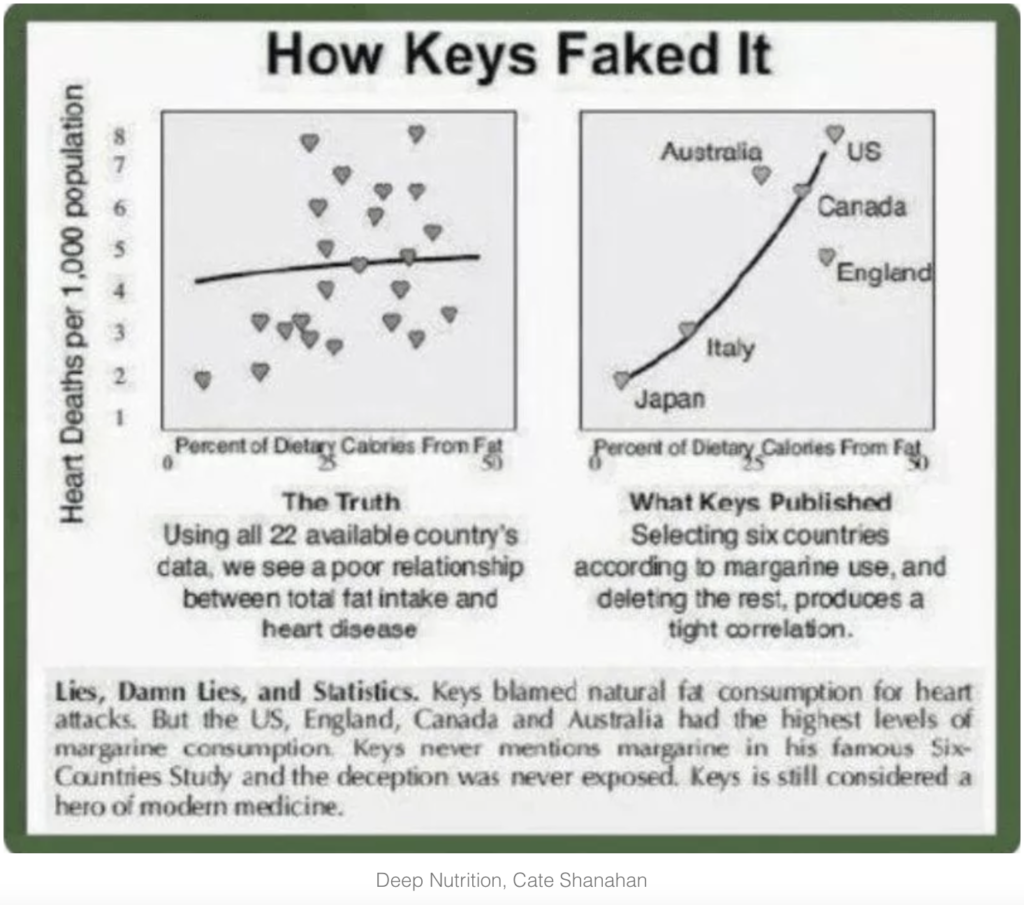 In exactly the same fashion, pseudoscientific publications about the efficacy of non-pharmaceutical interventions for covid like lockdowns, mask mandates and distancing involve cherry-picked data from specific countries, missing variables, and tweaking of information in order to fit the popular narrative. Those are the papers chosen to back the government’s mandates and public health orders, while policy makers worldwide ignore robust evidence to the contrary.

Governments continue to produce food pyramids that promote high-carb, low-fat diets, despite strong empirical evidence that low-carb, high-fat intake results in remarkably improved health markers, leaner bodies, lower cholesterol, and chronic-disease reduction. Despite the propaganda, with the increasingly decentralised access to information, we have seen an explosion in low-carb eating trends in the last decade or so. Keto, carnivore, LCHF, intermittent fasting, and all kinds of alternatives have resulted in people taking their health into their own hands. They are losing weight, feeling good, and no longer relying on information about food from governments, who have clearly been lying to them for decades.

Meanwhile, The Coca Cola Foundation pays millions to influence health recommendations, including gigantic donations to the American Diabetes Association and the CDC, among others. They are notorious for subsidising nutritional studies in order to produce the desired results. In food politics, Big Food, Big Pharma, and Big Government are the winners, colluding to support their own interests, while sacrificing the health of the people. 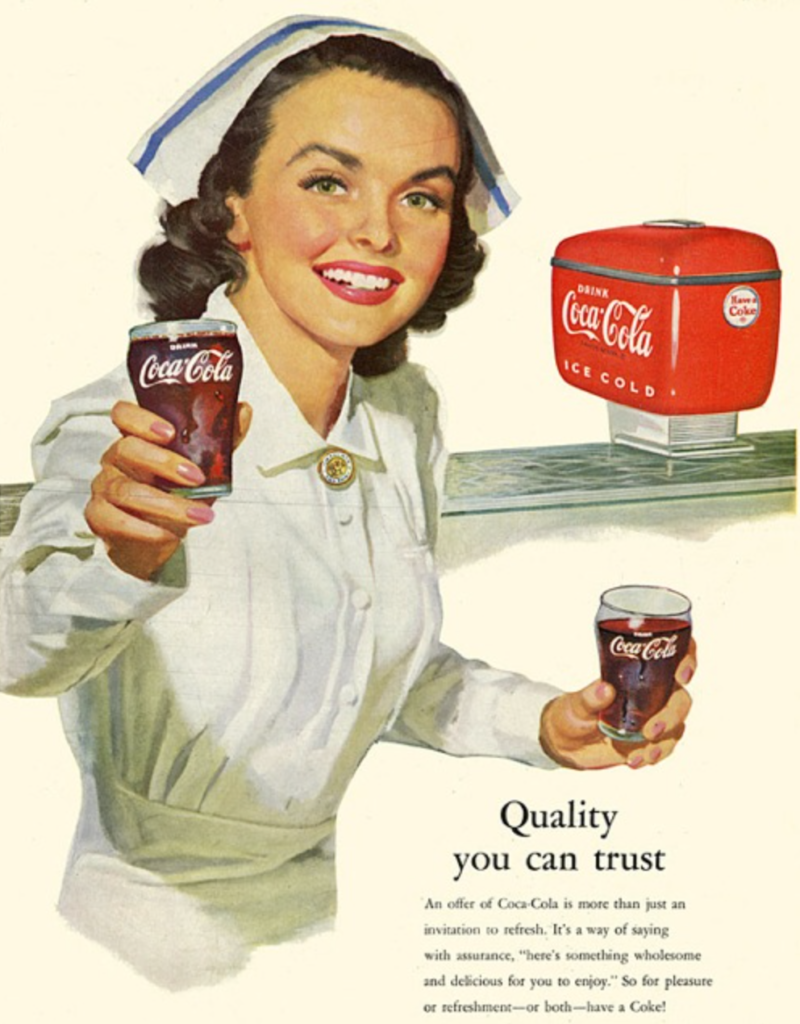 In the same way Big Food funds studies about nutrition, Big Pharma funds studies about injections. Despite the visible evidence of incommensurable harm, such as the skyrocketing health issues, psychological hurt and excess deaths associated with Covid lockdowns and supposed cures, governments continue to lie to citizens about what is good for their health.

Blood pressure and cholesterol pills come before evidence-based dietary intervention or prevention. Covid injections for everyone, indiscriminately, including healthy children with extremely low clinical risk, instead of T-Cells and immune systems.

The purposeful misinformation about food led to the diabesity epidemic, resulting in a needlessly sick population. The propagandised covid falsehoods, the catastrophic lockdowns, and the coercive pharmaceutical and non-pharmaceutical interventions are destroying and dividing the whole of society, creating a new epidemic of physical, psychological and emotional illness.

Any medical professional or scientist who contradicts the current dogma may fall victim to the same fate as Dr. Noakes; severe professional and personal risks, repercussions, and censorship. There is indeed a toxic code of silence stifling healthy scientific debate surrounding the Lore of Covid.

In the Lore of Nutrition, Professor Noakes tells his readers “that all people are entitled to their own opinions. But not to their own set of facts. So do not believe what you want to believe. Believe what the facts tell you is the truth. For in the context of junk diets, embedded scientists, corrupt — or simply ignorant — doctors and dieticians, human health and omertàs, what you believe about your personal nutrition will determine not just how you live, but also how you die.”

Substitute apples for coronaviruses, and the same applies for the context of junk virus science. The bottom line is that current governments and highly political organisations do not want the people to be empowered, informed, and independently healthy or wealthy. They are the few, and we are the many, and a potential army of strong, fit and knowledgeable citizens is the biggest threat that they can face.

May the facts empower people with the truth, and the people take their health, and their liberty, back into their own hands.